Remarks for Kresge Arts in Detroit Fellows award celebration: Welcome to the scene

Thank you, Christina. And thanks to our Kresge Artist Fellow Michelle May and her bandmate Rydell Smith for their performance and to the members of the Kresge Detroit Program, other Kresge staff here and to our philanthropy and nonprofit colleagues who are here.

And thanks to our friends here at Wasserman Projects for opening up for us today and for having us here to a sneak preview of this exciting exhibit.

I want to say a special thank you to someone that not many of us know but who we’re going to get to know very well, Don Tuski, the new President of the College for Creative Studies. I am going to go out on a limb and say that if we don’t scare him away this evening and give him pause to reconsider leaving Portland, Ore., well, then he’s going to become a fixture at these events.

Don’s academic backgrounds, for those who don’t know, includes a masters and a Ph. D in anthropology. That’s a discipline known for field work with hunter-gatherers, nomadic herders and – more recently – Wall Street traders, hipsters and other dangerous tribes. No doubt, this equipped Don with an intellectual framework for the culture of Olivet College where he spent 25 years in a wide variety of roles up through the presidency. Likewise, I’m sure it helped during his presidency of Maine College of Art and Pacific Northwest College of Art. And, as of last week, he could begin putting it to use at the College of Creative Studies.

My suspicion is that the opportunity to associate with this particular program was one of the selling points for CCS. But I could be seeing through rose-colored glasses. In fact, it could be one of those things that new employer neglects to mention as part of the job.

But it goes without saying, Don, that we couldn’t have built what we have here with the concerted and consistent support of your immediate presidential predecessor Rick Rogers and the team that Michelle Perron and now Christina DeRoos have built at the Kresge Arts in Detroit office under the auspices of the College for Creative Studies.

Don, I will admit that is a little challenging to sum up quickly what it is that’s been created by Kresge Arts in Detroit. We can throw out numbers. Last year we celebrated a decade of support for individual artists, for an Eminent Artist each year along with our new classes of Kresge Artist Fellows and Gilda Award winners. 10 years, 200 artists, $5 million and counting was our slogan to mark the decade.

And when we leave here tonight, the count will be 11 years, during which we will have shared more than $5.5 million among 221 artists. Which is to say, 20 Detroit artists will collectively be $460,000 richer after we hand out checks in the next 90 minutes.

Yet, many artists will tell you that the money is less important than the professional practice support that is provided to artists. Time and again artists tell us that the new perspectives they gain about how to make a living as an artist reaps benefits years beyond when the money has gone. Gone where? We know that artists have spent money on everything from repairing a roof over their heads to funding projects, to travel, to research, to just affording time to chill.  And along with the professional development and the money, artists tell us the imprimatur of being a Kresge Artist Fellow counts for a great deal; once named a fellow, you can no longer be mistaken for someone who just happens to dabble in a little art on the side.

But despite what we say here this evening about support for individual artists, I can say also say to our fellows, it’s not just about you.  Myriad benefits flow outward from the individual artists to networks and circles of fellow artists, to art scenes, to arts communities and to the grand art community … and on to the metro Detroit community writ large and … yes … to the world.

Artists have been instrumental in changing the nation’s sense of the Motor City, from a city living in the shadow of its past, to a city celebrating its roots and traditions while also creating new possibilities for its future. Kresge Arts in Detroit and the other foundation and nonprofit efforts across the city that have joined us in supporting our artists, in a sense, offer a stage, but we never mistake the stage for the show. Which is to say that that without the strength of this city’s artists — without the vibrance of its arts community that flows from that — all the support in the world would not have mattered.

And the vibrance of our arts community is clear in so many places today. You can see it in the performers on this stage tonight, in the exhibit around us featuring more than a dozen of our Kresge fellows. You can see it in fellows’ participation in Cranbrook’s massive “Landlord Colors” project, and in Detroit Arts Week and the Concert of Colors and the Detroit Jazz Festival. You’ll be able to see 22 Kresge Fellows in performances and exhibitions across the city of Detroit in the AXD series which begins next month and runs through the end of the year. The list goes on.

So, Don, to get back to the anthropological frame, you might consider tonight a rite of passage. And once initiated, we hope you’ll be back to join us for the rituals again and again.

Welcome to the stage … 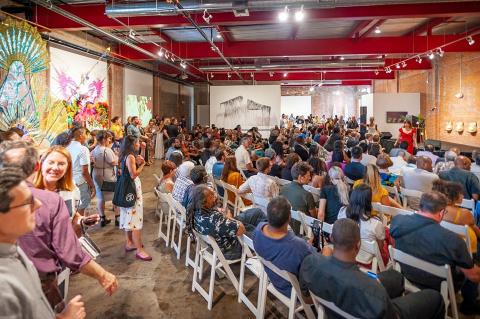 The 2019 Kresge Arts In Detroit award celebration took place at Wasserman Projects, the site of the Parallel Visions exhibit that features a small group of artists from the 2009 to 2018 Kresge Artist Fellows. (Photo: Kate Gowman)