Detroit: The sharp edge of innovation

Good morning. Thank you for participating in such an historic event – one that will fortify and help accelerate the trajectory of renewal so in evidence over the last three days.

For my part in this welcome-back, I want to endorse the notion of a community in the midst of profound positive change – a community working at the sharp edge of innovation because its very survival depends on it.

I head a foundation with deep roots in Detroit, going back 90 years into the city’s past. So I want to give you three examples of how Kresge and its partners are using a very different kind of thinking to help the city re-imagine its future: public transit, entrepreneurialism and neighborhood land-use.

So first, transit. There is probably no place in America that’s been seen as more hostile to public transportation than the Motor City. Philanthropy and the private sector have taken the lead in changing that.

Shortly after I arrived at Kresge some eight years ago, I had lunch with Roger Penske to discuss ideas for his next civic project. I suggested to Roger that this community desperately needed a light-rail system running along Woodward Avenue – the region’s spinal cord. It would be the down payment on an effective regional transit system so tragically missing in our community.

Roger took the idea seriously and acted with urgency, convening a couple dozen civic leaders to discuss the possibility of a private-sector consortium taking the lead. The problem was the price tag: $100 million just for construction. So Roger looked at me and said that if Kresge would be willing to invest the first $35 million, he would work to find the rest. It was a crazy idea, really – municipal governments build streetcars; foundations and private businesses don’t – but the audacity of the aspiration justified the risk, it seemed to me, so I agreed and we moved forward together.

We quickly formed a philanthropic-private sector partnership that has had to navigate a seemingly endless cascade of obstacles – bureaucratic resistance, engineering complexity, delays and cost increases. You name it. But we’ve raised $175 million; secured other forms of federal, state and local support; and accomplished what no city in America ever has – a light-rail line planned and predominantly financed by the philanthropic and private sectors. Now that the project is underway, the excitement is palpable.

The line, called M-1, will change lives in Detroit. A nurse recently told me that her colleagues will, for the first time, be able to live downtown without needing to own a car and be able to hop the line to their jobs at the Detroit Medical Center.

But we are also leveraging these 3-plus miles of rail to make possible the regional transit system that the people of this region deserve. It will connect to the high-speed rail line from Ann Arbor and Chicago. It will link to the fixed rail line running to the job centers of Oakland County. And its construction permits the state to count the funds raised for M-1 as the first $60 million of the local match the federal government will require for further funding of our regional system.

The second example is the creation of an entrepreneurial ecology.

You all know, better than anyone, that the outside world has defined Detroit for the better part of a century as a monoculture – the epicenter of the automobile industry’s universe. But strong, resilient communities require economic diversification. Six years ago, a group of 10 foundations, including Kellogg, Ford and Kresge, made the lead investments in what would become a $130 million fund – the New Economy Initiative – to promote that kind of diversification by creating an ecosystem to support the birth and launch of small businesses. At that point, it was the largest philanthropic fund assembled for any American city.

This effort has contributed to a breathtaking vibrancy – whether you see it building day-by-day or on your return after a long absence. Restaurants, tech firms, service businesses and arts activity are re-weaving the fabric of the city.

Chef Clinton Moore is a perfect example. He recently opened The Gathering, a small restaurant in Indian Village, a neighborhood that hasn’t had a sit-down restaurant in a dozen years. He said: “I’m bullish on Detroit. There’s a wide-open market for anything and everything to prosper.” That’s a view you’ll hear from entrepreneurs all over town.

So, small-business development – the second example of new thinking.

The third example is how we use land across the city’s neighborhoods. Kresge spent four years with a broad spectrum of community partners giving birth to the Detroit Future City plan, a blueprint for converting blighted or abandoned land into productive uses while reinforcing our nodes of strength.

The plan has helped us set an overarching course for the city. It permits us to nest within it efforts like the audacious and unprecedented campaign spearheaded by Dan Gilbert to address the city’s 80,000 blighted and vacant properties, which consume a landmass the size of San Francisco. By inventorying the condition of every single property in the city and creating a state-of-the-art parcel database searchable in scores of domains, the Blight Task Force creates a platform that can inform policymakers about which properties need to be demolished, which can be rehabilitated and which can be deconstructed and recycled.

The Detroit Future City plan, in turn, furnishes the necessary framework to prioritize and sequence how to go about that as we pursue the city’s next generation of residential, commercial, natural resource and transit redevelopment strategies.

The Detroit Future City plan also reminds us that we can’t focus just on the side of the equation that calls for blight elimination. We have to fill out the other side of that equation – by redeveloping green, healthy, active neighborhoods throughout the city. That’s exactly what Kresge and our other philanthropic partners are doing. Just a couple of examples:

Ann Burns, a resident of one of the more troubled neighborhoods in the city, characterized these kinds of activities this way: “I see a sincere desire to get things done for people who have been waiting for a long time.”

Detroiters have indeed been waiting a long time, an unconscionably long time, to see their life opportunities improve. The three examples of new thinking – public transportation, economic diversification and green, healthy, active neighborhoods – suggest that the wait may be drawing to a close.

But it requires that we enlist the support of people like you.

You’ve seen the extraordinary list of opportunities within the Detroit Prospectus. Let me offer just a couple of navigational suggestions. 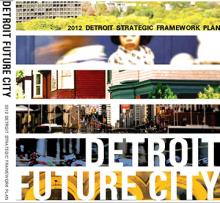 First, get oriented by reviewing the broad outlines of the Detroit Future City plan. This plan is the portal to the rest of the prospectus and a blueprint for the re-imagination of our city’s future. Drawing on the input of more than 30,000 Detroiters and the best thinking of eight professional teams, it offers a guide to economic growth, land use, city services, neighborhoods and other physical assets, as well as an approach to continuously engaging citizens to realize those strategies.

A second suggestion is to zero in on subject matter that inspires you:

The list is just a teaser, of course. The prospectus is merely a starting point for your imagination and passion: The most important outcomes of these three days will be ones that you dream up.

But whatever you do, stay tuned. New thinking is transforming Detroit.