Young adults have the unique expertise and experience that can help us discover the best solutions to our most difficult social problems. 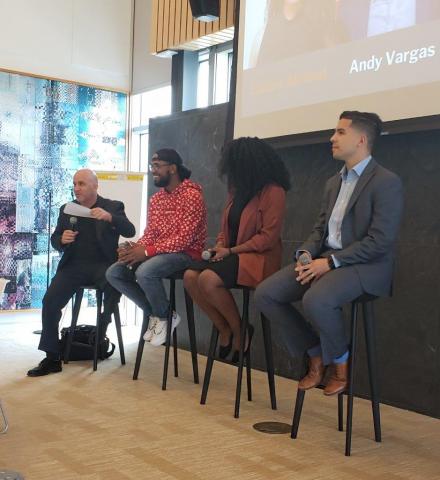 For the last 10 years, UTEC, part of The Kresge Foundation Human Services Program’s Next Generation Initiative, has coordinated Teens Leading The Way (TLTW), a statewide youth-led policymaking coalition which empowers youths ages 17-25 from low-income and immigrant communities across Massachusetts to create lasting change through policymaking.

Three former youth organizers with Teens Leading The Way, Carline Almond, Jefferson Alvarez and Andy X. Vargas, visited the foundation in September to share how they became leaders that campaigned for and achieved policy changes in their community.

The National Human Services Program invited these young adults as well as Gregg Croteau, UTEC chief executive officer and Geoff Foster, UTEC director of organizing and policymaking, as featured guests at the final event in the 2019 Cases to Faces series.

This series was designed to demonstrate the importance of person-centered systems change, which focuses on acknowledging and engaging individuals who have been subject to the system and driving systems changes that are needed to help families climb the social and economic ladder and achieve their dreams.

Getting educated, getting involved.

Civics education was one of the first issues youths selected back in 2009. While 39 states had civics or government requirements for high schools, Massachusetts did not.

Andy, who joined TLTW as a junior in high school, wanted that to change.

“It does not matter how passionate we are about an issue unless we have an informed and engaged electorate. We need to create ways for people to both understand that they have power and that they can use it to improve their communities,” Vargas said.

So teens organized lobbying days at the Statehouse, spoke at hearings, and worked closely with legislators to try to get a bill to mandate civics education passed.

“I remembered feeling cynical walking into the statehouse for the first time, but I left feeling hopeful. I felt listened to,” Vargas said.

And they nearly succeeded. However, the bill died in the Ways and Means Committee, Vargas explained.

“It was discouraging, yes, but we moved the ball forward,” he said.

But Andy did not give up. He got elected. After graduating from Boston University, he was elected as the first Latino city councilor in Haverhill, MA at age 22, and in 2017, Andy was elected to serve as Massachusetts state representative for the 3rd Essex District.

One of the first things he did after becoming a state representative was work with his new colleagues to revisit the civics education bill. The day the House of Representatives decided to send the bill to the governor’s desk, State Representative Vargas gave his maiden speech before the body before casting his vote to pass the bill in November.

In 2018, nine years after the campaign began, Governor Charlie Barker signed the “Act to Promote and Enhance Civic Engagement” into law. This law mandates that American history, social sciences and civics be taught in public schools and requires public schools to implement student-led civics projects for children in eighth grade and high school.

Carline Almond also became a youth organizer at UTEC while still in high school. She said what spurred her to get involved was the lack of direct communication between administrators and the more than 5,000 students at Lowell High School.

“If 17-year-olds were able to vote, they could decide on things that affected them in their schools and communities,” Almond said. “We could have a voice.”

Through the “Vote 17” campaign, teens fought for a bill to allow 17-year-olds to vote in school and city council elections. They knocked on doors, they sent emails and visited the state capital, all in an effort to get lawmakers to support their cause.

Despite their efforts in advocating for the bill’s passage in the Senate, the legislation ultimately did not pass. However, the campaign received national recognition and has been directly cited as inspiring the first communities across the country to implement a lowered voting age for municipal elections.

Carline also took that experience with her to college and is now the executive assistant to the president of the Massachusetts State Senate.

Relationship building was one of the most important skills she learned as a youth organizer, Carline said.

“I want people to be civically engaged and get more engaged in the political process,” Carline said. “I want to make politics not so scary.”

A juvenile court record can haunt people long past their initial punishment, preventing individuals from getting financial aid for college, a job, or a place to live. In Massachusetts, young people did not have any way to expunge their criminal records, even when charges are dropped.

For Jefferson Alvarez, the issue was personal. A criminal record has impacted his ability to get a job.

“I need expungement,” Alvarez said. “I want to erase my sentence, so I can write a novel.”

Jefferson has worked with UTEC and Teens Leading The Way for more than three years to fight for expungement to be a part of criminal justice reform legislation.

After Jefferson and teams of young people made countless trips to the statehouse to lead the charge for change, Governor Barker signed a sweeping criminal justice reform bill into law that included expungement for juveniles and young adults under age 21 in April 2018. Under this policy, youth are only eligible if they have a single court appearance, which disqualifies Jefferson and nearly all of his peers at UTEC.

To this end, the fight is not over. In January 2019, UTEC and its coalition partners filed a new “expungement 2.0” bill that awaits a public hearing.

“Expungement is the shoe that fit me. I’ve put one shoe on, now I have to put the other one on and keep fighting,” Alvarez said. “We have more work to do.” 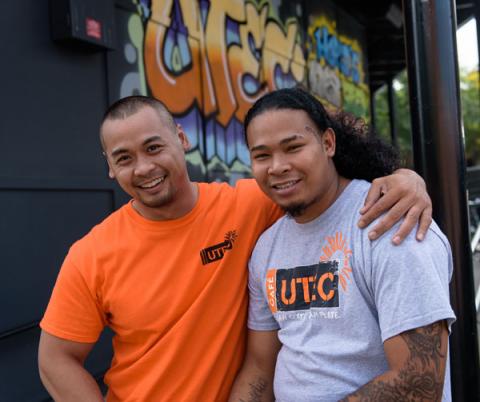 But UTEC’s success is not 100 percent defined by bills signed, Croteau said.

By helping young people overcome the very real challenges of poverty, gang involvement, unemployment, and other cultural barriers though a comprehensive model of outreach and peacemaking, social enterprise-based workforce development, whole-family engagement, transitional coaching and referrals, UTEC reduces recidivism, increases employability, and helps families climb the social and economic ladder. UTEC achieves this through what they refer to as “madd love.”

For UTEC, madd love is the intentional output of relentless positivity. It is the belief that everyone has a core of goodness and that everyone deserves acceptance, community, and love. As Foster describes it, “It is this foundation that the UTEC model is built upon and without it, UTEC would not succeed. When a young person feels part of a community, or even a second family, we know that positive outcomes are possible.”

And as Croteau points out, "Due to varied circumstances often out of their control, our young adults do not receive the same opportunities of many of their peers. The field is not a level one, but one that is unfortunately too often slanted upwards. Through the provision of our core value of madd love, UTEC works to ignite that contagious passion that we know young adults inherently possess to make transformative individual and systems level changes. And by bringing their own madd love to every campaign they work on, their passion infectiously inspires others, both policymakers and other young adults who have yet to walk through our doors."