Statement: Philanthropy must use its voice to counteract hate

A statement from President and CEO Rip Rapson

We at The Kresge Foundation are heartbroken for the victims and families impacted by the hate crimes perpetrated at the Tree of Life synagogue in Pittsburgh this weekend. The Anti-Defamation League, which Kresge supports, reminded us that this was the deadliest attack on the Jewish community in this nation’s history. We extend our deepest sympathies to our Jewish friends, grantees, and philanthropy partners in our hometown of Detroit and across the United States who are grieving.

These murders were the culmination of a chillingly violent week in which a hate crime killing in Kentucky cost two black Americans their lives and a would-be assassin targeted some of our nation’s preeminent leaders.  Tragically and painfully, these actions speak to a deeper malignancy afflicting our country. 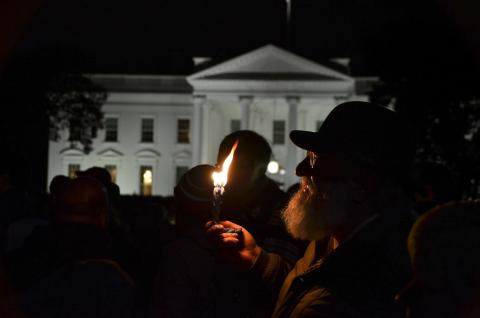 Havdallah Vigil on Oct. 27, 2018 for the Tree of Life Synagogue, in Lafayette Square across from the White House in Washington, D.C.

We too often bear witness to the corrosion of this country’s norms of decency and mutual respect, to the visceral tendency to vilify those whose religion, skin color, sexual orientation, ethnicity, or political affiliation differs from our own, to the rush to facile judgment about issues that demand balanced, reasoned response. We see in increasingly clear form a menace to the very foundations of our democracy.

The enormity of these forces is an invitation to silent despair. But we simply cannot succumb to that temptation. We can and must grieve and pray and search for meaningful acts of kindness and compassion. We must be vigilant in the face of cruelty and insensitivity. We must forge and strengthen unbreakable alliances to fight any and all acts of hatred.

Now is the time for the philanthropic sector to use its voice and its resources to those ends. Forcefully. Unequivocally. Relentlessly.

Even more than in the past, we must align our resources with those in the nonprofit sector who work for healing, who build the sinews of mutual assistance and fortify the animating energies of community life, who summon the courage to thwart the rise of bigotry and racially and ethnically motivated violence.

And it is imperative that philanthropy use its vast privilege to vocalize what others cannot – or will not. That our values brook no tolerance of behavior incited by hate and fear, that they refuse to acquiesce to the invidious shredding of our social fabric, that they will activate in the presence of discrimination and injustice, fear-mongering and intolerance, hatred and violence in any form.

We call upon all of philanthropy to join us in the fight to dismantle the pervasive and persistent racial, economic, social, religious, ethnic and political barriers that prevent the full realization of our democracy and the hopes and dreams of all of its citizens.  Philanthropy’s fundamental reason for being cannot countenance any other path.