The passing of Judge Damon Keith is a time for the nation and our region not only to mourn, but also to reflect. Our heartfelt and extended observances in Detroit are entirely in keeping for a man who, as one obituary summarized, was a “fountainhead of regional rulings with national implications.” And even beyond those rulings, he was a regional force of incalculable importance. 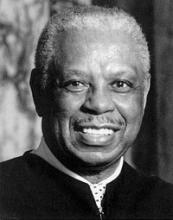 Born here – a grandchild of former slaves, a child of the Great Migration of African Americans from the South – he made his understanding of place and history hallmarks of his life. He made indelible imprints on the Detroit Chapter of the NAACP and the Charles H. Wright Museum of African American History, just to name two Detroit institutions close to his heart and to which he made outsized contributions.

His logic, perspective, and sense of justice live on in numerous former law clerks and other mentees recording their own signatures in law, in politics, and in other spheres of leadership. His decisions and rulings regarding school desegregation, warrantless searches, admissibility of evidence, affirmative action, and secret deportation hearings are pillars of twentieth century jurisprudence, a beacon of fairness, equality, and justice. His assertion that “democracy dies behind closed doors” ­– made in the deportation hearing case in 2002 – packed a philosophy of government transparency into five succinct words.

Yet, observance of Judge Keith’s passing requires more than a celebration of accomplishments. The judge was unequivocal in addressing the challenges of today’s political climate, challenges that run counter to much of his legacy. Just two years ago, at age 94, his dissent in an Ohio voting restriction case called attention to states “erecting hurdles to the right to vote” creating a situation in which “many people hold the misguided belief that only the privileged majority should be granted access to political power and adequate representation.” Given the tension between undeniable gains in the pathway to equality and stubborn and invidious tendencies to retreat from those gains, Judge Keith wrote, “we can never fool ourselves that we have arrived as a nation.”

To honor such an extraordinary life, we can do no less than consider his example and rededicate ourselves to the principles he stood for with transcendent courage: civil rights, liberty, equality, justice and basic decency.

Kresge Eminent Artist Leni Sinclair was involved in one of Judge Damon Keith's key cases. She reflects on the judge and his legacy.