Putting people at the center: A transformational approach to law enforcement in Prince George's County

In order to curtail crime, cities and counties need to do more than just respond to crimes when they occur; they also have to address the underlying social and infrastructure issues that contribute to crime in the first place. How are the people?

In Maryland, Prince George’s County Police Department Chief Henry “Hank” Stawinski is doing just that. The Kresge Foundation’s Human Services program invited Stawinski to the foundation in August to share how his department transformed its approach to law enforcement, which involved concentrating a range of governmental resources, including police, fire, health, social services and education, in six high-need areas.

“It’s deceptively simple,” Stawinski said. “It does not cost anything. But it takes people, and consensus building and will. It is hard work. The biggest component is deciding something can be done in the first place.” 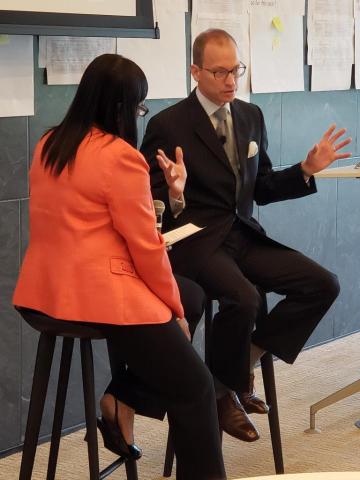 Stawinski was drawn to law enforcement from an early age. His father, a former Marine, joined the Prince George’s County Police Department in 1956, so Hank grew up watching how his father worked with people in the community.

Having earned a degree in biology from Boston College and a master’s degree in management from The Johns Hopkins University, Stawinski first worked in a medical examiner’s office before entering law enforcement.

“I was looking for innovative ways on how to approach problems,” Stawinski said.

Crime is like an iceberg. The criminal act is just what you see on the surface. Below that act are all the factors in a community – education, health care, housing, human services, jobs – that contribute to it.

Stawinski explained that if you look at crime like you would a disease such as the flu, once you have an outbreak, it’s too late. The same concept applies to crime.

“We started thinking to ourselves, ‘Let’s take a page out of epidemiology.’ If you’ve a got a disease outbreak, determine the conditions that lead to it and interrupt any or all of those conditions, you either mitigate or prevent the outbreak altogether,” Stawinski said.

The county started with looking at how people in the community were doing, taking a person-centered approach.

“Building trust and relationships in the community was crucial, Stawinski said. Prince George’s County is very diverse, and with that, comes a host of historical traumas and perceptions when it comes to law enforcement.

“Most people do not talk to the police. If they do, the vast majority of the time is during a traffic stop, which isn’t a great situation for anyone. The time to give people a lens into an institution is not during a confrontation – there are opportunities before that,” he said.

So when Stawinski became chief, one thing he did was start the “Chief on the Go” community outreach initiative to build relationships between the department and the community. During these monthly engagements, the department operates out of a mobile unit at different locations throughout the county.

“We run the department out of a bus” Stawinski said.  “We go to community meetings, we go to hospitals, we go to town halls and we go to malls.”

In addition, the entire department has undergone extensive implicit bias training to both help officers stay safe and put people at ease.

However, Stawinski said, there are people in government who have that expertise. Why not let people do what they are good at and let police be police? He noted that while his team is committed to being a key partner in the effort, when it comes to addressing the many challenges faced by communities facing so many challenges, his officers at best were “enthusiastic amateurs”. It required folks who are trained to address the various social issues as they are far better equipped.

Because budgets are always tight, there wasn’t going to be any more money or equipment to tackle the problem. So Stawinski worked with county officials to conduct an inventory session to evaluate the people and resources that Prince George’s County already had.

“Without spending any additional money, you can marshal the resources you have and get results from it,” Stawinski said.

They decided that instead of taking on one issue across a broad area, they would tackle a range of issues in six specific communities using the assets they had.

In the spirit of telling people what to do, not how to do it, the county put subject matter experts on the ground with the inventory list and asked them to work with the community to find out what needed to be done.

“We got everyone’s input,” Stawinski said.  “It’s like intensive care for a community. We want to get that community out of intensive care. And if we make one community a little better, then another one, it’s the domino theory. You can use this methodology anywhere.”

As someone with an avid interest in space and space travel, the chief thinks that we can once again harness the pioneering spirit that took us to the moon and beyond.

“Let’s start helping people stop looking at what is in front of them today and think about the future,” Stawinski said. “Anyone can change the world, but we want to change the world in a way that matters and has an impact.”