Rauhauser has devoted more than 60 years to “being there” – being present and engaged on the city’s streets, inside the studio and inside the classroom. He joins five other artists who have since 2008 received the award and $50,000 prize in recognition of professional achievements, contributions to the cultural community and dedication to Detroit and its residents. 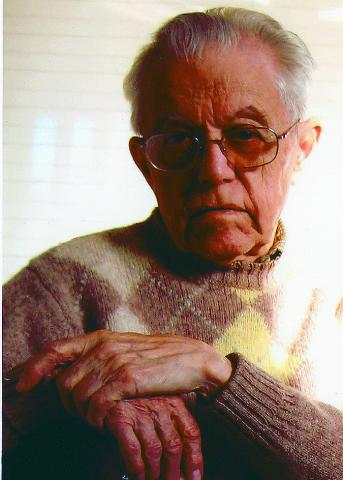 Rauhauser is a uniquely literary photographer. As he tells it, the camera shoots what it sees, neither true nor false. He has devoted decades to capturing what he describes as “a society in constant motion, with people on the streets keeping busy – like ‘Waiting for Godot’ – to forget that life is ending.” (See a Kresge Foundation monograph celebrating Rauhauser's life and work.)

At 95, the artist is energetic and colorful. Receiving the Kresge Eminent Artist award, he says, is an “honor that really turns me on.”

Rauhauser’s photographs have appeared in numerous exhibitions, most notably the influential Family of Man exhibition in 1955 at the Museum of Modern Art in New York, at the Archives of American Art at the Smithsonian Institute in Washington and at the Detroit Institute of Arts.

His photographs are currently on display in an exhibition titled “Bill Rauhauser Street Beat: Detroit Photographs c. 1950-1970,” at the Carl Hammer Gallery in Chicago. An exhibition at the historic Scarab Club in Detroit is forthcoming.

Five books of his work have been published:

He has curated three exhibitions at the Detroit Institute of Arts, where he serves as artist advisor for the board of directors of the department of prints, drawings and photographs.

“Photography cuts out the static and distractions to show us a person, a place, a slice of a community or society in revealing ways, and Bill is a master,” says Rip Rapson, Kresge’s president and CEO. “His street photography provides a rich record of the people, times and culture of Detroit. It’s a remarkable body of work. And Bill’s three-plus decades as a teacher have allowed him to share his craft and his passion with many, many others.”

The foundation’s Eminent Artist Award is part of its Detroit Program, which uses a comprehensive framework for investing in efforts to foster long-term economic opportunity that advance social equity, promote cultural expression, and re-establish Kresge’s hometown as the center of a vibrant region. The Eminent Artist Award and Kresge Artist Fellowships are administered by the College for Creative Studies in Detroit.

The classroom of life

Born in Detroit in 1918, Rauhauser earned a bachelor’s  degree in architectural engineering from the University of Detroit in 1943. He devoted 18 years to that career before giving it up for life as an educator. The artist credits his late wife, Doris, a teacher herself, for supporting his abrupt shift in careers.

He served for 30 years as a teacher in the photography department at the College for Creative Studies, where he is a professor emeritus. He taught for four years at Wayne State University and spent one year as a guest lecturer at the University of Michigan in Ann Arbor.

“Bill Rauhauser ranks with the greatest photographers of his generation, but has not received the recognition he deserves,” says Richard Rogers, president of the College for Creative Studies. “Though he photographed largely in Detroit, his images tell a universal story of the beauty and nobility to be found in everyday life. His work as an artist is matched by his achievements as historian, curator and teacher.  He is an inspiration to photographers and photography lovers alike. The College for Creative Studies is so proud to participate in honoring its esteemed former faculty member as the Kresge Eminent Artist of 2014.”

Life as an educator afforded Rauhauser the opportunity to spend more free time as an artist, but he never took a sabbatical during his 35-year tenure. For Rauhauser, the classroom was a way of life.

“Having a captive audience for three hours to talk about photography, I knew it was for me,” he says. “In my first class, I was into it for 10 minutes and then I stopped talking. I thought to myself, ‘This is what I got to do.’ If I could teach until I was 150 years old, I would do it.”

The artist continues to work from his home studio and, although he has retired, continues to give the gift of teaching. Sitting in his living room, surrounded by books on art, history and philosophy, he shares his “iron laws of street photography:”

Rauhauser recalls the moment that photography shifted from a pastime to his life’s work. As an engineer, he traveled to New York on business and set his itineraries so that Saturday and Sunday were free for shooting and soaking up Manhattan. On one visit, he saw an exhibition by Henri Cartier-Bresson. In the catalog, Bresson noted what were – for Rauhauser – the magic words: Photography isn’t a hobby. It is the art of seeing.

Rauhauser has chosen to only shoot people in black and white. “Color is distracting,” he says. “The only way you can really see life for what it is, is in black and white.” He spent nearly every weekend of his artistic career walking the streets of Detroit, and sometimes Chicago, shooting strangers in the crowd with his Leica camera.

One of Rauhauser’s favorites is a portrait of a homeless man on the streets of Chicago. The haggard looking individual, when confronted by the photographer, assumed an upright, proud position. “It knocks me out every time,” he says. What interests Rauhauser is the capacity of the medium to convey human character. Every image, just like every word in a book, has a culture behind it.

In the 1940s he began a series of portraits featuring houses in Detroit and has amassed a collection of 400 images. The negatives are archived in the Burton Historical Collection of the Detroit Public Library. Also in the1940s, he turned his lens to the aisles of grocery stores, pre-dating Andreas Gursky’s iconic 99 cent diptych by more than half a century. In 1964, Rauhauser opened what was perhaps the first gallery devoted to photography in the Midwest.

Rauhauser recently picked up a project he began working on several decades ago. He is in the midst of developing a cache of still-lifes featuring such ordinary objects as a small part from a sewing machine, a screw, an umbrella and a ruler. These images are studies in the purity and exactitude of form and serve as a bridge to understanding his continued passion for architectural engineering.

“If my photos last 1,000 years, people may not know what someone is doing in it,” he says. This is a challenge inherent in the art form that he relishes. Truth, just like beauty, memory, and other manmade concepts we rely on to make it through life, is in constant flux.  “Every man has his own language,” he says. “Again, a photo just is.”

The Kresge Eminent Artist Award is unrestricted and is given annually to one artist who has lived and worked in Wayne, Oakland or Macomb counties for a significant number of years.

The 2014 recipient was selected by the Kresge Arts in Detroit Advisory Council, a volunteer group of leaders in the metropolitan Detroit cultural community. Its members are: