At a news conference on Monday, New Orleans Mayor LaToya Cantrell, NewCorp Inc., and the New Orleans Business Alliance joined business and philanthropic partners, including The Kresge Foundation, to announce a new $5 million BuildNOLA Mobilization Fund that will provide critical access to capital for entrepreneurs of color and women to participate in public infrastructure projects, create more jobs and grow the New Orleans economy.

Over the next four years, the city of New Orleans expects that $2 billion in public dollars will be spent on streets and subsurface drainage and approximately $250 million will be spent on green infrastructure projects. In 2013, the city passed an ordinance establishing a goal that 35 percent of these kinds of public infrastructure contracts will go to Disadvantaged Business Enterprises, or DBEs. The BuildNOLA Mobilization Fund opens the door for entrepreneurs of color and women to compete for these city projects.  More successful contract awards add scale and capacity for local small businesses, said Cantrell's office. 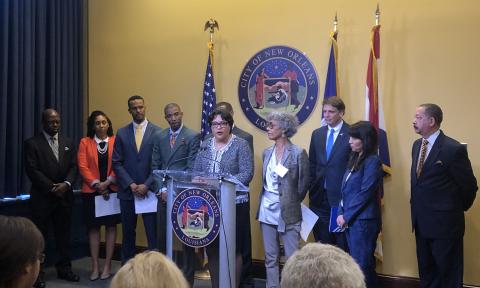 “The BuildNOLA Mobilization Fund is a big win for the people of New Orleans, and for businesses owned by entrepreneurs of color and women – who will get needed access to capital that enables them to perform on public contracts,” said Mayor LaToya Cantrell. “This is what it looks like when we stand together with our business community to move this city forward. We’re creating jobs, we’re investing in our people, and we’re making it possible for small businesses to get their fair share.”

NewCorp Inc., (NewCorp) a community development financial institution (CDFI), will manage the fund. Liberty Bank invested $4 million in the Fund and Kresge provided a $1 million program-related investment loan from its Social Investment Practice, in partnership with the American Cities Program. The City of New Orleans contributed $250,000 for the fund’s loan loss reserve, reducing the risk for these funders. JP Morgan Chase Foundation provided a $225,000 grant for operating support. Finally, the Greater New Orleans Foundation and the Foundation for Louisiana provided funds for technical assistance services to loan applicants and recipients that will be taking on green infrastructure projects.

“This fund will strengthen disadvantaged businesses’ ability to bid and execute on a pipeline of public contracts and access roles as prime contractors. We support it because we believe, over time, it will build wealth among New Orleans-based businesses and the New Orleanians they employ,” said Rip Rapson, president and CEO of The Kresge Foundation. “Inclusive growth in cities such as New Orleans depends on ensuring business and job opportunities benefit residents with lower incomes.”

NewCorp has a long record of accomplishments supporting entrepreneurs through increasing available credit, investment capital and financial services. Specifically, through the fund, NewCorp will review applications, provide technical assistance, grant credit lines, and ensure loan repayment. The City of New Orleans acts as a conduit for many applicants to the fund, often identified through the City’s BuildNOLA small business technical assistance program.

“Access to capital and opportunity is a major barrier to economic competitiveness amongst small contractor businesses in general and in particular to businesses owned by people of color. The Mobilization Fund not only seeks to remove this barrier, but more importantly to provide the efficacy of alternative strategies and sources of capital to serve underserved communities and businesses that are forced to operate outside of the mainstream capital market place. If we, the primes, the financier and the small disadvantaged businesses get this right, it will change the trajectory of small contractors and enhance the earnings and expertise of the primes,” said Vaughn Fauria, president and CEO of NewCorp Inc.

As the city’s official economic development agency, the New Orleans Business Alliance is charged by Mayor Cantrell with growing the small business ecosystem in New Orleans. Since 2018, the Business Alliance worked with philanthropic leaders to secure the funding for this important initiative.

“A growing city is a city of thriving entrepreneurial businesses. For businesses, access to capital is like oxygen, providing life to revenue growth and increased hiring,” said Quentin L. Messer, Jr., president and CEO of the New Orleans Business Alliance. “A company that scales up can do more work, win larger projects and contracts, and ultimately share its successes with more of our friends and neighbors. As Mayor Cantrell stresses, we must be a 'City of Yes' and there is no more important area where more 'yes' answers are needed than in the area of growth capital. Today is an important step and we applaud the City of New Orleans and NewCorp, and are grateful for our financial investors within the fund.”

This new $5 million mobilization fund builds off a 2016 loan fund piloted as a result of a $1.3 million investment from Living Cities with the goal of increasing access for entrepreneurs of color and women to City of New Orleans projects. The evaluation of the pilot revealed that the fund enhanced recipients’ ability to deliver on their public contract by reducing immediate financial barriers and allowing the contractors to focus on providing high-quality services, as opposed to focusing on how to manage their contract with receivables only.  Based on this successful experience, local philanthropic leaders through the Greater New Orleans Funders Network Coastal Action Table worked with the New Orleans Business Alliance to raise the money for the Fund.

Businesses interested in the BuildNOLA Mobilization Fund should contact Peter Brooks at NewCorp Inc. by calling (504) 208-1700 or emailing peter@newcorpinc.com.

For the full news release, visit the City of New Orleans' homepage.