The Marygrove Conservancy today confirmed that a cradle-to-career campus, with programming scheduled to commence this fall, will continue despite the announcement that Marygrove College will end its graduate programs and permanently close in December.

The Marygrove Conservancy is a nonprofit organization established in 2018 to manage operations and steward the 53-acre Marygrove campus in the city. The mission of the conservancy is to stabilize and preserve the historic campus – which has served as an educational anchor in the heart of northwest Detroit for more than 90 years – while identifying high-quality uses in the community. 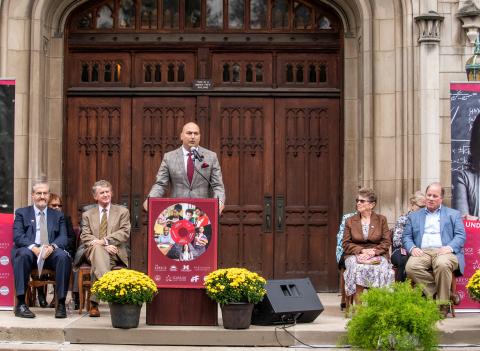 In September 2018, the conservancy announced plans for a landmark partnership and cradle-to-career (P-20) educational campus. The P-20 campus will include a new early childhood education center, a new K-12 school and the introduction of an innovative teacher education training program modeled after hospital residency programs.

The P-20 campus is being jointly developed through a partnership including the conservancy, The Kresge Foundation, the University of Michigan School of Education (U-M SOE), Detroit Public Schools Community District (DPSCD), Starfish Family Services and IFF. Marygrove College has also served as a partner in the development of the P-20 vision and will continue in that role until the college closes later this year.

“Marygrove College has been a leader in urban education since the college opened in Detroit more than 90 years ago,” said Marygrove Conservancy chairwoman Sister Jane Herb, who is also the president of Sisters, Servants of the Immaculate Heart of Mary (IHM) which founded and sponsors the college. “Knowing that the educational mission of the IHM will continue on this campus for generations to come makes us proud.”

The college began educating Detroit women in the 1920s and doubled down on its commitment to educate minority women in the aftermath of Detroit’s 1967 uprising. “That legacy will continue through the rebirth of this campus with a focus on the city’s youngest children and youth residents as early as this fall,” Herb said.

In September, a 9th Grade Academy will open on the campus with an inaugural class of 120 students. The new public school, operated by DPSCD, has been designed to develop critical thinkers and community-minded citizens who have the skills and knowledge to be makers and leaders in the 21st century. It is one of five examination high schools in the district. DPSCD and U-M SOE have co-developed a project- and place-based engineering and design curriculum to help students identify, collaborate and solve complex problems, and participate in the creation of a more just and equitqble future.

Nir Saar, an administrator in the district since 2015, will serve as principal of The School @ Marygrove. In addition, the district recently hired seven educators to staff the new school and instruct students in engineering, English language arts, integrated physical science, math, U.S. history and Spanish.

With a phased opening, the district expects to add a grade each year until all primary and secondary grades (K-12) are offered.

“All of us believe that the P-20 partnership will revive the spirit of the Marygrove campus while creating multiple pipelines of talent for all DPSCD schools. Our partnership will one day be a national model and part of the story of how the school district was rebuilt to provide children with the education they deserve,” said DPSCD Superintendent Nikolai Vitti.

U-M SOE is co-developing the instructional and operational model for the campus. Leveraging its nationally renowned educational research, faculty and staff have been deeply engaged with DPSCD to identify and curate a high-quality curriculum that will be put into practice at the high school this fall.

The university will also launch at the school a new teacher residency program modeled after physician training programs to prepare and train Detroit’s next generation of educators. Newly certified teachers who have completed U-M’s undergraduate or graduate teacher preparation program will have the opportunity to work alongside veteran educators as they continue their training.

U-M is engaging other academic units that may also offer support services for students and their families.

"I've enjoyed working with Dr. Burns and our partners at Marygrove College, said U-M SOE Dean Dr. Elizabeth Moje. “The strong network of other collaborators and our continued support from the Marygrove Conservancy – stewards of the beautiful campus – will carry this work along as anticipated. We will work even harder to assure that every opportunity we have planned is available."

The P-20 Partnership – one of the first in the nation – is backed by a $50 million commitment from The Kresge Foundation, marking the largest-known philanthropic commitment centered on education in a Detroit neighborhood.

The 53-acre Marygrove College campus in Northwest Detroit is the announced site of a landmark partnership and cradle-to-career (P-20) educational campus to include a new early childhood education center, a new K-12 school and the introduction of an innovative teacher education training program.

At full capacity, The School @ Marygrove and new early childhood education center (operated by Starfish Family Services) are projected to serve more than 1,000 Detroit children and their families, primarily living in the surrounding neighborhoods. Construction plans are underway for the state-of-the-art Early Childhood Center to be built on the campus and will be announced by the Marygrove Conservancy this summer.

“This investment places education at the center of community revitalization efforts in northwest Detroit, while preserving the strong legacy of the college in lifting up the thousands of women and men who earned credentials there and went on to enrich our community,” said Kresge President and CEO Rip Rapson. “This new 21st century educational model promises to not only produce high achieving and community-minded students, but also to invigorate a renewed faith and interest in this community which is integral to Detroit’s inclusive recovery.”