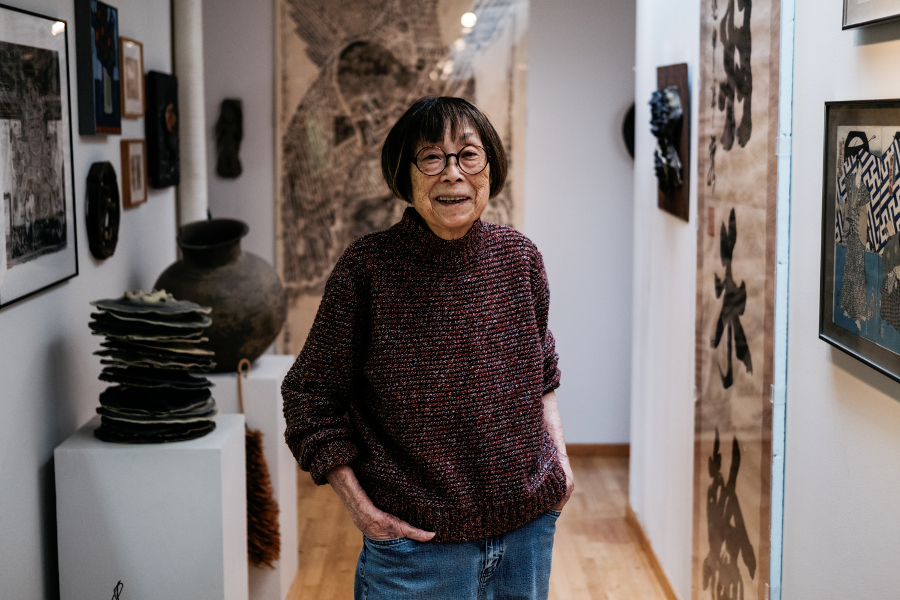 Marie Woo in her home in West Bloomfield.

Photo by Erin Kirkland for The Kresge Foundation

Ceramicist and educator Marie Woo has been named the 2020 Kresge Eminent Artist, an annual metro Detroit award recognizing lifetime achievement in art, which includes a $50,000 prize.

Woo, 91, is known as “the potter’s potter,” both a technical master and a playful innovator, always exploring and expanding traditional forms.

Her vessels and large sculptural wall pieces appear in permanent collections around the globe, from the Detroit Institute of Arts and the Mills College Museum of Art in Oakland, California, to the former Leningrad Mukhina Institute of Art and museums in Greece, China and Latvia, among others. 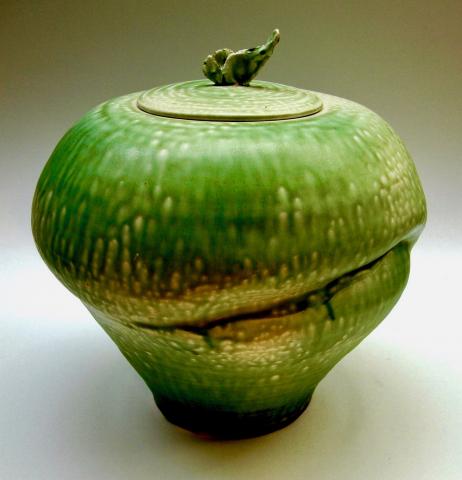 One of Marie Woo's vasers: Challenging notions of form and function.

Woo’s creations are noted by critics for intentionally and jarringly obliterating the line between form and function, often achieved by exposing clay to natural elements such as rain, snow and twigs. Ceramicists strive to replicate “Woo Yellow” and “Woo Blue” – two of the most famous signature glazes that Woo has developed throughout her career.

A 1998 grant from the Rockefeller Foundation paved the way for Woo and two co-curators to travel across China in search of vanishing pottery traditions. Her research led to the International Chinese Folk Pottery Exhibition/Symposium & Films in 2013 at the University of Michigan Museum of Art and a subsequent travelling exhibition, Chinese Folk Pottery: The Art of the Everyday.

Woo is the first Kresge Eminent Artist honored for work in ceramics.

"It’s amazing, really surprising, to think that they would recognize a potter, and an Asian potter, to boot,’’ said Woo, who is Chinese American. The scope of the prize, the professional affirmation and its timing during what she had expected to be the twilight of her career, have left the soft-spoken Woo incredulous. “I’m flabbergasted,’’ she said. “It’s a little overwhelming.’’

Yet, Woo is delighting in the possibility that her selection as the 2020 Kresge Eminent Artist will bring a wider understanding and embrace of pottery as a fully expressive fine art form. Woo said that traditionally pottery and ceramics have been considered crafts. Talking about them as a fine art has been controversial. “I don’t believe in the labeling. I just do what I do and trust the viewer,” said Woo. 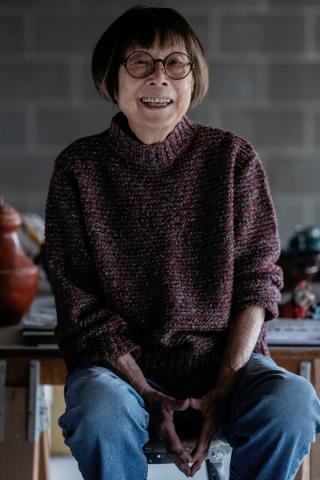 Marie Woo in the basement workspace. She has been working to send what were once 100 pieces of art here to new homes.

In addition to the $50,000 prize, the annual Kresge Eminent Artist Award includes the creation of a short film – which will premiere at a celebration event in April, after which it will be available online – and the creation of a monograph. (The book, to be distributed to the public at no cost and also available for download, can be preordered by sending your name and mailing address to monographs@kresge.org.)

Eleven other trailblazing metro Detroit artists, working in music, literary arts, and visual arts, have received the Kresge Eminent Artist award since 2008, when the honor was established to celebrate a lifetime of achievement in an art form and exceptional creative contributions to the cultural landscape of metro Detroit. 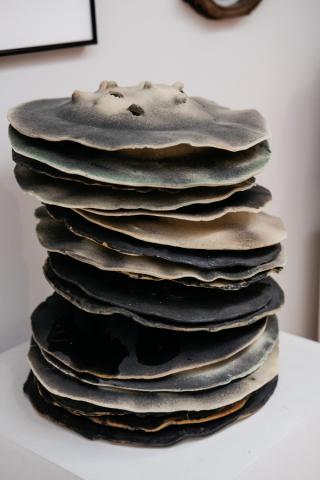 Marie Woo has worked to push boundaries and defy expectations as a ceramicist.

On behalf of The Kresge Foundation, the Kresge Arts in Detroit office at the College for Creative Studies administers the Kresge Eminent Artist Award, as well as the Kresge Artist Fellowship and Gilda Award programs, which provide unrestricted prizes of $25,000 and $5,000, respectively.

Collectively, Kresge Arts in Detroit awards have totaled more than $5.6 million given to more than 220 individual artists, no strings attached, in Wayne, Oakland and Macomb counties since 2008. By making direct investments in artists’ lives, Kresge Arts in Detroit and The Kresge Foundation celebrate the accomplishments of local artists and expand their opportunities, while also uplifting Detroit’s reputation, nationally and internationally, as a thriving and influential center of arts and culture.

“Marie Woo has been a transformational force in the development and elevation of her art form, and in the enrichment of our cultural community – the bases for the Kresge Eminent Artist Award,” said Rip Rapson, the president and CEO of The Kresge Foundation. “On the one hand, she is a prominent student of deep traditions, including Chinese folk pottery, with all of its functional beauty. On the other hand, she is a dynamo within the contemporary practice of ceramics that challenges conventional notions of function and beauty. Her creations reflect a phenomenal level of craft and a fluidity of mind to which we can all aspire.” 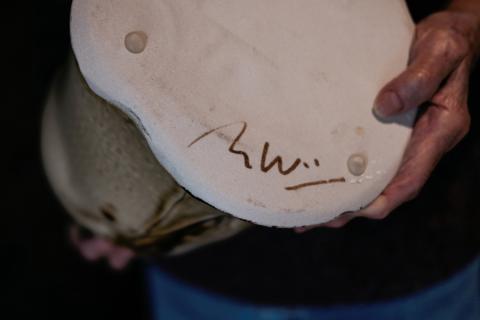 “Marie Woo has made indelible marks as a ceramicist, curator and educator, as well as a key preservationist of rare Chinese folk pottery,'' says College for Creative Studies President Donald L. Tuski. “Through her spirit of experimentation, she has also been a trailblazing innovator, tireless in her approach to testing the limits of clay, even inventing her own signature glazes and clay processes. We're thrilled to celebrate Marie Woo's addition to the esteemed group of Kresge Eminent Artists.”

“Marie Woo is the perfect choice for the 2020 Kresge Eminent Artist Award,” said MaryAnn Wilkinson, executive director of the Scarab Club, one of six panelists who made this year’s award selection. “Her elegant and subtle ceramics question the traditional functional nature of pottery through her own constantly evolving artistic language. Not content to simply work in the studio, she has helped to preserve Asian folk traditions in ceramics that were in danger of dying out. And though not originally from the area, she chose to spend her long, productive career in metro Detroit.” 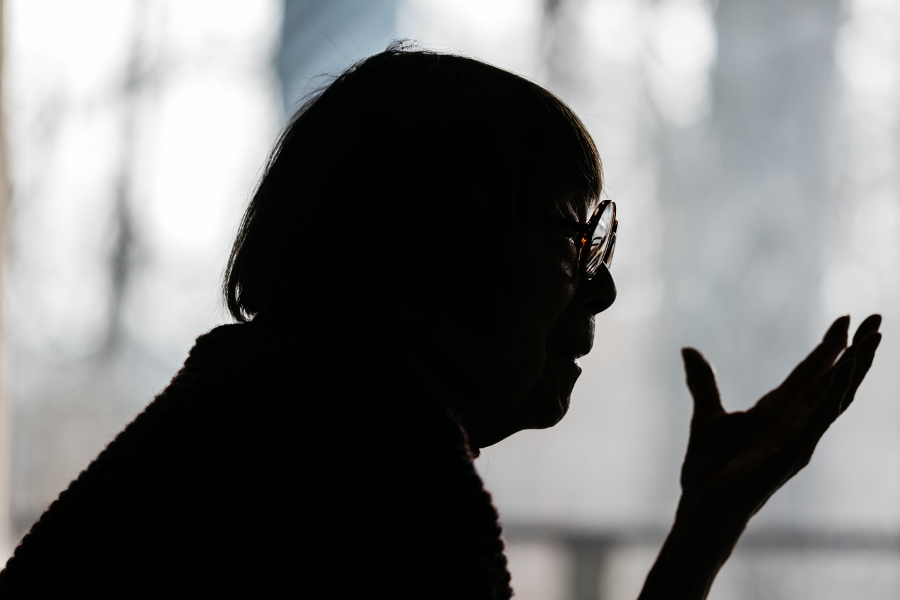 Marie Woo was born April 3, 1928, in Seattle, Washington. Her parents immigrated from the southern part of China and created what Woo recalls as a “pretty routine” childhood, in Seattle’s Chinatown section, for she and an older sister.

Woo’s father was a neighborhood businessman. “I don’t think it was legal,’’ she says, erupting into laughter before continuing. “He ran a series of lottery houses.” Her mother was a housewife.

While Woo’s parents prioritized education – and sent Woo and her sister to a Chinese study school each day following classes at their elementary school – she was left to discover art on her own. “My parents had no interest in art. It was never an important thing.’’

A grade-school teacher was the first person to ignite Woo’s interest in art. That initial spark proved strong enough to lead Woo to major in art at the University of Washington, where she received a bachelor’s in fine art in 1954. Later, at Cranbrook Academy of Art, Woo studied under Maija Grotell, a Finnish American ceramicist who founded Cranbrook’s ceramics program and is regarded as the “Mother of American Ceramics.’’ 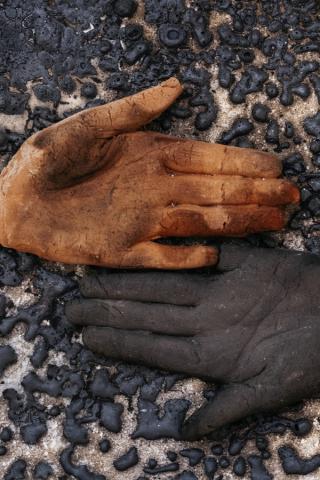 Grotell, Woo says, helped to mold her early methods as a potter and the techniques she’d later use with her own students at the University of Michigan, where Woo taught after receiving her Master of Fine Arts from Cranbrook in 1956. “She was my role my model. She was a fabulous artist, deeply dedicated to her students. I came to Detroit to study with her.’’

Woo developed another great love at Cranbrook: her future husband, an aspiring architect named Harvey Levine. They married in 1959 at the American Embassy in Tokyo.

The pair found themselves in Japan after Woo decided, on a whim, to accept the invitation of a visiting Japanese potter and learn ancient clay techniques firsthand. “People said, ‘You’re crazy to leave. You’ve got a good job.’’’

Woo opted for the thrill of adventure over the promise of job security. For the newlyweds, the decision was the start of several jaunts around Southeast Asia throughout the 1960s. Eventually, parenthood brought the couple back to the United States in 1967, initially to Minneapolis, after the birth of their son, in Bangkok, Thailand. The couple returned to metro Detroit in 1968, when their daughter was born, and Levine accepted a friend’s offer to work on a development in suburban Detroit.

Woo says Detroit has afforded her endless opportunity to break form and to create new creative paths beyond her beginnings as a studio potter.

As the art critic Sarah Rose Sharp noted, Woo has been determined to “push ceramics past function and into experimental realms.’’ Reviewing A Clay Odyssey, a 50-work 2016 retrospective of Woo’s career at The Birmingham Bloomfield Art Center, Sharp wrote: “There is great intentionality in the way that Woo has slashed and broken her forms – even those resembling traditional vessels have scarred-over cuts along their exterior surfaces, strategic tears and gouges, or oddly pinched handles on the lids of pots.”

Throughout the 1970s and 1980s, Woo was a vocal champion for continuing arts education at Pewabic Pottery, a 117-year-old nationally historic ceramic tile studio in Detroit. She taught there, and as a board member pushed back against efforts to eliminate classes as a cost-cutting measure. Woo’s side prevailed, and classes continue to this day.

She also taught for a decade at the College for Creative Studies. 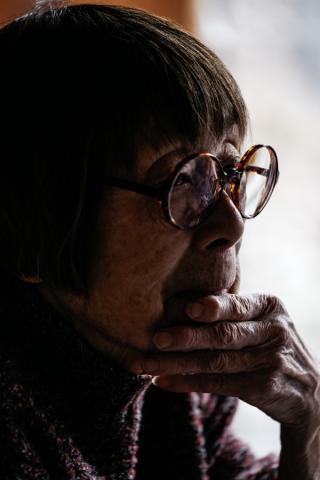 Woo has been a driven collaborator throughout her career. She was a founding member the Clay Ten, an experimental traveling ceramics collective formed in 1983 to showcase the works of 10 potters who at the time were struggling to find outlets for their art.

Prior to her surprise selection as the 2020 Kresge Eminent Artist, Woo said she’d begun the process of looking back on her career rather than adding to it.

The studio in the basement of her West Bloomfield home – designed by Levine – was once filled wall-to-wall with works in progress. It is now largely empty except for a single potter’s wheel and the last of the more than 100 pieces she collected during her 10-year study of Chinese folk pottery. “It’s important that they find good homes,’’ Woo says.

She has made donations to various universities and art schools along with select museums such as the Smithsonian’s Sackler Gallery, which specializes in Asian art. “This was my work every day.”

But then late last fall came an invitation for a solo exhibition at Detroit’s Scarab Club Art Gallery in the fall of 2020. She said, yes. Next was a call from Kresge Arts in Detroit with the news of $50,000 and the largest unsolicited professional recognition Woo has ever received.

Woo was selected to receive the 2020 Kresge Eminent Artist award by an esteemed group of artists and arts professionals: