The Kresge Foundation’s 2014 annual report is available online, along with a companion video from President and CEO Rip Rapson.

The report details the foundation’s grantmaking in 2014, covering 408 awards totaling $242.5 million, with $138.1 million paid out over the course of the year. It also reports on the activities of the foundation’s Social Investment Practice, which made commitments totaling $20.4 million in 2014. 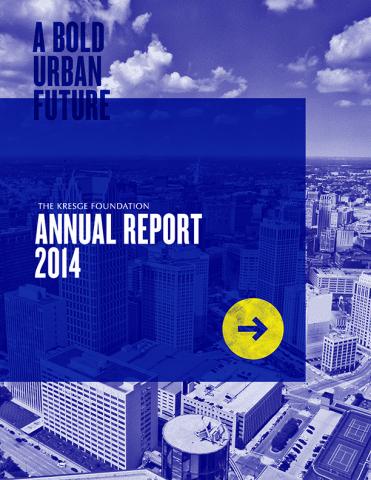 The extraordinary circumstances surrounding Detroit’s municipal bankruptcy pushed the foundation to explore and adopt new ways of working to pursue its mission of expanding opportunity in America’s cities. Traditional boundaries between the public, private and philanthropic sectors are not as clear as in the past, Rapson notes in his Letter From the President. “We all are recalibrating civic roles in an era of federal retrenchment and state and municipal austerity,” he writes.

The annual report distills lessons learned from the bankruptcy into six core beliefs that drive a next-generation approach to Kresge’s work, which aims to create a bold, urban future. “Philanthropy has to be prepared to cut from its safe and secure moorings to embrace a level of risk commensurate with the magnitude of the challenge at hand,” Rapson writes.

“In our context, bold describes our aspirations – which should and do require courage,” writes Chairwoman Elaine Rosen in her letter. “We want people to have the tools they need to lead self-determined lives and to have the opportunity to join the economic mainstream.”

The report also includes booklets that discuss the six core beliefs in detail and summarize how Kresge’s aspirations for bold approaches translate into its grantmaking in arts and culture, education, environment, health, human services and community development efforts in Detroit. Also included are the Financial Report and the Social Investment Practice report.

The 111-page print version of the report will reach several thousand nonprofit, philanthropic, public- and private-sector and academic leaders, as well as Kresge partners. Like other recent reports, a copy will be archived at kresge.org. Both the print and online versions contain a complete list of the awards and investments made and the amounts paid in 2014.

See the online version of the report or download a PDF.

To obtain a printed copy of the report, email communicationsteam@kresge.org