The 2019 National Immigrant Integration Conference (NIIC) — the largest gathering of immigrant and refugee rights advocates and policymakers in the nation that took place in Detroit on October 20-22 — uplifted and addressed the most pressing issues facing immigrant and refugee communities in the U.S.

The overarching themes included civic engagement of immigrant and refugee communities leading into the 2020 election season and the census, how to protect and expand immigrants rights and access to justice and how to best integrate new Americans into the social and economic mainstream of American society in a way that is just and equitable. 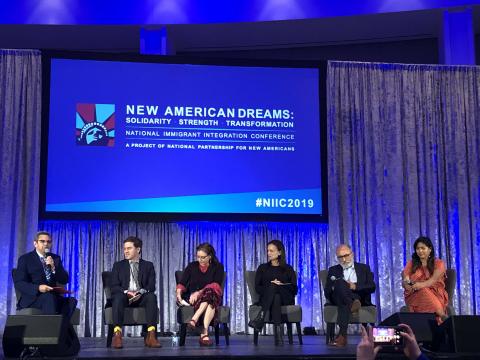 The Kresge Foundation had a large presence at the event both as a sponsor and as speakers.

In her remarks, Chin noted that: “Immigration and residency status is the single greatest determinant of whether you are covered for health insurance. In fact, it determines everything.”  She also argued that the very contentious fight over public charge and eligibility over whom can receive public benefits illustrated how services for immigrants can be “weaponized” against deserving individual and families. To combat this injustice, Chin urged NIIC attendees to help immigrants get out to vote and be counted in the upcoming census in 2020. She also discussed the importance of data to illustrate the gaps in health insurance and health outcomes for immigrants, refugees and communities of color.

In his plenary session, “Winning the Future: From Hate to Hope,” Ari Simon, vice president, chief program and strategy officer, who also oversees Kresge’s Opportunity Fund, shared his family’s immigrant and refugee story and how those experiences drew him to the work of immigrant and refugee rights. “There’s a core principle in Judaism — that’s tied to the migration narrative —  and that is: I am here.” Simon noted that the troubling moment in which we find ourselves required Kresge to step up and step out in new ways as far as the foundation’s grantmaking. He added that: “There’s a deep need to recommit to core dimensions of American civic engagement to prepare for 2020 from the census to voter registration to power building of communities we care about.”

While NIIC is a new partnership for Kresge, this engagement builds on existing work the foundation is undertaking to support immigrant-serving grantees: