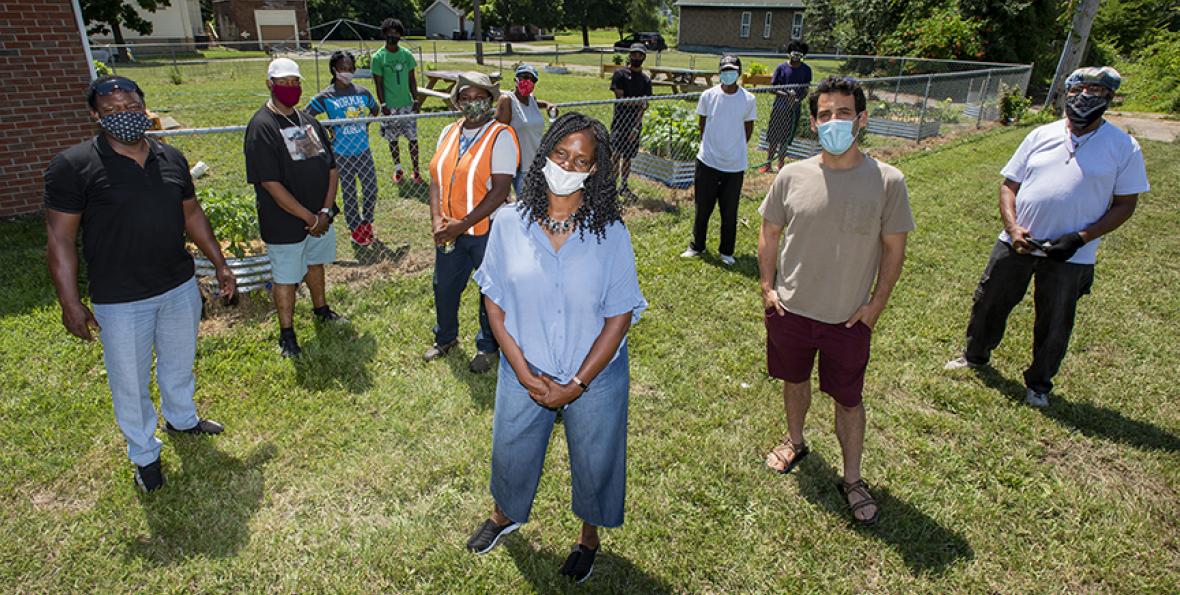 Photo by Lon Horwedel for The Kresge Foundation. 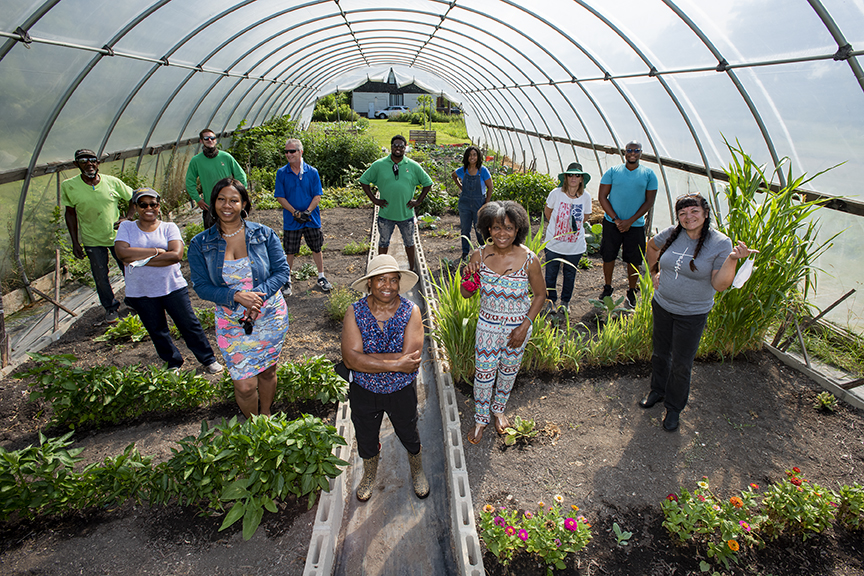 Edith Floyd, President of the Mt. Olivet Neighborhood Watch (center) with other members of the watch group in the neighborhood's community garden greenhouse. The group's planning will include greenhouse expansion. (Participants in these shoots were asked to wear masks to the gathering and maintain social distance, and were invited to remove masks briefly if they felt comfortable.)

Photo by Lon Horwedel for The Kresge Foundation

A cohort of 28 community groups across Detroit will open new green spaces, restore vacant buildings as activity hubs and cooperative housing, commission public art, and plan or implement a range of other activities with new grants totaling nearly $1.9 million from The Kresge Foundation. (Click here for a full list.)

This sixth round of grants under the Kresge Innovative Projects: Detroit initiative brings the total of projects and planning efforts to 127 since 2014 when the Kresge Detroit Program announced the city’s first effort to openly invite proposals from nonprofits for transformative, neighborhood-based projects.

Cumulative grants to Detroit neighborhood projects and planning efforts through Kresge Innovative Projects: Detroit now total nearly $11.1 million. This round of grants includes contributions from Kresge’s Arts & Culture, Human Services and Health programs in support of the Detroit Program which leads the work.

“Detroit may have been battered by the COVID-19 pandemic, but Detroiters are undeterred in their commitment to make their neighborhoods better places to live and work, to find recreation and to express themselves,” said Wendy Lewis Jackson, managing director of Kresge’s Detroit Program. “The well-spring of creativity, energy and Detroit hustle that we tapped into six years ago is still flowing – to the tune of 183 applications this time around. The final decision on just these 28 was difficult.” 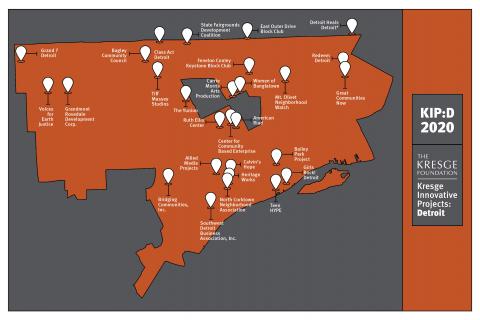 Just as important as the projects and planning efforts is the process of engaging neighborhoods in their creation, Jackson emphasized. These final grant applications were shaped by neighborhood residents and the 28 organizations are committed to keeping residents engaged in subsequent planning and implementation in the next phases of planning and project implementation.

The grants announced today generally range from $150,000 for implementation projects to $20,000 for neighborhood steward organizations such as block clubs and neighborhood associations to engage neighbors in early stage discussions to select projects and begin planning with technical assistance from the nonprofit support organization Michigan Community Resources.

Since 2018, Kresge has committed $500,000 annually to provide KIP:D grantees with technical assistance, and to build them into a network of shared learnings and mutual support. In addition to partnering with MCR for that work, Kresge will partner with Detroit Collaborative Design Center for projects focused on preserving history and culture through arts and culture as well as Wayne Metropolitan Community Action Agency to provide financial management services.

Shamyle Dobbs, MCR’s chief executive officer, sees the latest round of grants in the context of the COVID-19 pandemic. 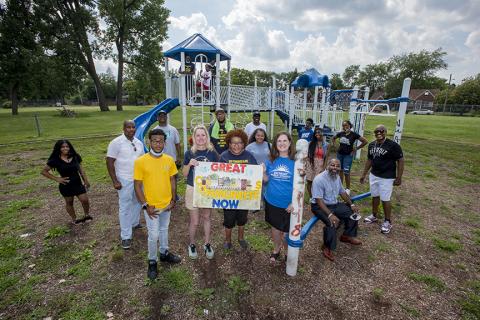 Jacqueline Perkins, center, poses with members of Great Communities Now group, in current play structure of Anthony Wayne School. A new structure will be built thanks to the group's grant through Kresge Innovative Projects: Detroit.

Photo by Lon Horwedel for The Kresge Foundation

“COVID-19 has illuminated to a broader audience what we at Michigan Community Resources already know to be true: that sustained resilience requires sustained resources,” said Dobbs.

For MCR program associate Carolyn Pruitt, the grants announced today are an affirmation that “in nearly every corner of the city, there are people working to improve their communities.”

One of those corners is the Denby neighborhood on Detroit’s eastside where Great Communities Now’s grant supports creating and implementing an improvement plan along the Whittier corridor.

“We can’t hold back our enthusiasm. We have struggled for many years trying to improve this community,” said Greater Communities Now’s Jacqueline Perkins. She noted that last Saturday members spent the entire day raking and bagging trash, cutting grass along Whittier and painting a community mural as part of the annual citywide Neighborhoods Day sponsored by Arise! Detroit.

The KIP:D grant reinforces the group’s energies: “We know these monies will allow us to create a renewed vigor in this area.”

The Bailey Park Project group’s grant includes funds to repurpose vacant lots into an environmentally sustainable green space for residents of all ages in the McDougall-Hunt neighborhood on the city’s near eastside.

“The fact the McDougall-Hunt is not one of the affluent, traditionally organized neighborhoods in the city yet has come together to initiate and execute this project is huge,” said Katrina Watkins.  “It is giving our residents a first-hand view of the work it takes to start a major improvement project and see it through to completion.” 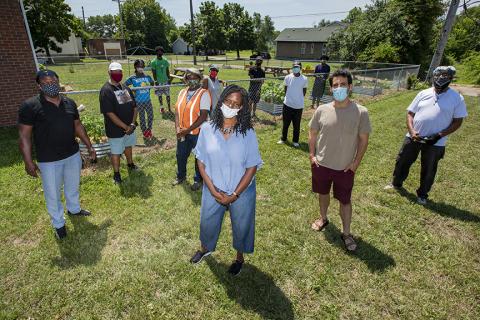 Photo by Lon Horwedel for The Kresge Foundation.

She said that Bailey Park Project began seven years ago and has since led to the creation of the Bailey Park Neighborhood Development Corporation and the McDougall-Hunt Neighborhood Association as more residents are inspired to work for the betterment of the area.

“I wanted better for my community and did not see any other organization or governmental body that had us on the top of the priority list,” Watkins said of the group’s genesis.

“It will take a long time to repair the damage that long-term poverty and infrastructural neglect has wrought on McDougall-Hunt physically and mentally,” she said, “but with partners like Kresge and dedication to the work, it will happen.”

Recently, a coalition of KIP:M grantees and other Memphis organizations have rallied together to provide emergency COVID-19 relief to families living with low incomes in the city.

Led by KIP:M grantee Whole Child Strategies, Inc., and with grant support from Kresge, the coalition is providing cash assistance for food and other household necessities, relief funds for households experiencing loss of income due to the pandemic, and internet access and devices for households without broadband or hardware. The coalition includes fellow Kresge grantees: Center for Transforming Communities, Inc.; Knowledge Quest; and Memphis Medical District Collaborative.

Kresge Community Support: Fresno, the newest grantmaking initiative led by the foundation’s American Cities Program and also inspired by the Kresge Innovative Project initiative, aims to support the growth of the Fresno, California’s community development infrastructure, and in turn, improve the quality of life for residents. In July, grants of up to $35,000 were awarded to eight Fresno organizations, totaling $162,500.