‘Without him, this country might have taken a horrible turn to the right,’ Sinclair says
Detroit

As so many others do, Kresge Eminent Artist Leni Sinclair sees the passing of U.S. Judge Damon Keith as the passing of a gentleman-giant who challenged the status quo in a number of high-profile cases – one of which the photographer-activist saw up close.

That case, in the early ‘70s, revolved around the indictment of her then-husband, John Sinclair, and two of their comrades in the White Panther Party for allegedly bombing a CIA recruitment office in Ann Arbor. (The White Panthers were radical leftist who today would be described as anti-racists; they later became the Rainbow Peoples Party.) 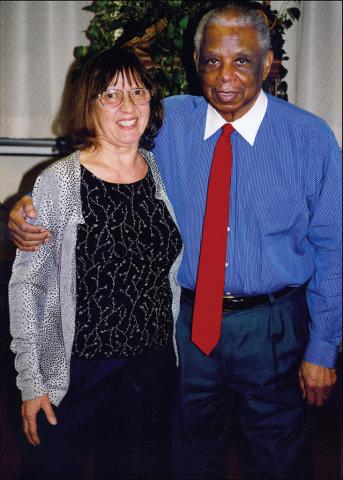 During pretrial hearings, Judge Keith’s order that the Justice Department turn over tapes of warrantless wiretaps of the defendants triggered a complicated legal showdown. The government refused to surrender the tapes and sued the judge; arguments went all the way to the U.S. Supreme Court.

The high court ultimately rendered an 8-0 verdict, and the Justice Department dropped the charges rather than disclose its wiretaps.

But the impact went beyond the three White Panther Party radicals. Similar cases were likewise dropped; moreover, the practice of warrantless wiretapping of radicals was halted.

“If this claim had been upheld, there would have been virtually no limits to the range of government intrusions on the liberty that would have been implicitly authorized once the government invoked the talisman of ‘national security,’” said the American Civil Liberties Union.

And to Leni Sinclair and some others, the decision was instrumental in the chain of events known as Watergate, which ultimately brought down the administration of President Richard Nixon.

The common Watergate narrative begins with a botched break-in to install wiretaps in offices of the Democratic National Committee, three nights before the Supreme Court’s ruling in the Keith case. The counter-narrative that Leni Sinclair and some others embrace is that the burglars were on a mission to remove wiretaps in anticipation of the ruling that would render them illegal.

That’s explained in a recounting of the case by defense attorney Buck Davis in Kresge’s 2016 monograph on the life, art and activism of Leni Sinclair. (Among his memories is one of John and Leni Sinclair, during the Supreme Court hearing, “on two throne-like chairs at the back of the chamber in purple White Panther shirts.”)

She recalls his demeanor in the courtroom: “A gentleman, very fair and calm. Right from the beginning he made it clear to defendants and lawyers we are not a theater. This is not a place where you can have demonstrations and do whatever. We do what the law dictates, and everyone respects each other.”

And she recalls the warmth with which they greeted one another when their paths crossed. Judge Keith even took the podium at an event honoring Sinclair when she received the Eminent Artist Award. He spoke of her photography that “captured iconic images of major cultural, political and social figures and events.” He also spoke of what the Sinclairs had done for the Constitution and America in standing up for the Fourth Amendment – barring unreasonable search and seizure – in the White Panther case.

“Without him, this country might have taken a horrible turn to the right,” Sinclair said the other day in reference to Judge Keith. “If people remember the past, they won’t repeat it.”

“I’m glad we played a small part,” she added. “Bless his heart.”