$300,000 in total will be awarded to 8 cities with biggest increases in FAFSA completion rates
Education

Twenty-two of the largest U.S. cities collectively raised FAFSA completion rates by 4.43 percent in the two-year period ending with the 2016-17 school year, and eight of those cities have won a share of $300,000 through the Kresge FAFSA Completion Challenge.

Through a $1.6 million grant, Kresge’s partner the National College Access Network (NCAN) selected cities to receive up to $55,000 each in 2016 to work collaboratively across their localities to raise FAFSA completion rates by at least 5 percent for the gradu­ating class of 2017. The cities improvements helped to reverse a four-year decline in nationwide FAFSA completions – an impressive feat considering their urban settings, which face unique challenges in successfully reaching all student populations. 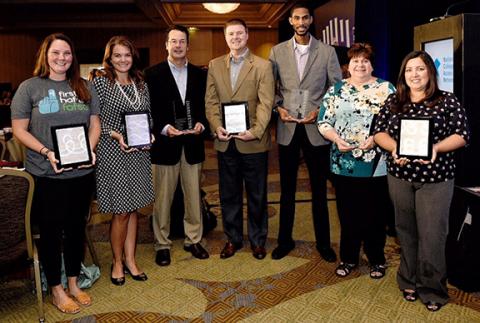 Delegates from seven of the eight cities that are sharing $300,000 through the Kresge FAFSA Completion Challenge. San Juan, Puerto Rico's delegation was not able to attend this week's NCAN conference due to Hurrican Irma.

“The work of each city was truly inspiring,” said Bill Moses, managing director of Kresge’s Education Program. “These cities are working with high numbers of low-income and underrepresented students, who benefit most from completing a FAFSA but who often fall through the cracks and don’t file. We’re thrilled to learn about the innovative practices they used to work across their localities and across sectors to improve their rates.”

Students who file the FAFSA are 63 percent more likely to attend college, yet just 61 percent of the high school class of 2017 applied for federal aid. An NCAN study found that low FAFSA completion does not plague all students equally: In most states, high school seniors in higher-poverty school districts are less likely to complete the FAFSA than students in wealthier districts. That is, for every 10 percentage-point increase in the proportion of children living in poverty, a school district’s FAFSA completion rate declines by about 3 percentage points.

Of the challenge cities, Greensboro, North Carolina, walked away with the biggest prize: $75,000 for achieving the highest percentage of 2017 seniors who submitted the form (64.13 percent) and the second highest percentage-point growth in FAFSA completion (11.86 percentage points). The University of North Carolina at Greensboro led the citywide work there while partnering with Say Yes to Education Guilford, the K-12 system and the state assistance authority.

The University of North Carolina at Greensboro led the citywide work there while partnering with Say Yes to Education Guilford, the K-12 system and the state assistance authority.

Cheyenne, Wyoming, won $50,000 for having the highest percentage-point increase, increasing completion by 12.61 percentage points. Cheyenne, led by Laramie County Community College, only requested $41,463 of the possible $55,000 and finished with a completion rate of 57.76 percent.

Kresge is also awarding $50,000 to Charleston, West Virginia for having the second-highest completion rate with 62.44 percent of the 2017 class filing FAFSA forms. The West Virginia Higher Education Policy Commission led the work in Charleston, which included WiFi-equipped school buses at football games to allow students to file there.

Five other cities will get $25,000 each for excellent results in the challenge:

The full data and more information are available at CollegeAccess.org.

Kresge supported the challenge to help bolster improving FAFSA completion rates in some metro areas and to help cities gain momentum in a year with two major policy changes related to the form. Under the Obama administration, the opening date to file FAFSA moved from Jan. 1 to Oct. 1 for the 2016-17 school year, and the administration also approved the use of prior-prior year tax data, allowing families to more easily access needed financial information to complete the form.

On Monday, Kresge also launched a digital story bank that tells the successful FAFSA stories of 22 students from cities that took part in the challenge. Read them at FAFSAStories.org and on social media with #FAFSAstories.

Editor’s Note: In July 2018, this article was updated to reflect an initial error in the calculation of the FAFSA completion rate for the class of 2017 in the city of Greensboro. Despite this error, the amount of prize money awarded to each winning city would not have been impacted.