The immediate crisis of COVID-19 and the looming climate crisis both call for stronger environmental policies, not weaker
Environment 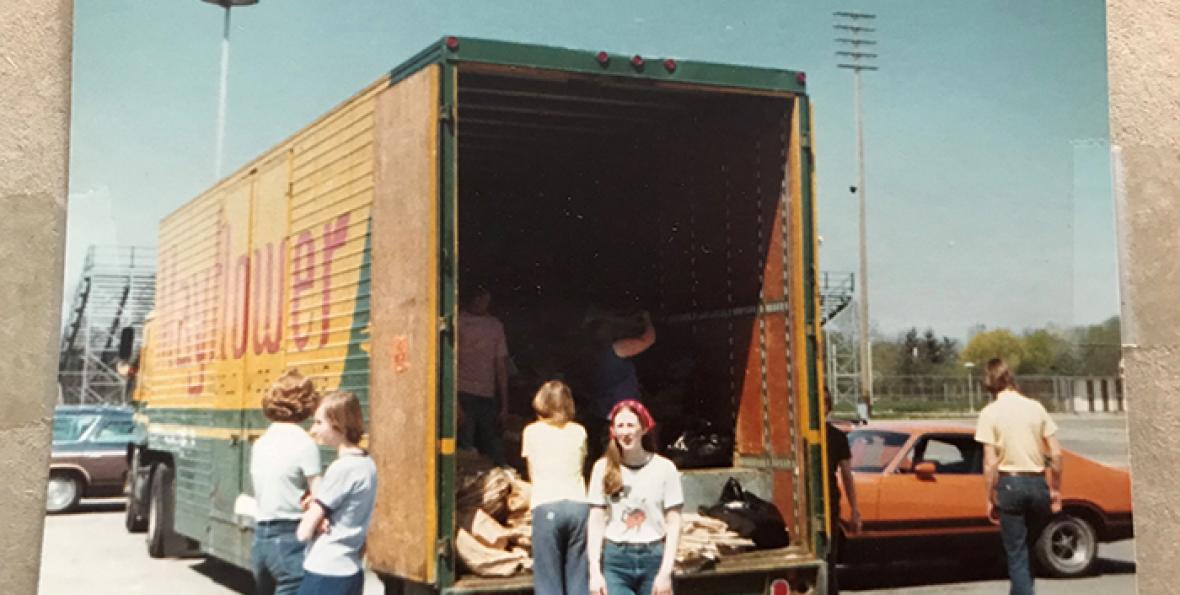 Lois DeBacker, Managing Director of Kresge’s Environment Program, is featured in the center of this photo from 1973 with members of the Groves High School Ecology Club, loading donated newspapers for a recycling drive. 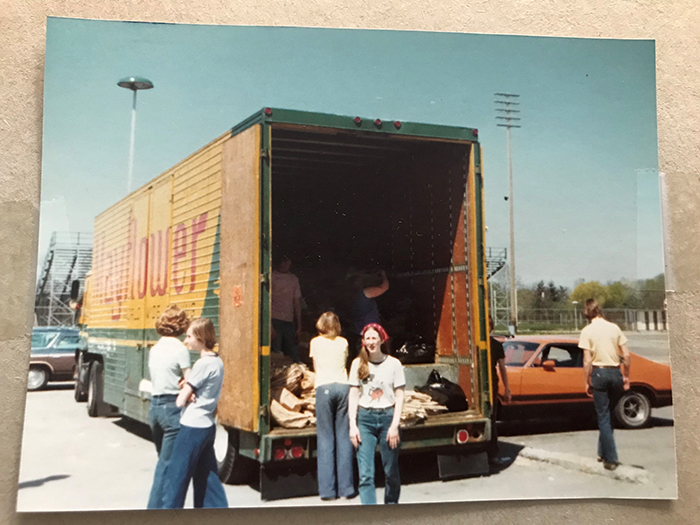 Lois DeBacker, Managing Director of Kresge’s Environment Program, is featured in the center of this photo from 1973 with members of the Groves High School Ecology Club, loading donated newspapers for a recycling drive.

Editor's note: A version of this article was first published by Grist.org.

I don’t recall where I was on April 22, 1970, the first Earth Day.  I was only 12 years old and demonstrations and teach-ins apparently weren’t on my parents’ list of activities for me.

Three years later, however, I was a card-carrying environmentalist and the co-organizer of a daylong environmental teach-in at my high school. My activism began when I joined the school’s Ecology Club. We held monthly paper drives, recycling tons of newspaper and cardboard, and donated the revenues to environmental causes, such as saving one of the last old-growth white pine stands in Michigan. I learned about an array of environmental issues and came to appreciate how critical public policy was to environmental protection. That realization led to my decision to major in political science in college and ultimately pursue a career in environmental policy, followed by environmental philanthropy. 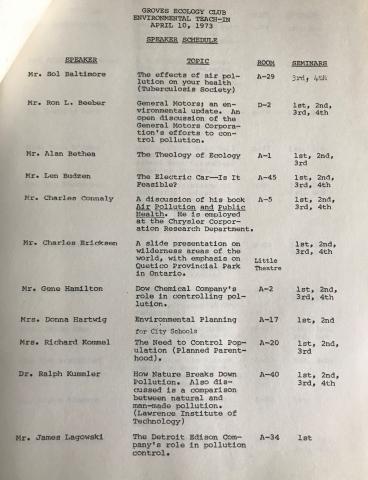 A page from the 1973 Groves Ecology Club Environmental Teach-In Agenda.

During the April 1973 teach-in sponsored by the Ecology Club, regular classes were suspended for the day, and students instead attended their choice of nearly 40 lectures and movies on topics including “The Electric Car – Is it Feasible?,” “The Effects of Air Pollution on Your Health,” “The Energy Crisis,” and “How to Fight City Hall.”

As we recognize the 50th anniversary of Earth Day this week, I’m reflecting on the enormous environmental gains that followed the first Earth Day, the dangerous setbacks we in the U.S. have experienced in the past three years, and the need to demand action on climate change and environmental health.

The first Earth Day was in part a celebration of Mother Earth and all she provides for us. Even more, it was a massive protest – a demand for action to address extreme air and water pollution that was damaging the health of both people and wildlife. The mobilization of millions of Americans elevated the environment as a bipartisan issue for policymakers and led to the adoption of the Clean Water Act, Clean Air Act, and Endangered Species Act and the creation of the U.S. Environmental Protection Agency (EPA).

Those very statutes – and many other important environmental provisions – are under assault by the Trump administration. The New York Times has documented 95 environmental rules that have been or are being rolled back, including rules critical to protecting people’s health and averting catastrophic climate change; and last month the EPA suspended its enforcement of environmental laws indefinitely, using the tragic COVID-19 outbreak as an excuse.

The immediate crisis of COVID-19 and the looming climate crisis both call for stronger environmental policies, not weaker. Just as the COVID-19 crisis has laid bare the race and class inequities in American society, the pollution that causes climate change and the now-apparent negative effects of climate change (e.g., extreme storm events, heat waves, and wildfires) hurt first and worst people with low incomes and communities of color. We are seeing worse coronavirus mortality rates in communities that historically have been subjected to higher levels of pollution and whose residents’ immune systems and lung function have been compromised as a result. 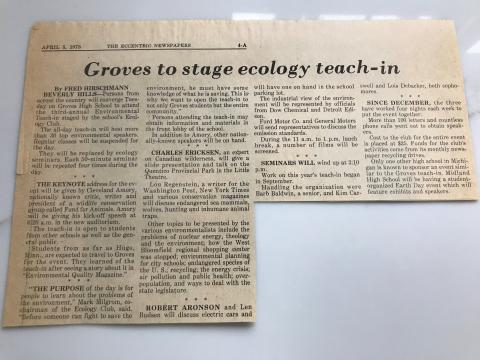 I’m struck by how relevant the topics addressed in the April 1973 teach-in that I organized remain today. It turns out that electric cars are feasible. The health effects of pollution are still all too serious, especially for people of color who suffer disproportionate exposure due to systemic racism. The need to transition quickly away from fossil fuels is our current energy crisis. And City Hall remains a critical focal point for climate action, particularly in the absence of federal leadership.

The Kresge Foundation’s Environment Program aims to help cities combat and adapt to climate change while advancing racial and economic equity. We advocate that cities address climate change mitigation and adaptation concurrently. Among our top priorities is elevating the leadership, inclusion, and influence of people of color, people with low incomes, and equity-focused organizations in climate change-related decision-making at the local, state, and federal levels.

My fervent hope is that Earth Day 2020 shines a bright light on the urgent need to act on climate change and environmental health. May demands brought by an increasingly diverse and broad-based set of leaders, including those we are proud to call Kresge grantee partners, force change for the better.