Detroit Future City today released “The 2019 Detroit Reinvestment Index,” the results of an annual survey measuring what national business leaders think about Detroit. This fourth edition of the report reveals perceptions of Detroit are positive and continue to improve. For the first time in 2019, the survey also measured perceptions of the city among suburban residents.

In 2016, Kresge led the creation of the first Detroit Reinvestment Index to better understand business leaders’ perceptions about the city’s revitalization and its investment potential. The 2017 index was expanded to include perceptions of the city among local entrepreneurs. Then in 2018, the index expanded yet again to measure the views of metro-area Consumers about commercial corridors and retail in Detroit, as well as these investments’ role in community revitalization and development. 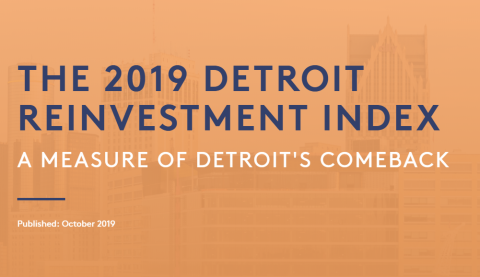 The favorable opinions revealed in the “The 2019 Detroit Reinvestment Index” not only indicate a positive momentum in national business leaders’ interest in investing in Detroit, but also suggests a narrative shift in metro Detroit residents’ opinions in which there is a collective positive view of the city.

“Our research in the past few years has revealed some common threads,” said Anika Goss, Detroit Future City’s executive director. “Detroit is most definitely experiencing a revitalization, which is improving perceptions of and interest in the city. This provides remarkable opportunities, yet it also has the potential to present inequities. We need to harness the growth and positive perceptions of Detroit to catalyze further investment, but also be cognizant of how this will impact Detroit’s most vulnerable residents.”

Support for the Detroit Reinvestment Index and Detroit Future City is provided by the Kresge Foundation’s American Cities and Detroit Programs.