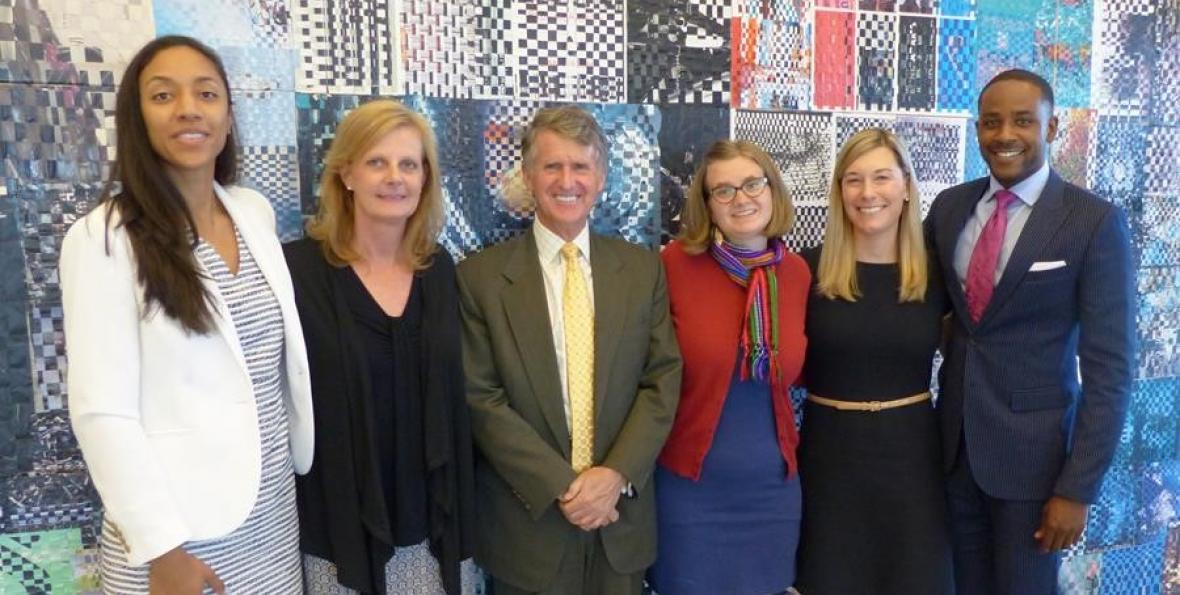 Over a 10-week period, the “class of 2016” contributed directly to the work of the foundation’s executive office, Education and Environment programs, American Cities Practice, Facilities and Investments departments. They also volunteered for community activities, participated in networking programs and managed to squeeze in some socializing at Detroit Tigers games and other events.

A recap of the interns’ work and their future plans follow:

LesLeigh attends Duke University and is pursuing a Ph.D. in sociology. Her internship assignments including advancing work to improve the foundation’s responsiveness to grantees and applicants, gain a sense of the workings of a national foundation, and support the executive office.

She researched and developed recommendations for email- and time-management training; created onboarding resources for new program staff; and reviewed Kresge’s digital communications with grantees to ensure they aligned with recommendations made recently by the foundation to further bolster grantee communication.

LesLeigh helped review proposed urban-neighborhood revitalization strategies from organizations in 13 cities and coordinated a visit to Detroit by philanthropic, business and nonprofit leaders from West Virginia. Both projects were an extension of Kresge’s Drawing on Detroit convening hosted in May by the American Cities Practice and the University of Southern California. She also provided speechwriting and presentation support to the executive.

LesLeigh will return to Durham, N.C. in August, to complete the third year of her doctoral program at Duke.

Fresh off of a study trip to China, Terrance is a third-year Ph.D. student at Michigan State University studying higher, adult and lifelong education.

He organized the FAFSA Completion Challenge reception as part of the NCAN conference, conducted a comprehensive analysis of the Education team’s entire grant portfolio and developed an interactive index of current education team grants. He also developed presentations and talking points for Education team internal and external gatherings, and participated in meetings with Kresge grantees.

Mary attends the University of Michigan School of Natural Resources and Environment and is pursuing a master’s degree in natural resources and environmental justice.

During her internship, she worked on three primary projects in support of the Kresge Environment team’s development of a water resources management strategy.

With Senior Program Officer Jalonne White-Newsome, Mary worked to synthesize six months of information gathered from conversations, literature, conferences and webinars to inform development of the water resources strategy. She also conducted interviews with peer grant-making institutions that focus on water issues to better understand their strategies and identify where Kresge can best target its resources.

Mary compiled a review of literature about how social cohesion related to climate resilience is being used in in academic, government and non-governmental publications. She also reviewed past grants and conducted interviews with foundation staff and practitioners in the field to identify opportunities for future cross-team grant-making with the Environment and Health teams.

Alexandra attends Harvard University and is pursuing a master’s degrees in public policy and business administration.

She worked on the practice’s strategies for climate change and public policy, exploring the potential for a cross-sector, action-oriented conversation on climate change in New Orleans. She conducted research to set the context of such a conversation, spoke with stakeholders, and developed objectives for Kresge that align with its internal program goals.

Alexandra explored how Kresge can better mobilize state policy in support of opportunity in cities. She researched state policies that affect cities and the mechanisms that influence those policies, conducted interviews with outside stakeholders and produced an internal white paper of her findings. She also assisted with reviewing proposals and making grant recommendations.

During her internship, she inventoried more than 350 books, publications and digital materials purchased, published or supported by the foundation and then developed a cataloging system and shelving sequence based on Library of Congress call number standards to identify the digital and physical assets.

Her work included collaboration with information specialists at Walsh College, the Rockefeller Archives and other organizations to establish best practices. Margaret initiated a web-based database with a catalog/circulation feature that will allow Kresge staff to more effectively searching the collection and check out materials on a self-managed basis.

Margaret also produced a policy and procedures manual, and an account administrator’s guide, so that the foundation can add to and maintain a robust and organized library.

A recent graduate of University of Texas at Austin, Jordan initiated three major projects where the Investments team required additional support. Several weeks into her internship, Jordan was offered a full-time position aligned with her long-term career aspirations, so her internship was cut short.

The first of her three projects involved researching and analyzing the fees charged by the investment managers in the Kresge portfolio, to help the foundation's Investments team understand the drivers of total portfolio costs, which has grown more difficult due to the increasing complexity of the niche investment opportunities that Kresge has undertaken. A second project involved updating, clarifying and verifying the individual manager and benchmark summaries that the team provides each quarter to the Investment Committee. Jordan also started a project to research and source potential investments in the affordable housing sector – a commitment the investment team shares with a cross-functional workgroup at Kresge.

In its second formal program year, Kresge’s summer intern program has hosted a total of 11 interns who are pursuing careers in program philanthropy and related fields. Recruiting for the 2017 class of interns will begin this fall.