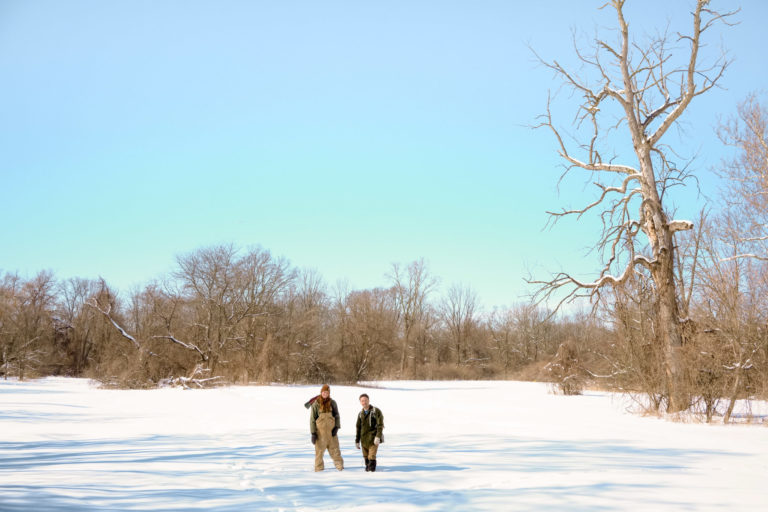 Detroit’s only campground, Scout Hollow in Rouge Park, will reopen this spring to create overnight group-camping opportunities for city youth. It has been closed for more than a decade.

The reopening is supported by The Kresge Foundation. Camping will be coordinated by Detroit Outdoors, a collaboration between the city of Detroit’s Parks and Recreation Department, Sierra Club and YMCA of Metropolitan Detroit.

The 17.4-acre site is on a secluded bend of the Rouge River in the park of the same name. Since its closing, Scout Hollow has been reclaimed by tall grass, deer and wild turkeys.

Kresge’s $200,000 grant will allow Detroit Outdoors to renovate the area with designated campsites to accommodate large groups. The grant will also stock a “library” of camping gear – from sleeping bags to tents – that groups can borrow from for their camping adventures. Detroit Outdoors will conduct camping leadership training for educators and youth development professionals as a requirement for use of the facility.

“This reopens a long unavailable asset to connect city youth with nature. To really learn about nature, you must immerse yourself in it. There is simply no substitute,” says Interim Detroit Parks and Recreation Director Keith Flournoy.

At roughly 1,200 acres, Rouge Park is the city’s largest. It is larger than Belle Isle (982 acres), the island park in the Detroit River, and New York’s Central Park (843 acres). 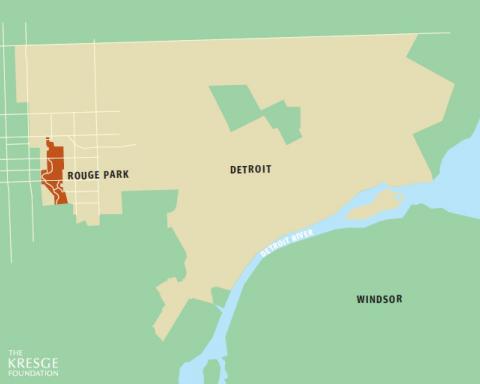 Scout Hollow is situated the east side of 1,200-acre Rouge Park.

Scout Hollow covers more than 17.4 acres of mostly forest with a five-acre meadow at its heart; three camping sites at Scout Hollow will accommodate up to 30 campers each. Organizers expect to see 250 campers in the first year. They expect to serve 1,000 campers annually within three years.

While open to all youth-serving organizations, the Scout Hollow campground will be primarily focused on supporting groups from Detroit and surrounding communities.

“We have a tremendous natural asset in Rouge Park and Scout Hollow,” says Flournoy. “Collaborating with community partners like the Sierra Club and the YMCA of Metropolitan Detroit with Kresge’s support allows us to leverage that asset and bring their expertise and resources into service for the youth of our city.”

“Providing access to safe recreational opportunities in our parks and green spaces is a key component to revitalizing and reimagining neighborhood life in Detroit. Connecting to nature anchors our souls at any age, but this is particularly important in the formative years of youth,” says Wendy L. Jackson, managing director of Kresge’s Detroit Program, which is funding the Scout Hollow renovations. “We’re both proud and excited to support Detroit Outdoors in this endeavor.”

Sierra Club, a national environmental organization based in Oakland, California, is supporting Detroit Outdoors with a $20,000 grant. For the Sierra Club, which has been working with Friends of Rouge Park for several years, Scout Hollow is a way for communities to connect with nature in an urban environment.

This birdhouse in Scout Hollow will be hidden by leaves come spring. A wide variety of birds can be found in the area, including raptors, Great Blue Herons and Eastern Meadowlarks.

“Rouge Park neighbors – and others across Detroit and surrounding suburbs – have an important relationship with this park that we are working to strengthen,” says Jackie Ostfeld, associate director of the Sierra Club Outdoors Campaign. “This will introduce camping under the stars to young Detroiters who might not otherwise have that opportunity.”

The YMCA of Metropolitan Detroit, which has operated overnight camps in Holly and Oscoda for decades, will lead a series of camping leadership trainings at Scout Hollow this spring and summer.

“We know firsthand that camping not only offers outdoor adventures but also teaches us to slow down. Camping helps us appreciate and respect our environment, and it provides the opportunity to learn new skills,” says Scott Landry, metro YMCA president and CEO. “Scout Hollow will connect kids in Detroit with the out of doors that exists within their city.”

Partners in the reopening of Scout Hollow believe it could see a thousand campers annually in the near future. They will be close to Rouge Park’s wildlife, which includes deer, muskrats and coyotes.

Organizations that send a leader through the YMCA training will be able to reserve campsites and use the gear library.

“The only things boys and girls will need to bring will be their personal clothes and a curiosity for the great outdoors,” says Landry.

“I’ve been lucky enough to lead a Sierra Club trip with teens from Northwest Detroit to Yosemite Valley, and I’ve taken young people from Highland Park on trips to Rouge Park. You can’t mistake the look of joy on the face of someone who’s walking on a dirt trail in the outdoors for the first time,” said Dempsey. “You can’t experience that and not be moved by it.”