Editor’s Note: Leaders from several national and local foundations, including Kresge, will gather in New Orleans on Friday, Aug. 28, at a convening that will offer funders a moment to assess what has worked and plan for the next generation of giving in New Orleans. A livestream of the President’s Panel, featuring Kresge President and CEO Rip Rapson and leaders from the Ford Foundation, W.K. Kellogg Foundation, JP Morgan Chase and others, will be available on www.nfg.org/gnofn at 10:15 a.m. EDT.

As all Americans reflect this week on the 10-year anniversary of Hurricane Katrina, we at The Kresge Foundation have also paused to remember the nearly 1,000 lives lost, the thousands and thousands of families uprooted and the many neighborhoods destroyed in New Orleans. The anniversary has also provided a moment to reflect on the ensuing philanthropy in the city, to acknowledge that the work and recovery is far from complete and to inform how we continue to engage in the region in the decades to come. 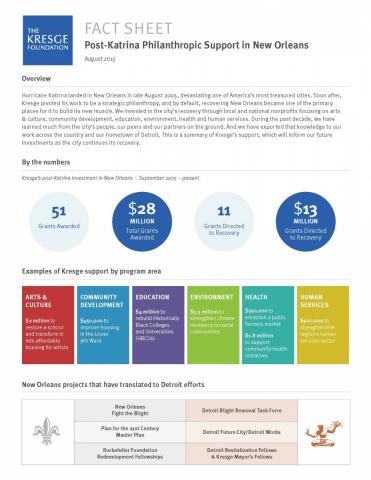 A fact sheet about Kresge grants in New Orleans is available for download from our Library.

After the initial disaster-recovery support, foundations across the country bolstered funding to revitalize the city through local, regional and national partners on the ground. Since 2005, our foundation has granted $28 million to nonprofits working to improve opportunities in post-Katrina New Orleans. Those grants have supported the city’s physical recovery as well as new, innovative efforts to build climate resiliency, to support artists, to build new housing and to sustain the city’s educational institutions.

What we’ve learned from this work with partners and peers in New Orleans is that working in a city recalibrating from a major catastrophe requires both innovative, discrete activities aimed at a particular problem and coordinated approaches that draw together these disparate actions. It’s a lesson that has directly influenced the way Kresge has worked elsewhere, including our hometown of Detroit, where we have migrated and customized to our circumstance efforts conceived and launched in New Orleans.

One example is in building civic capacity, where we borrowed the framework of the Rockefeller Foundation Redevelopment Fellowships program to create the Detroit Revitalization Fellows and Kresge’s Mayor Fellows program. A second example is reimagining land use, where the resident-engagement process embedded in the New Orleans 21st Century Master Plan directly and powerfully shaped the process we used to create the Detroit Future City plan. A third example is in remediating blight work, where the New Orleans’ Fight the Blight initiative paved the way for the Detroit Blight Removal Task Force.

We have also learned that it is implausible to work in a place like New Orleans without centering climate change explicitly in all conversations. As Kresge’s six program teams continue to invest in New Orleans, they will individually and collectively evaluate the question of how their investments contribute to the ability of the city to mitigate the future adverse impacts of climate change and adapt to its inevitable consequences.

We anticipate that Kresge will focus its future funding on three specific areas: urban water management; engaging the health and human services sectors on the implications of climate change; and land use, including infrastructure, vacant properties and blight. These efforts will fit hand-in-glove with the increasingly deep engagement happening across all sectors of New Orleans society. We believe strongly that the path New Orleans travels will have enormous impact for other cities across America.