In addition to the start of work on the new park, the day’s activities also included:

“Kresge’s commitments alone across the broad Livernois-McNichols area will exceed $20 million over the next several years,” said Rapson. “That ranges from support for Live6 and the new HomeBase to neighborhood arts projects to support for housing and Ella Fitzgerald Park and greenway development. And we are only one of a number of funders and groups coming together here.”

The Ella Fitzgerald Park groundbreaking is the first major construction of the two-year Fitzgerald Revitalization Project, which the city is leading that will see some 115 vacant homes rehabbed for rental or sale, 16 demolished and nearly 200 vacant lots turned into greenways, gardens, flowering meadows or other community assets. The Platform and Century Partners were announced earlier this year as developers for the residential development for the quarter-square-mile within the Livernois-McNichols area that is home to 600 families.

Ella Fitzgerald Park construction, funded separately through public and philanthropic investment, will be followed by home renovations and landscaping later this year. Funding for the park – located between Prairie and San Juan Streets within the Fitzgerald neighborhood – is being provided through the Reimagining the Civic Commons Initiative supported by The JPB Foundation, the John S. and James L. Knight Foundation, The Kresge Foundation and The Rockefeller Foundation.

Mayor Duggan said the park is symbolic of the city’s trajectory.

“The start of this project is a major milestone in our efforts to revitalize many of our neighborhoods that have experienced a loss in population,” said Duggan. “By working closely with the community and partners like Kresge, we are turning the vacant land, once seen as a liability, into an asset.”

The new city park will have a multipurpose sports field and basketball court, as well as play equipment and plenty of greenspace. Most importantly, it will be an attractive gathering place for the surrounding community.

“As a representative of Prairie Street and of the community,” says Banks, “we are waiting on tip- toe with anticipation. We’re excited about the groundbreaking and completion of the Ella Fitzgerald Park and long-awaited ventures.”

Banks, whose family moved to the neighborhood in 1966 when she was just shy of 3 years old, recalled the days of neighborhood picnics, parades and other special events, and shopping along McNichols. She said she was proud to be part of the “illustrious revitalization of such a beautiful and deserving community.”

“The revival of a city may begin downtown, or in a central corridor, but revival just has to become concrete across neighborhoods like this one,” said Kresge’s Rapson. “We’re learning how to make that possible with new collaborative efforts that pool ideas and resources – not the least of which are the ideas of neighbors who’ve often invested years of their lives and put down roots here.”

“These activities that we’re calling attention to here are all important in themselves,” added Rapson, “but the real message is their mutually reinforcing nature. Time and again we’re finding that this way of working can give us the traction we need to move forward.”

HomeBase is to open next year.

The Detroit Collaborative Design Center, a nonprofit architecture and urban design firm at the University of Detroit Mercy School of Architecture, will be another key tenant. The center is dedicated to creating sustainable spaces and communities through quality design and the collaborative process.

Live6 was founded two years ago with support from Kresge, University of Detroit Mercy and the Detroit Economic Growth Corp. to facilitate new efforts and complement initiatives along the McNichols and Livernois commercial corridors. Live6 seeks to build on the community’s assets and engage its higher education anchor institutions – the University of Detroit Mercy and Marygrove College.

Since then, Live6 has continued to support and enhance revitalization along Livernois. Artists across a range of disciplines are being recruited for art commissions for public spaces. An alternate Saturday Farmer’s Market has begun on Livernois across from University of Detroit Mercy. The organization has facilitated outreach by Motor City Match for businesses seeking planning, architectural support and other technical assistance. The Detroit Sip coffee house, where Tuesday’s event concludes, is one example of a new business life being aided by Live6.

“You can’t underestimate what the establishment of HomeBase will do to accelerate the collaboration between the various organizations who are working toward revitalizing this area,” said Lauren Hood, Live6 Alliance co-director.  “And a well-trafficked office can only help spur more development in the immediate vicinity. This means there’ll be one less abandoned building on this street. We’ll be a good neighbor to the about-to-open coffee shop next door, the restaurant in the works across the street and the other active buildings in the vicinity. Activity attracts more activity for everyone.”

“The establishment of HomeBase also creates a single place where residents can go with questions – whether they’re trying to get an affordable mortgage or trying to open a business, the resources to help can be found, at last, in a single space,” said Hood. “And it will be open for block club meetings and a wide variety of other community events.” 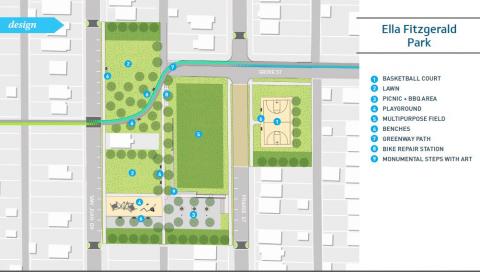 Ella Fitzgerald Park will include a basketball court, playground, picnic area and a leg of the new greenway connecting the neighborhood.

Supported by The JPB Foundation, the John S. and James L. Knight Foundation, The Kresge Foundation and The Rockefeller Foundation, Reimagining the Civic Commons is a $40 million national initiative to foster civic engagement, economic opportunity and environmental sustainability in Akron, Chicago, Philadelphia, Detroit and Memphis. Reimagining the Civic Commons is a national initiative that seeks to counter economic and social fragmentation in our cities by revitalizing and connecting public places such as parks, plazas, trails and libraries to bring together people from different backgrounds.

“Reimagining the Civic Commons intends to be the first comprehensive demonstration of how a connected set of civic assets – a civic commons – can connect people of all backgrounds and yield increased and more equitably shared prosperity for cities and neighborhoods,” said Coletta senior fellow of Kresge’s American Cities Practice who’s also helping lead this philanthropic work.

In Detroit, Reimagining the Civic Common’s work focuses on supporting the creation of Ella Fitzgerald Park and a greenway connection among Marygrove College, the University of Detroit Mercy and the community, the revitalization of the Livernois cultural corridor and the development of a varied set of community programming and activities. The national funding is matched at the local level from project partners, including the City of Detroit, Invest Detroit, the Greening of Detroit, Detroit Collaborative Design Center and the Live6 Alliance.

As part of the, celebrated Detroit artist Hubert Massey unveiled renderings of two forthcoming 80-foot murals that will be created for park. “Hands of Happiness” has hands painted in vibrant colors to reflect the Fitzgerald’s culture and resilient people. In “Celebrating Resilience and Song,” houses and trees symbolize the neighborhood’s long, rich history in the city.

Massey led a number of visioning sessions with neighborhood residents to guide the design of the murals and articulate their story of their own community. Neighbors will also take part in the creation of the tiles for the murals.

The murals will greet park visitors with “a burst of color,” said Massey.  “This should be really wonderful.”