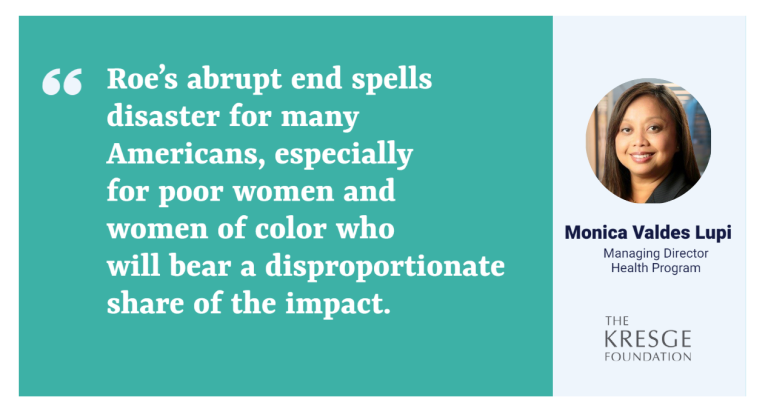 My initial reaction to today’s court decision in Dobbs vs. Jackson Women’s Health Organization is intensely personal because health equity and expanding accessible high-quality health care to more Americans is my life’s work and passion.

As a member of Generation X, I directly benefitted from the landmark Roe v. Wade decision in 1973, and I appreciated the privilege of living and working in states where I had full autonomy over decisions involving my reproductive health care. Today, for so many women across the country, that right no longer exists, replaced by an inequitable patchwork of access to abortion care in this country.

Today’s U.S. Supreme Court decision will have grave and tremendous consequences immediately and for future generations of American women. It’s my 15-year-old daughter’s face and those of her friends that serve as daily reminders of why we need to continue to fight the battles that lie ahead of us. Where she decides to go to college or work or live should not determine her access to care or dictate her ability to control if and when she decides to have children.

For those women who have the financial resources, the post-Roe world makes it difficult, but not impossible to travel to states that support abortion rights to safely terminate their pregnancies. Women of means will likely be able to find a provider and take care of transportation and lodging.

Women of color, women with less wealth and women whose primary language isn’t English, though, will face incredible challenges in navigating this confusing maze. Reducing or eliminating access to abortion care further will only worsen health inequities in myriad ways. Perhaps one of the most significant examples involves birth outcomes for Black women, whose pregnancy-related mortality ratio (PRMR) is 2.5 times higher than white women. Such health inequity persists across education levels. The PRMR for Black women with a higher education or graduate degree was 1.6 times that of white people with less than a high school diploma. In addition to increased risk of death, Black women face higher incidence of pregnancy-related morbidities, such as hemorrhage, infection, heart attack, and kidney failure. As a result, lack of access to abortion care may not only result in acute long- and short-term health conditions, it could be a death sentence.

Using a reproductive justice approach will be necessary to ensure that the issues around reproductive rights and access to care are grounded in the belief and values that women have the right to maintain their personal bodily autonomy, have children, not have children, and parent children in safe and sustainable communities. The Supreme Court’s decision is detrimental to women’s health and extends far beyond abortion care and services. The stark reality is that these devastating impacts will be unfairly borne by women of color who already experience barriers in accessing contraception, comprehensive sex education, STI prevention and care, and prenatal and pregnancy care.

Policymakers, public health officials, medical professionals, advocates, and scholars will explore creative methods of protecting access to abortion care in the shadow of the Dobbs decision. Our partners at the Network for Public Health Law shared that while in some states, the highest court has found a right to abortion in the state constitution, no state has adopted an explicit protection. And as recent case law shows, a state court decision—just like the long-standing U.S. Supreme Court decision Roe v. Wade —can change profoundly and quickly.

For example, in June 2022, the Iowa Supreme Court reversed its opinion from just four years prior that had found that the Iowa Constitution protected abortion as a fundamental right. While there will have to be other, less thorough options available in some states for political reasons, the most complete and near permanent way to secure access to abortion as a fundamental right is through an explicit amendment to state constitutions. Vermont has already placed a constitutional amendment addressing reproductive liberty on the ballot for voter consideration in November 2022. But clearly, the best protection would come by way of such an amendment to the federal constitution.

Advocates for public health were already exploring different ways to ameliorate the impacts of a Roe reversal. Since there will be a tiered environment depending on each state’s laws, diverse tools and approaches are all on the table. Everything from expanding access to medication abortions, shoring up telehealth and telemedicine platforms, and streamlining interstate licensure to strengthen workforce capacity.

It is already clear that Roe’s abrupt end spells disaster for many Americans, especially for poor women and women of color who will bear a disproportionate share of the impact. There is already a vast health equity gap in this country, and we fully expect this divide to deepen and widen, particularly in the southern portion of the United States and in blue cities located in red states where highly restrictive abortion access is now lawful.

Given these grim, new realities, those of us who have long worked on expanding health equity and fortifying public health systems in this country must not be dissuaded from our mission. Now, more than ever, we must fight on to ensure that all women have the comprehensive quality health care to which they are entitled.