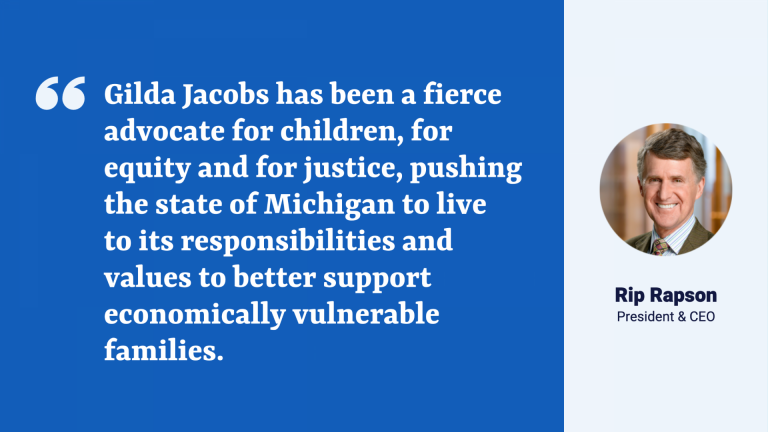 Gilda Z. Jacobs’ tenure as the head of the Michigan League for Public Policy has been so influential  that it is tempting to think that she has been, and will be, there forever. But she hasn’t been, and she announced this week she won’t be. She is stepping down after a decade of service – a decade that builds on a thirty-year career as state senator, state representative, Oakland County commissioner, Huntington Woods city commissioner, and Huntington Woods mayor pro tem. It is one of the most remarkable careers in public service our state has seen. It is a moment to take stock of, and celebrate, the extraordinary contributions she has made.

In many of those roles, she broke barriers for women. In the Michigan House, she made history as the first woman to lead either legislative chamber. Even at the outset of her career in the 1980s, she was the first woman elected to her posts in Huntington Woods. Just as important, she was well known for encouraging and mentoring other women to walk through the doors she first opened.

Throughout, she has been a fierce advocate for children, for equity, and for justice, pushing the state of Michigan to live to its responsibilities and values to better support economically vulnerable families. She expanded the capacity of the Michigan League for Public Policy to pursue those ends by identifying gaps in state services and advocating meaningful policy changes to address those gaps. Her major accomplishments with the league include:

As our political and social environment has become not simply partisan, but hyper-partisan, the bedrock analysis that Gilda’s league has provided — and we trust will continue to provide in honoring her legacy —has become ever more important. We can only hope that in the not too distant future it will be more widely valued across the political spectrum as it has been in the past.

Gilda has said the in her next chapter she will make her contributions as a grandparent, as a volunteer, and as an advocate. We wish her well — and count on continuing to hear from her and benefit from her wisdom.