Statement from Kresge President and CEO Rip Rapson on the passing of Naomi Long Madgett, the 2012 Kresge Eminent Artist 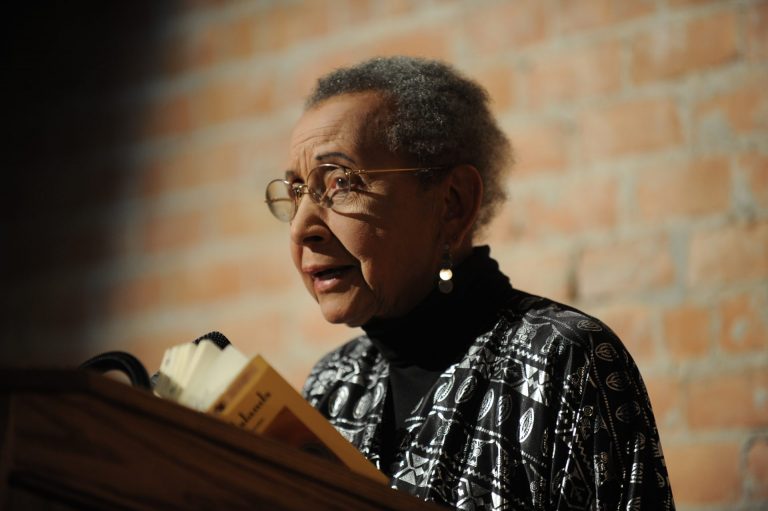 Naomi Long Madgett, Kresge's 2012 Eminent Artist, reads from her poetry at an event that year in her honor.

A dynamic force in the cultural life of Detroit, Kresge Eminent Artist Naomi Long Madgett was not only a brilliant and accomplished poet, but also an educator, mentor, editor, publisher and Detroit Poet Laureate (appointed by then-Mayor Dennis Archer in 2001). She embodied strength, conviction and energy in everything she did.

In the mid-20th century she helped establish a voice for African Americans, in a literary world where they weren’t heard often enough, with the establishment at Lotus Press in Detroit. Lotus Press allowed other African American poets to publish and distribute their work, even though, as Naomi put it, she “never intended to be a publisher.” She also taught the first black literature course in the Detroit public school system.

Insight, depth of emotion and indomitable beauty defined her art and her constitution. Her influence and her determination allowed other poets to find their voices and her leadership allowed other artists to thrive.

Earlier this year, in the first wave of the COVID pandemic and in the wake of  George Floyd’s killing, Naomi was one of the poets I turned to find voice for my outrage and sadness – to perhaps replenish my dwindling reservoir of hope.

Her poem “Midway” was written 50 years ago – it resonates with equal power today:

I’ve come this far to freedom and I won’t turn back.

I’m climbing to the highway from my old dirt track.

And I’m stretching and I’m growing

And I’ll reap what I’ve been sowing or my skin’s not black.

I’ve prayed and slaved and waited and I’ve sung my song.

You’ve bled me and you’ve starved me but I’ve still grown strong.

You’ve lashed me and you’ve treed me

And you’ve everything but freed me

But in time you’ll know you need me and it won’t be long.

I’ve seen the daylight breaking high above the bough.

I’ve found my destination and I’ve made my vow;

So whether you abhor me

Or deride me or ignore me

Mighty mountains loom before me and I won’t stop now.

Recently, Wayne State University Press published “You Are My Joy and Pain,” a new collection of love poems by Long. Her fellow Kresge Eminent Artist Bill Harris described each poem as “a master class in technique and in her unique ability to transpose an idea into a tightly composed example of the craft of poetry.”

You can see a short film about Naomi – commissioned by the Kresge Arts in Detroit office at the College for Creative Studies – and download a Kresge-produced monograph about her life and work here.

If you are not familiar with her work, I encourage you to take a look to understand how she touched so many with her words and her heart, and why her loss is felt so deeply.