Statement from Kresge President and CEO Rip Rapson on the passing of Charles McGee, the first Kresge Eminent Artist in 2008 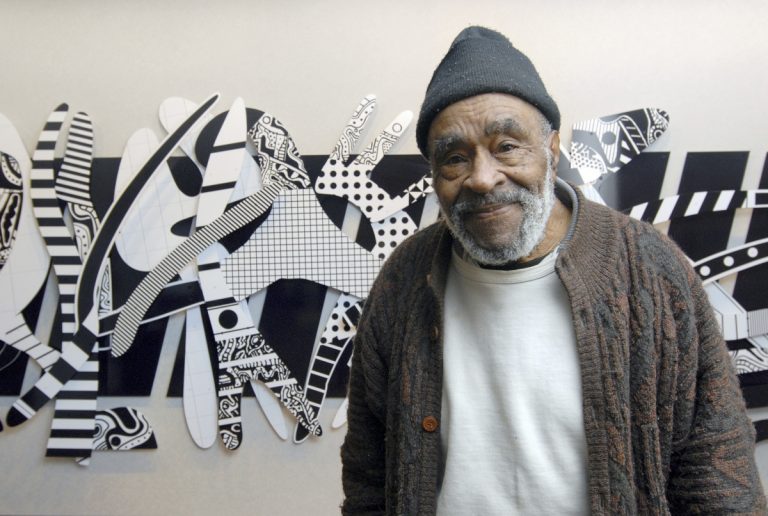 Charles McGee in front of his piece titled "Regeneration," 2007. (Photo by Ray Manning)

Charles McGee’s influence on Detroit looms as large as his towering downtown murals — he literally beckons us to look up from the everyday, the humdrum. His art is kinetic. He celebrates perpetual motion in a way that’s befitting for an iconic artist of a city that put the nation on wheels and in motion. His art proudly displays its African American roots — and affirms life itself.

As our first Kresge Eminent Artist, named in 2008, Charles set the bar for excellence and achievements in his artistic forms, and for his contributions to the cultural communities of metropolitan Detroit. He will be missed even as we reap the rewards of his long, productive life far into the future.

He had a distinguished career that included hundreds of exhibitions all around the world. An American artist of international renown, he made Detroit his home and the city his own. A teacher, mentor and passionate arts advocate, he found teaching a complement to creating art in his studio.

His work can be seen widely in and around Detroit from the Detroit Institute of Art, which has his 10-foot-by-15-foot “Noah’s Ark: Genesis” on permanent display, to his large work “Progression” at William Beaumont Hospital in Royal Oak, to Detroit’s Broadway People Mover Station, which has the 12-foot-by-17-foot, “Blue Nile.”

And in his late years, his works burst on Detroit anew.

In 2016, he created the soaring 20-foot-by-20-foot sculpture entitled “United We Stand” for the Charles H. Wright Museum of African American History. This stunning piece, among all of his works of art, speaks to his ability to unite the community, to lift us up, and to leave a lasting impact with his art that will surely keep his tremendous legacy alive.

That same year, his “Playscape II” was dedicated at the corner of McNichols and Wyoming, at what was then Marygrove College — now the Marygrove Conservancy — across the street from his studio of a half century.

And in 2019, his then 45-year-old 60-foot-by-40-foot mural on the east-facing side of what is now the Detroit Foundation Hotel at 234 W. Larned was restored to dramatic effect.

“The average person looking at these things should be able to enjoy it, and that’s the joy of making it as far as I’m concerned,” McGee once said.

Charles’ joy has been our joy over and over — and it will continue to be.

On behalf of the entire foundation, our hearts go out to all who knew and loved Charles.

(Kresge’s monograph on life and works of Charles McGee is out of print but remains available for download and reading online. A film about McGee created by Kresge Arts in Detroit, which administers the Kresge Eminent Artist award, can be seen here. A tribute to McGee, performed by Mike Ellison during a tribute to the first decade of Kresge Eminent Artists, can be seen here.)