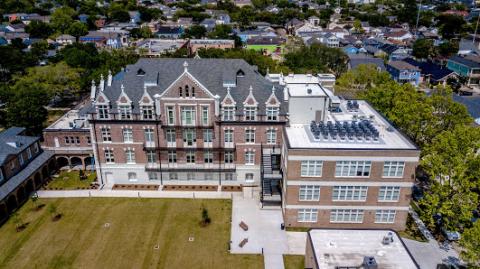 For more than a century the Bell School campus in New Orleans’ Tremé neighborhood was a hub for education, music training and social activities, with a history boasting one of the nation’s most significant African American cultural districts. Vacant and abandoned since Hurricane Katrina struck in 2005, the campus fell into disuse and disrepair.

Last week it reopened as the Bell Artspace Campus featuring 79 units of affordable housing and work space for artists, cultural workers and their families. It also features incubator space where trainings and other opportunities are available to community members, greenspace for local events and activities, and the restoration of a chapel and the celebrated band room of Bell School – which launched the careers of many well-known New Orleans musicians. 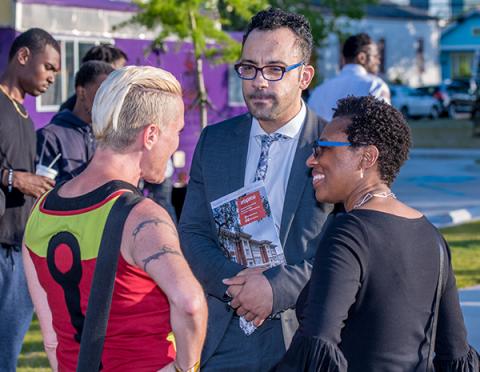 Arts & Culture Program Managing Director Regina Smith (right) speaks with Osh Ghanimah, founder and CEO of Broadway for All, and Caitlin Strokosch, president and CEO of National Performance Network/Visual Artists Newtork, during a visit to the Bell School campus.

The endeavor was an eight-year process of planning, community input, and funding support from the city, developers and philanthropy including The Kresge Foundation, which supported Artspace’s work on the project.

“The Treme neighborhood’s rich history and traditions were at the center of this effort, which brought together partners from multiple sectors around a shared vision,” said Smith. “It is heartening to see the campus come to fruition with community members at the center of it.”