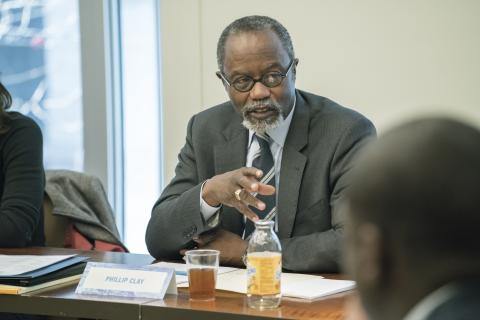 Kresge’s Education Program recently connected with Dr. Phillip L. Clay to gather his reflections about serving as a foundation trustee for the past 12 years and his partnership with the program. A former Chancellor of the Massachusetts Institute of Technology, Clay brought his passion for the transformative promise of higher education to his role as a kind and encouraging advisor and thought-partner to the Education team. Dr. Clay was instrumental in supporting the foundation’s transition from capital challenge grants to more strategic grantmaking designed to increase postsecondary access and success.

Kresge: How have your educational experiences – from student to college leader – shaped your view on the promise of higher education for our nation’s students?

Clay: I grew up in Wilmington, North Carolina, in a segregated school system. Northern missionaries who sought to bring the same education to students in the South that they provided in the North set up Williston High School in my hometown.

The community was proud of this institution because it carried with it the passion of parents and neighbors, many of whom were illiterate. Despite their limited education, these parents wanted their children to have the best education possible. And they did. Many of my fellow students went on to higher education.

The education was so good that there was controversy about what Black students should be taught – an academic education including a wide variety of subjects or a trade-oriented education. For the latter, the guiding notion was teaching Black students for the jobs they could get. In many cities, the industrial camp won, and those students received a lousy education.  In my hometown, both sides compromised, and we had both.

I came to the education field with the belief that there is no disconnect between what parents want and what is required by society.

Parents want their children to get the best education possible. But we know they’re not getting it and that creates a very serious disconnect, which as a parent and an educator, I would never tolerate.

I believe that we need to make a quality education a right for everybody. Every time I hear someone say, “We have too many people going to college, we should focus on education that will help people get jobs,” I see code language for that old model of education, the same that was present in my segregated school system.

Kresge: One of the Education Program’s strategy focus areas is strengthening Urban Higher Education Ecosystems. What’s your take on this approach?

Clay: I think it’s a wonderful and challenging initiative to consider the civic ecosystem in college access and success efforts. This approach reflects the understanding that to be a successful student, especially an adult student, we must consider the things that could stand in the way of success. That can be healthcare, transportation, food, or housing. Colleges can’t solve those problems alone. The question is how to have local partners acknowledge that there is an ecosystem that shapes the possibility for success. I think that’s a challenge, but it’s a challenge worth taking on.

Kresge: You’ve researched and written about our nation’s HBCUs. In your 2013 published report, “Historically Black Colleges and Universities: Facing the Future,” you describe the imperative for HBCUs to present a fresh and compelling case for their ability to meet the needs of Black youth. Have HBCUs made progress in that imperative?

Clay: My interest in and passion for HBCUs originates where I grew up. Most people I knew went to an HBCU.

Today we have about 300,000 students enrolled in HBCUs.  Many of the schools are in very dire straits. Those difficulties were framed long before COVID-19 and long before the recessions. I’m torn, not about whether these colleges should exist, but what is the best approach for supporting their sustainability. I can help, but each institution has to address its challenges with its own plan.

It’s important for us to support them in developing strategies that enhance their possibility of success, and then to provide them with the resources and ecosystem that will be supportive. I don’t believe that we should abandon the HBCUs. The strategy is to encourage schools to do the work that might create the best possibility for their success. Indeed, we may lose some along the way.

Some public institutions have probably done better than private ones. Public institutions have the underlying resources of tax money. But all of them, whether they’re public or private, must decide what is the case they make to this generation. The case they’ve been making for 150 years is that they are nurturing and supportive environments with great alumni networks. But I think we need a different proposition, one that is compelling regarding personal development and career success. Smaller colleges may need to decide to prioritize a discrete set of educational experiences.

Kresge: You’ve talked publicly about the importance of strengthening postsecondary institutions in Africa. From your view, what connections exist between postsecondary outcomes domestically and abroad?

Clay: When I was Chancellor at MIT, one of my jobs was to work with African countries and institutions to improve their higher education sectors. During the time that I was involved in this activity, only one African country stepped forward to express an interest in joining this effort.

I decided that one of my retirement activities would be to work with other countries to build an interest in doing that kind of activity. It’s a steep hill to climb. And every few years, there’s something which stands in the way of the progress. This year it’s COVID-19. Resources that might have been flexible or discretionary will go to meet urgent needs. In the past, it’s been terrorism, drought, or hunger. Africa’s share of the world’s global economic problems has been greater than the share in some other places, and that’s true this year.

Clay: I enjoyed working with Bill [Moses] and the team over the years. One highlight was an especially powerful visit to South Africa, and a visit to the University of the Western Cape (UWC).

UWC is akin to our own HBCUs, created under Apartheid to educate “coloureds” in a segregated setting.  At the time, the institution was relatively weak and had recently absorbed a dental school following a series of other mergers. The vision was to create a single, strong institution that offered a competitive, quality education. To highlight this shift, UWC’s then-Vice Chancellor, Brian O’Connell, chose to create a science STEM-based infrastructure and a laboratory that Kresge helped support. I visited the year after it opened and was very impressed with what the institution’s leaders had done. It represented the kind of thing that I could point other countries to and say, ‘You can do this too.’

Generally, I’m proud of the foundation’s approach to making big bets. Marygrove College was one and the Grand Bargain was another. Both illustrate the power of leveraging a modest amount of resources from the foundation (although not modest from our point of view), and the ability of the foundation under Rip [Rapson’]s leadership to pull together other partners whose combination of resources, financial and otherwise, made these things possible.

Kresge: How have you approached your role as a member of the Education Program’s advisory committee?

Clay: I ask questions. If you add up all the questions I asked during my 10 years on the board, there would be a pattern. One of the elements of my questions has to do with capacity and capability. Everybody that seeks a grant needs it. But that’s not the basis on which you make grants. It involves identifying partners who are capable and have a deep interest in the work. Program staff can support grantees in a variety of ways that magnify their impact and capability. Sometimes it means grant dollars. Other times it means asking them to do things differently. And in others, it’s helping them identify additional partners who can support their efforts. Asking questions that move program staff in those directions is how I have approached my role.

Kresge: What advice would you offer to new trustees who are considering advisory committee appointments?

Clay: Foundation trustees have two responsibilities. The first is the fiduciary responsibility to ensure resources are spent appropriately and effectively. The second is to bring their experience to bear and help the foundation identify other sources of insight and information to support staff. Beyond these two roles, and listening and asking thoughtful questions, I’m not sure that there’s anything else we do.

We applauded at times, and raised questions at other times, but I give the foundation credit for delivering.