Climate adaptation work in U.S. emerging, but not fast enough 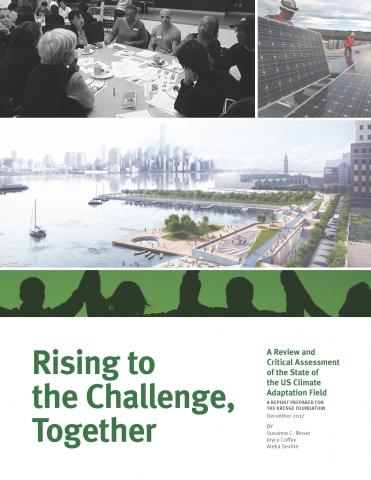 The emerging field of climate adaptation is growing in sophistication and influence, but there is a significant gap between the magnitude of the challenge and existing efforts to protect people and property from climate volatility, according to a report released today.

“Rising to the Challenge, Together” provides a critical assessment of the state of the climate adaptation field in the U.S. It was commissioned by The Kresge Foundation and authored by a trio of adaptation experts: Susanne C. Moser of Susanne Moser Research and Consulting; Joyce Coffee of Climate Resilience Consulting; and Aleka Seville of Four Twenty Seven, Inc.

The report finds that the challenge of climate adaptation and resilience is an everyday reality for decision makers across the United States. Climate change is widely recognized as a critical – possibly existential – threat to humans, other species, and the natural systems on which all life depends. As climate impacts accelerate and population grows in vulnerable areas, disasters are more frequent and more devastating.  Supercharged storms, catastrophic wildfires, and deadly heatwaves affect growing numbers of Americans – particularly those with low incomes who are least able to avoid or minimize the impact of severe events.

Communities across the country are experimenting with adaptation, defined as the management of and preparation for the impacts of global climate change and related extremes. They are aided by a growing knowledge base and suite of tools, and boosted by new actors including utility managers, private sector interests and philanthropy.

However, the field is largely crisis-driven and fails to adequately address the social equity aspects of adaptation choices, that should ensure all people benefit regardless of socio-economic status or race.  It also lacks a shared vision, consistent funding and agreed upon best practices among other shortcomings, the report found.

“Our research revealed a growing core of professionals, committed municipal leaders, engaged community residents and others who are proactively identifying ways to make their cities and regions more resilient,” said author Susanne C. Moser. “But without much-accelerated efforts to expand and professionalize the adaptation field we fear communities, businesses and particularly the most vulnerable are at growing risk. To ensure their safety, well-being and prosperity, we must rapidly come together to slow the release of planet-warming greenhouse gases; invest in smarter, more resilient systems, infrastructure and planning practices; and do both while building social cohesion and equity.”

The report’s findings and recommendations were the basis of a next-steps conversation among several dozen climate-resilience experts and thought leaders at a January 22 workshop in Washington, D.C. At that meeting participants discussed ways to better disseminate promising resilience practices, embed climate resilience in planning and policymaking, and generate new financing mechanisms for the work.

The report recommends aggressive acceleration of adaptation planning, coordination across jurisdictions, and implementation among advocates, planners, and funders. Leaders must press the urgency of addressing climate change both through adaptation and mitigation – pushing the field to think bigger, bolder and deeper. At the same time, funding support must grow and policy incentives should be aligned to support the incorporation of resilience across different practices and sectors.

“This report highlights the urgency of building climate adaptation as a field of practice,” said Lois DeBacker, managing director of The Kresge Foundation’s Environment Program. “It is critical to expand the number of people who understand the imperative of acting quickly, which actions yield the best and most effective protections against climate change-fueled events, and how to approach climate resilience in ways that advance equity.”