Rapson: Walter Mondale was ‘a public figure of such transcendent decency and compassion’ 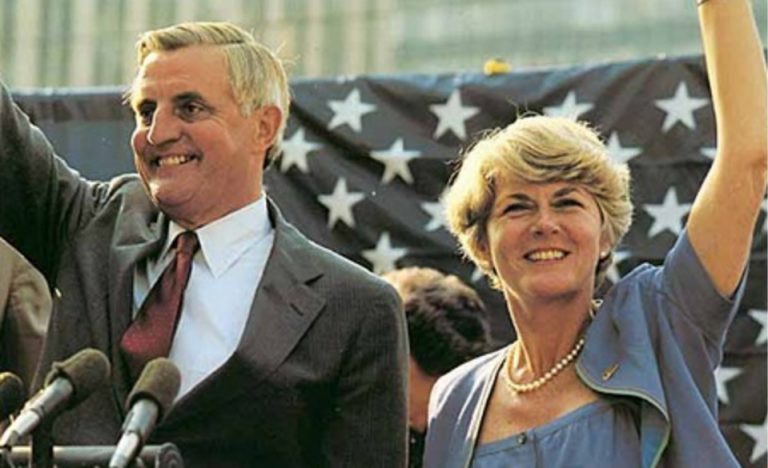 The nation lost an extraordinarily good and important public servant Monday. Walter Mondale – state of Minnesota attorney general, United States senator, vice-president, Democratic nominee for president – was one of the pillars of a period of Minnesota politics that was remarkable for its integrity, competence and accomplishment. Mondale was a close friend and protégé of Hubert Humphrey . . . a founder, with my former boss Don Fraser and former Governor and U.S. Secretary of Agriculture Orville Freeman, of Minnesota’s unique Democratic Farmer-Labor party . . . a mentor to former Minnesota Senator Paul Wellstone . . . and the boss and counselor of a young, ambitious attorney named Amy Klobuchar. At a time when so much pain and darkness is emanating from my previous home, it is somehow reassuring to be reminded that that same state could have produced a public figure of such transcendent decency and compassion and commitment to the public good.

I first was introduced to then-Senator Mondale in 1974, when, as the person responsible for the kids and families agenda of U.S. Representative Donald Fraser, I attended a briefing on children’s nutrition support programs conducted by the Senate Select Committee on Nutrition and Human Needs. The briefing was conducted by the committee’s staff director, Alan Stone. Stone was whip-smart, and the nation’s leading expert on children’s feeding programs and policies. I approached him afterwards to ask how I might best learn more about federal children’s policy. He smiled and said, “That’s easy. Just pay attention to what Senator Mondale says and does. He is, in my view, the most thoughtful and effective senator on issues of importance to low-income families.”

I took Alan’s advice. I introduced myself to my counterpart on Mondale’s staff, a guy named Mark Dayton, who would go on to be a U.S. senator himself, and later a two-term governor of Minnesota – the quality of Mondale’s staff mirrored the quality of the work Alan had underscored. And indeed, what I learned about children’s food, education and human services policies, I learned from Alan, Mark and the senator.

Within two years, Mondale had become President Carter’s vice-president. The Carter Administration would become deeply engaged in the next assignment I was given by Fraser: advancing a bill to extend full wilderness protection to the one-million-acre lakeland wilderness called the Boundary Waters Canoe Area (BWCA), on Minnesota’s northern border. Over the next two years, Mondale and his staff would stay deeply engaged to ensure that the intense political infighting that attended the bill’s progress didn’t derail our success.

I had the chance to spend time with Mondale just three years ago at the celebration of the 40th anniversary of the passage of the BWCA Wilderness Act. He was in his early 90’s, and moved slowly, but was sharp as a tack. He spoke with enormous command of detail of the legislative fight. But perhaps even more impressively, he spoke eloquently, personally, and passionately about the value of environmental stewardship, the need to afford all people the opportunity to be able to experience the wonder, awe, and regeneration that comes with parks, wilderness and open space. And he injected wit and irony with the skill of a stand-up comedian. A heavy message leavened by the humor and self-deprecation that had been his trademark as an elected official.

A number of years after his unsuccessful run for president, Mondale delivered a six-part lecture over as many days at the University of Minnesota’s Humphrey School of Public Affairs. One dedicated to the evolution of federal children’s policy. A second to the changed institutional role of the office of vice president. A third on international affairs. And so on. I attended each one. The series wasn’t about partisan politics, but about the democratic process – how things got done. It wasn’t a tell-all, but a tell-about – helping the audience situate the contemporary state of federal policy in historical terms. It wasn’t a set of dry lectures, but a lively, well-paced suite of articulations of a worldview, grounded in anecdotes, humor and metaphor. It was a tour de force. He would later draw these observations into his book, The Good Fight: A Life in Liberal Politics (2010).

I last saw Mondale at a memorial service for Don Fraser the next year. The Fraser family had asked former St. Paul Mayor George Latimer, the vice president, and me to provide remarks. I sat between the two men. I noted that Latimer had scribbled three or four sheets of notes, but that the vice president had none. Mondale was the first to speak. Without a misplaced sentence, he spoke for fifteen minutes about his and Fraser’s relationship in law school . . . about their creation with Humphrey and Freeman of a new political party in the 1950’s . . . about the process by which Fraser had worked with George McGovern to champion the reforms that would shape the 1972 Democratic Convention . . . and about his belief that Fraser epitomized the highest and best values of public service. It was a master-class – not just in political history, but in memorializing the memory of a colleague and friend.

Alan Stone and I exchanged emails this morning about Mondale’s character, legacy and service. I leave you with Alan’s deeply moving observations about this remarkable man:

Aren’t we both lucky to have known him and worked with him?

And increasingly it seems he will be seen as one of the architects of the last era of sane national politics in the U.S. Both sides will mourn him, both sides will have fond memories of him, both will miss him. He basically didn’t let the side he was on overcome his humanity, humor, and goodness to all people. And ironically, this allowed him to do much for the side he dedicated his life to and the people it served. This is the lesson of his life: be big hearted; you will be loved, and you will do good work.

It was more normal then. A wise and funny senator with great staff, dividing up with other senators the questions they would ask at hearings, the amendments they would offer at mark-up, the remarks they would make on the Senate floor.  Then-Sen. Mondale was a founding member of a committee for which I served as staff director, the Senate Select Committee on Nutrition and Human Needs, known to the press and the public as the Hunger Committee. George McGovern chaired the committee which also included Ted Kennedy and Hubert Humphrey. All Lions of the Senate.

Yet even there Sen. Mondale stood out, for his knowledge of the legislation, his tireless fidelity to the issues, and his ability to get things done. Over the near decade of its existence that tiny committee helped increase tenfold our national commitment to feeding low-income children and families. During this time, I doubt he ever put out a press release extolling his victories, instead sharing credit with others, praising the process, looking ahead and for new ways to build another coalition. That said, there is no doubt he helped lift up many millions of lives while calling America to meet her promise to care for everyone, equally.

One day – perhaps it was Inauguration Day, but it fogs with time – a crowd gathered at the Capitol steps to send him off. Seated on top of the back seat of a convertible, he waved into the crowd and did one of those (reserved, Minnesota versions) of finger pointing to a particular person in the crowd. I was late to realize he was pointing and smiling at me, but when I caught on and waved back, his smile broadened widely into that wonderful joyful response the world had come to recognize, and to love. That moment, and being on the convention floor when he was nominated in San Francisco, were highlights for me in a friendship filled with them.  He was an optimist at his core and now as he passes on, this is the message I will embrace: love service, love people, and good will come. It did to him.