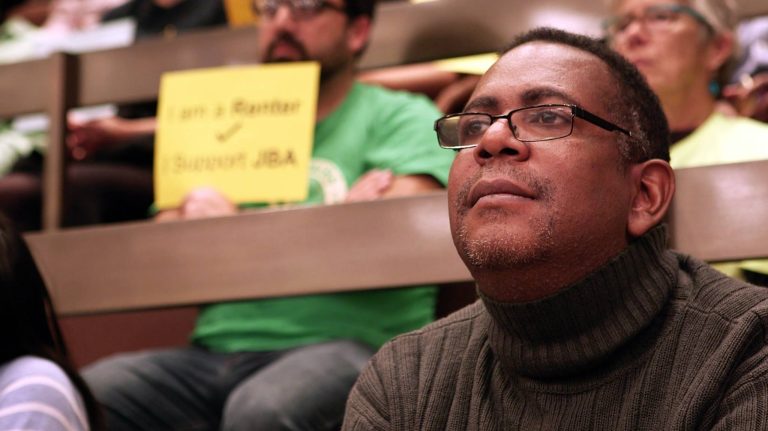 A regional network of the national “Homes for All” campaign, Homes for All South consists of seven member nonprofits that individually and collectively work to promote equitable, community-led development through local and regional community organizing, base-building and advocacy in communities of color, low-income communities, and other marginalized communities. A grantee of Kresge’s Advancing Health Equity Through Housing initiative, HFA South works in six states in the American South, including Texas, Louisiana, Mississippi, Georgia, Florida and Tennessee.

“We think that housing is a human right and that bringing communities together and lifting up voices that don’t always get heard is how we can change policy and encourage transformative justice,” explains HFA South’s Regional Coordinator Darnell L. Johnson. “We aren’t trying to be a band aid for an immediate need but instead look at the root causes of gentrification and displacement in each of our cities and map out strategies that bring communities together and hold elected officials accountable. Our primary focus is housing, not only because people need a safe place to stay but also because we see housing as the basis for a lot of other critical issues that need to be addressed, like health, childcare, and education.”

In the below interview, Johnson discusses the state of housing in the American South, where and how HFA South member organizations are successfully promoting affordable housing and protecting tenants’ rights, and the impact of COVID-19 on their work.

What are some of the unique challenges and opportunities that come with doing this work in the American South?

We work in places where we understand the deep roots of white supremacy that is the base for so much in the South. There is an imbalance of power here. A lot of our elected representatives don’t look like our communities, and there is still a strong feeling of colonialism, white supremacy and slavery in many of our communities. We are still trying to deal with those issues of race. That said, we also know that a lot of things that get started in the South have a ripple effect to other parts of the country, and so I think all of us believe that if we can make it work in the South, it may work in the rest of the country, too.

How does that racial dynamic play out in your housing work?

We see that imbalance of power, and that racial history, play out in who does and doesn’t own land and housing. We also see it in how corporations are now taking over the rental market, and in the ways that the Department of Housing and Urban Development is getting into all of these “public-private partnerships” that have been the entryway for diminishing our housing stock. Many cities are investing less in rehabbing their housing because they know a private company is going to come in. We see that as a problem because that private company doesn’t have the same public interest in keeping those homes affordable or maintaining them in the ways that meet the demands of public housing residents. We also know that rent relief isn’t enough so we are calling on developers to have a more conscientious eye when coming into our communities to make sure they are engaging with the communities so that the communities are partners and have a seat at the table and a sense of ownership in how their community grows.

Are the developers generally receptive to that?

Yes, if there’s also pressure, both from our base and from the public.

Can you give me an example of how that’s worked in practice?

One of our members in Miami named “Struggle for Miami’s Affordable and Sustainable Housing,” more commonly known as “SMASH,” just started a pilot project. They wanted to create and grow a Community Land Trust, so they actually bought a property from a developer. They told the developer that they had plans to keep the property affordable over the long-term and use it to house survivor women who have gone through trauma and are reentering the community. The nonprofit has been able to pressure both the developer and some banks to look at loan refinancing that is more affordable. They’ve also been able to pressure the City of Miami to add a tenants’ bill of rights and have pressured the city to sell more land to nonprofits that can turn it into permanently affordable housing instead of selling it to developers.

Is that property currently occupied?

Yes, it currently houses five women and has been placed in a land trust to help it remain permanently affordable. It’s an interesting pilot because part of the ask of the women staying in the house is that they give a certain amount of their time to community organizing and base-building and spreading the message about community land trusts in the Black, poverty-stricken neighborhood that that house is in, with the goal of building community awareness around community land trusts as a tool for promoting affordable housing. They aren’t being asked to quit their jobs and become housing advocates, but they can help the community to see that it can take action and can have power. We’ve noticed that a lot of our member nonprofits get into the trap of helping people with eviction and then once they’d been helped, that person is gone. Our theory of change is that once we’ve helped that person with their eviction, or whatever the challenge is that they are facing, we can bring them into the movement and they can be an advocate wherever they are.

How has the COVID-19 pandemic impacted your work?

I think the pandemic brought together political pressure and community advocacy in a way that gave cover for political will to shift because all of the politicians were in the pandemic together in their communities. None of them could leave home. Their complaints started sounding similar to those of our communities’, even though they were in a different economic place. And we used that leverage to say, ‘Your political will needs to change.’ We also saw the rise of homeowners who thought they were safe because they owned their homes and weren’t renters, and we saw that in the pandemic, their plight was the same as the renter or the owner of a mobile home, and we were able to make those connections and amplify them with a greater sense of urgency.

We’d done a lot of work in the lead up to the pandemic around policy dreams and alternative solutions to housing problems that go beyond the traditional box of solutions, and some of those alternatives are now being tested because the pandemic allowed us to demand that they be considered as real options. For example, one of our demands early in the pandemic was to cancel rents, mortgages and utility bills. Now, we understand that in today’s world we can’t realistically do that. But that call created space for ancillary things that really could be done, such as rent reductions and renegotiations, moratoriums on eviction, and first right of refusal, for example that allowed some families to become homeowners. All of these other possibilities became more real because they were less extreme than cancelling the rent.

That said, the pandemic has also brought on all kinds of inequities and shown all kinds of failures of our system that have disproportionately impacted communities of color.  The housing crisis is a racial justice, gender justice, and class struggle issue that plays out across multiple dimensions. We know, for example, that Black, Indigenous and other People of Color have been disproportionately impacted by housing instability — both historically and now during the COVID-19 pandemic. Even before the pandemic, neighborhoods from across the country with more renters of color face higher rates of eviction, and that 1 in 5 Black women are evicted compared with 1 in 15 white women.

We are seeing that renters of color have less confidence in their ability to pay their rent, and more difficulties staying current on rent. And, of course, there are the health disparities and lack of access to vaccines, and lack of access to healthy places for kids to go during the pandemic with the closing of community parks. The pandemic just made all of those things worse.

And then we are seeing where people are profiting from the pandemic. Specifically, a rise in corporate landlords who were able to hurry up and push tenants out at the start of the pandemic before eviction moratoriums were in place. These moratoriums weren’t standardized across communities and so different cities had different rules about who qualified for pandemic relief, the amount of time landlords had to serve a notice of eviction or evict the tenant, things like that.

So, what came out of that is a resurgence of strong demands such as a standard rule that tenants are given at least 60 days-notice prior to evictions or the right of first refusal on property sales. Some of our members have advocated for stronger renter and tenant protections, and are now challenging cities to add budgetary line items or cabinet positions that solely focus on issues facing renters. We are pushing for those changes in states across the nation and we are educating candidates running for office and holding them accountable.

What opportunities do you see for meaningful change in the coming years?

Some of our residents are stepping up into decision-making roles, so that will create more opportunities and solutions that help a community to grow. We also see more opportunities from non-traditional lending sources, including the community’s pooling of money for lending and investment. I anticipate seeing a resurgence of how we use land in the South for food and farming and other ways that communities can sustain themselves off of the land and support local entrepreneurs and small businesses that are part of the fabric of the community.