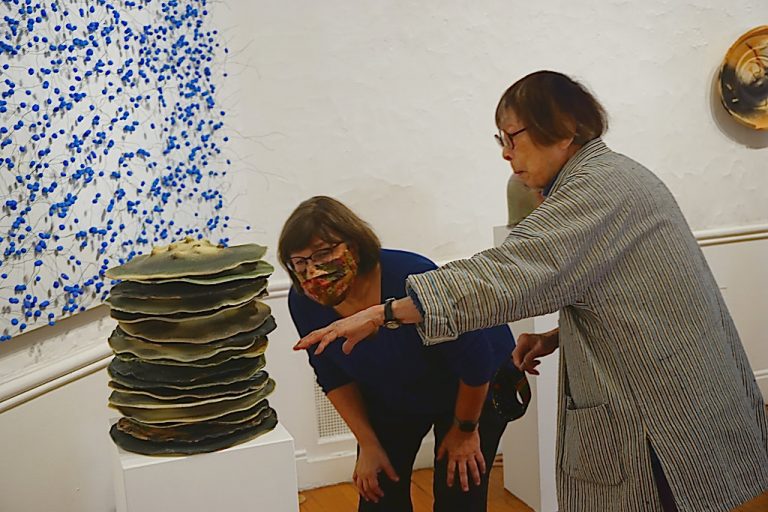 Marie Woo discusses one of her iconic pieces with MaryAnn Wilkinson at the Scarab Club.

To celebrate 2020 Kresge Eminent Artist Marie Woo, Kresge and an esteemed Detroit arts institution, the Scarab Club, are teaming up for a virtual unveiling of a career retrospective and the launch of a monograph of her life and work.

The event, dubbed “A Moment with Marie Woo,” will be available online on Kresge’s YouTube page and other sites beginning at 7 p.m., Friday, Oct. 16. It coincides with the official opening night of “Marie Woo: Clay Quest” at the Scarab Club and the release of the Kresge-produced monograph “Wonder and Flow.” (To reserve a complimentary copy of the monograph visit our Kresge Eminent Artist page.)

In January, Woo was named as the 12th Kresge Eminent Artist, an annual honor dating back to 2008 that honors a metro Detroit artist for a lifetime of contributions to their chosen art forms and the cultural communities of the region. The Kresge Eminent Artist designation includes a $50,000 no-strings-attached award and the creation of the monograph by the Kresge Foundation.

“Marie Woo has been a transformational force in the development and elevation of her art form, and in the enrichment of our cultural community – the bases for the Kresge Eminent Artist Award,” Rip Rapson, president and CEO of The Kresge Foundation, said when Woo’s award was announced.

“On the one hand, she is a prominent student of deep traditions, including Chinese folk pottery, with all of its functional beauty. On the other hand, she is a dynamo within the contemporary practice of ceramics that challenges conventional notions of function and beauty. Her creations reflect a phenomenal level of craft and a fluidity of mind to which we can all aspire,” he said.

During Friday’s program, Rapson will formally launch the book, which will be available for order by mail at not cost, and as an immediate download.

The program will also include an interview at the Scarab Club between Woo and MaryAnn Wilkinson, the club’s executive director; a short video about the production of the book, led by the team of editor Nichole Christian and designer Patrick Barber; as well as remarks by Don Tuski, president of the College for Creative Studies, and Christina deRoos, executive director of Kresge Arts in Detroit.

Christian said she and Barber were humbled by the experience of working on the monograph with the 92-year-old Woo, who has lived a life and practiced the art of knowing “what’s essential.”

“She knows what it means to put something together and not be heavy handed, to not add extras. When it’s enough, she knows that,” said Christian of the ceramicist whose works are in permanent collections around the globe and whose influence as an artist, scholar and educator is likewise widespread.

“Every life has a thread, and Marie Woo’s work is about pouring yourself in. Pouring yourself in and really giving time to a thing and letting a thing take its own journey,” said Christian.