A new series of research reports, undertaken in partnership with The Kresge Foundation and the University of Southern California Center for Philanthropy and Public Policy, which has been published in the Winter Issue of the Stanford Social Innovation Review (SSIR), contends that the work underway to transform Detroit represents a potent force for change for legacy cities in the American Rustbelt, and that all cities can learn a great deal from the experience of Detroit.

The SSIR supplement, Bold Leadership and the Future of American Cities: Drawing on Detroit, is based on a series of interviews and roundtable discussions with leaders from the public, private and philanthropic sectors in Detroit and across the nation. A national advisory committee provided ideas and context for the inquiry, and leaders from across the country provided input at a national forum on leadership and the future of American cities in May of 2016.

The report’s findings are reported in four articles examining opportunity in urban crisis, the role of philanthropy as catalyst, the importance of building economic flywheels, and the role and importance of cross-sector leadership. The analysis offers important ideas and has significant implications for governance and philanthropy. Key insights include: 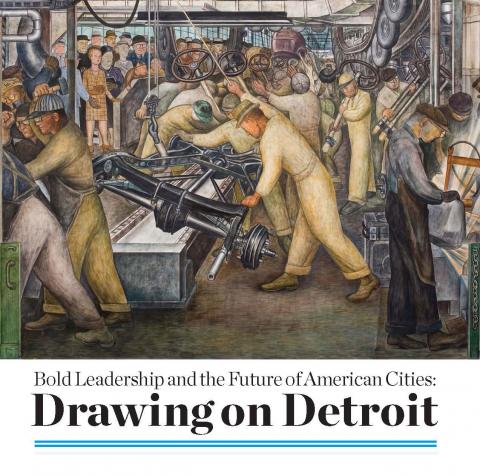 “Philanthropy has acted boldly in Detroit in reimaging the city’s future through a number of catalytic actions,” says Rip Rapson, President and CEO of The Kresge Foundation. “The challenge of revitalizing Detroit has created an opening for philanthropy to step up in a leadership role, making big bets on civic infrastructure. We are thoughtfully marshalling enormous forces and innovative ideas to create a new and better future for Detroit, and, in the process, trying to shed light on how other American cities might learn from this work and how to apply these lessons.”

In examining the effort to revitalize Detroit, the inquiry identifies two key elements that have made the experience possible and offer lessons for government, philanthropy and others for moving forward.

The first is the vital importance of cross-sector leadership. Detroit has fostered the development of leaders, institutions and ideas from all sectors and sections of the city, collecting ideas and creating a sense of momentum.  And, while it has built a broad and diverse base of leadership, it has also drawn upon exemplary and visionary leaders who stand out as examples for others and model effective practices.  Leadership has also evolved into more flexible roles with those in the public, private and philanthropic sectors taking on different tasks and responsibilities depending on circumstances and capacities and reinforcing each other. These leaders have formed and drawn upon formal and informal networks to nurture collaboration and achieve shared objectives.

Secondly, the inquiry identifies a set of frameworks and approaches that have been effective in Detroit and offer potential for other cities. These include creating a capacity to organize ideas and recognize how they fit into larger systems, and establishing ambitious long-term strategies as early as possible. It is also important to build a protected environment where leaders and institutions can gain respite from chaotic forces in order to develop new ideas, take on new roles and risks, and develop new strategies.  Cities in distress must also mount tangible efforts to build or repair public trust. The report further urges cities to prepare for crises before they occur, cultivating leadership, building institutional capacities and forming relationships across sectors that can help them become more resilient.