Jobs linked to the growth of green infrastructure are expected to expand in coming years and will provide valuable opportunities for urban residents seeking entry-level work with advancement potential, according to a report released March 27, 2017. The authors conclude that industry-led efforts to develop the first national green infrastructure certification program could professionalize the field and accelerate job growth. 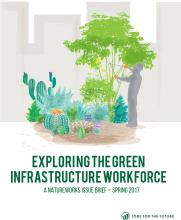 The report, Exploring the Green Infrastructure Workforce, found that the projected employment growth represents a chance for low-income, low-skilled workers currently underrepresented in the workforce to earn competitive wages. Jobs range from park maintenance to stormwater management and installation of environmentally friendly products like pervious pavement. The brief includes profiles of seven cities that highlight the different approaches municipalities are taking to the expansion of green infrastructure and its impact on workforce development. A video about the project and report findings has also been released.

The report was authored by Jobs for the Future, a nonprofit working to increase educational and economic opportunity for all, as part of NatureWORKS, a national initiative to understand the jobs, careers, skills, credentials, and potential of the U.S. green workforce. The initiative was funded by The Kresge Foundation and the U.S. Forest Service’s National Urban and Community Forestry Grant Program as recommended by the National Urban and Community Forestry Advisory Council.

“The results of the report tell us that there is an opportunity for entry-level jobs with the possibility for advancement, as well as the chance to develop the certificates that will allow people to have marketable credentials,” said Mary V.L. Wright, senior director of Jobs for the Future. “It is a win-win for cities to invest in sustainability and achieve both a healthier, greener community and a job development program.”

Studies on green infrastructure initiatives have documented their ecological, economic, and public health benefits. But there has been little examination of the workforce needed to install and maintain green infrastructure systems. There is particular interest in understanding the potential to provide employment opportunities for low-income residents and other underserved populations. These opportunities can cut across both urban and rural communities.

The findings highlight opportunities for low-income workers in urban areas where green infrastructure is becoming more common as a cost-effective strategy to control storm water, filter pollutants, and enhance livability.

“Communities across the nation are benefiting from clean, efficient, and cost-effective natural solutions to high-heat, flooding, and pollution—problems that will become more persistent with a warming planet,” said Jalonne White-Newsome, senior program officer with The Kresge Foundation’s Environment Program. “It only stands to reason that the people in those communities should benefit from the jobs and economic activity taking place in their neighborhoods.”

As the number and scope of jobs in this field increases, there are opportunities to develop distinct, specialized green infrastructure jobs. Some contractors have already begun this specialization, such as installing pervious pavement or living green roofs.

Existing green infrastructure jobs typically require high school completion. Wages are in line with other entry-level positions, with a median wage of $15.78 per hour. There also are opportunities for career growth within the industries that employ workers in these fields, particularly in management and business ownership.

The report found that existing certifications and credentials in the field have not been broadly adopted and are typically not tightly focused on the skills necessary for specialization. Advocates are optimistic that a national certification program under development will enhance job training and education, help professionalize the workforce, increase green infrastructure development, and expand the number of jobs available.

Each city profile includes key green infrastructure goals of the city, selected activities that illustrate progress toward those goals, and an estimate of the workforce employed in the field.