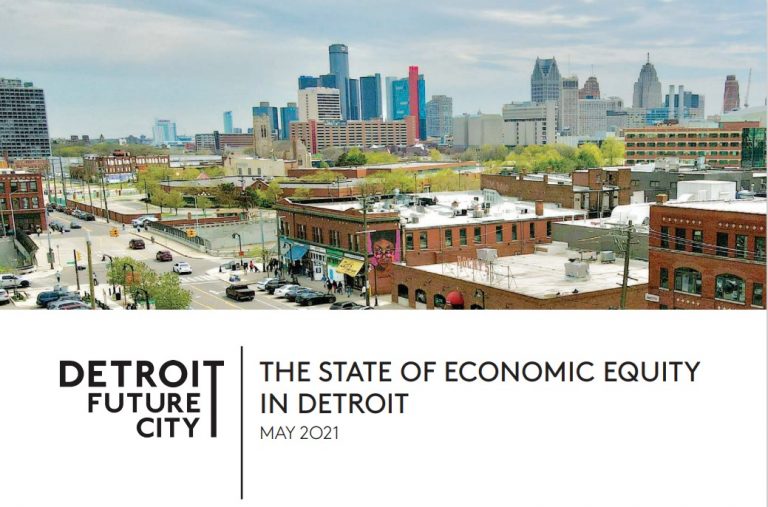 The report illustrates that, as Detroit continues its revitalization, the economic opportunity gap for Detroiters and people of color remains, and in certain areas has widened. The data demonstrates that policy and resources need to be structurally repositioned to create sustainable systemic change.

“The State of Economic Equity in Detroit” presents data by race/ethnicity and geography in six key focus areas: income and wealth-building, access to quality employment, business and entrepreneurship, education, health, and neighborhoods and housing.

This report is the culmination of a yearlong planning and engagement process with input from nearly 500 stakeholders, from national experts to Detroit residents, which commenced after the launch of DFC’s Center for Equity, Engagement, and Research (The Center) in February 2020. The Center was formed to build on DFC’s portfolio of 20-plus research reports, including the 2017 release of the “139 Square Miles” and 2019’s “Growing Detroit’s African-American Middle Class” reports.

“DFC was founded on the goal of evidence-based framing that informs and catalyzes change, and now we have established a department that advances this work at the intersection of race and economic equity,” said DFC CEO Anika Goss. “This report is the benchmark from which plans and policies in Detroit and our region should be made, and The Center is prepared to take action in partnership with our community to ensure progress. The racial inequities and economic disparities are deep, our residents can no longer wait, the time is now.”

Kresge Detroit Program Managing Director Wendy Lewis Jackson echoed that sentiment. “This is the most comprehensive and sophisticated compilation ever of data to track economic equity — which is to say, economic inequity — across our region. This groundbreaking report equips community leaders with the data to inform solutions for inclusive growth and prosperity.”

The Kresge Foundation has been a supporter of Detroit Future City since its inception — including support for the new Center for Equity, Engagement and Research — and is one of the funders of the new report.

Jackson added, “This report makes clear why the cause of economic justice must be elevated to an immediate imperative.”

DFC is driving this effort forward through a shared vision for economic equity that was developed through stakeholder engagement. This vision states that, in an economic equitable Detroit, all residents are meeting their unique needs, prospering, fully and fairly participating in all aspects of economic life within a thriving city and region.

Based on the data presented in this report, DFC lays out several recommendations to create a path towards economic equity, including the improvement of educational outcomes at all levels, an increase in the share of jobs available to Detroiters who do not have a bachelor’s degree, increased access to capital for minority-owned small businesses, improved access to affordable quality health care, and to grow and strengthen middle-class neighborhoods.

“We are committed to active engagement at every level to move the recommendations in this report forward,” said Ashley Williams Clark, DFC Director of The Center for Equity, Engagement, and Research. “To move our city and region towards economic equity, conversations cannot happen in a silo. The Center has the opportunity to provide leadership, accountability, research, convening, and customized expertise to support stakeholders in collaboratively working to rectify legacy issues and justly attain economic equity in Detroit.”

“The State of Economic Equity in Detroit” has 103 pages of robust information with 22 data indicators, explanations of why each indicator is an important measure of economic equity in Detroit and the region, as well as provides “what if” scenarios to provide an aspirational vision towards achieving economic equity, and next step recommendations.

For several years, DFC has been focusing on data and strategies to create equitable middle-class neighborhoods, citing that they are essential markers of the city’s health, growth and prosperity. This latest report shows that inequities in income for Detroiters, as well as systemic barriers to growing wealth, are paramount and largely due to disparities in education and employment, barring residents from opportunities to enter the middle class and achieve economic equity.

In 2010, there were 22 neighborhoods in the city that met the definition of “middle class,” by 2019 there were only 11 neighborhoods. The report shows that African American Detroiters’ median income has only increased by eight percent in the last 10 years, while white Detroiters’ income has increased by 60 percent. As of 2019, the medium income for Detroiters was $33, 970. Additionally, more than half the city’s residents are housing cost-burdened, meaning over 30 percent of their income goes toward housing cost.

Contributing factors to these disparities can be traced to early education outcomes and education attainment. The report shows that Michigan’s education system is not adequately preparing all students for the workforce. In Detroit, only 16% of African-American third graders are proficient in English Language Arts compared to 31% of white third graders. Additionally, only 17 percent of Detroiters have a bachelor’s degree.

“When you consider that the median wage for a person with a four-year degree is more than $15 higher than for a person without a four-year degree and 83% of Detroiters don’t have a 4-year degree, along with the data showing that the primary job growth in Detroit has come in the form of low-wage jobs, the systemic inequities are pervasive and bar African Americans and other people of color in Detroit from reaching the middle-class,” said Williams Clark. “There needs to be more jobs that do not require a four-year degree, but still pay a middle-class wage while we also strengthen our educational system.”

The report presents a “what if” scenario that suggests if the household income for all residents in Detroit was raised to $50,000, then the cost burden for Detroiters would significantly decrease and more middle-class neighborhoods would be created.

Entrepreneurship can have a profound impact on economic equity, particularly in job growth and wealth creation. In Detroit, more access to capital and supports for minority-owned companies is essential before progress can be made. In 2018, Detroit made up nine percent of the region’s small business jobs, but only accounted for 6 percent of the region’s small business loans, and, in the city, lending rates are at about 75 percent of that region and state. Though these inequities are present, firms in Detroit to comparatively well to the region in terms of number of employees and revenue.

“The State of Economic Equity in Detroit” also notes other areas of progress, and that as progress continues, it must be made more equitable. In many ways, Detroit’s economy is close to being restored to levels seen in 2001, prior to the Great Recession. However, the full economic impact of the COVID-19 pandemic is yet to be seen. Additionally, the report shows that there have been improvements to health care coverage, with more than nine out of 10 Detroiters being covered by health insurance. Disparities in life expectancy persist, however, with African Americans’ life expectancy being 72 years old, seven years lower than for white residents. This suggests an issue with the accessibility of health care, even if coverage is present.

The Center aims to help advance economic equity in the region through a number of initiatives, working in partnership with stakeholders to educate, advocate and engage at every level. The Center will work with stakeholders to help use this data in policy recommendations that address systemic inequities, as well as deepen the research within the report’s sections to provide further data and recommendations in an accessible format. This includes the June release of an interactive web-based dashboard to track economic equity over time.

The Center will continue robust community engagement to continuously gain resident feedback on the direction of its work. On June 24, DFC will host its second annual Equity Forum, which will be keynoted by Dr. Andre Perry of the Brookings Institute and Dr. Darrick Hamilton, founding director of the Institute for the Study of Race, Stratification and Political Economy at The New School. The Center will also hold a number of engagement events to help shape priorities around additional data reports and policy.

The report is funded by The Kresge Foundation, Hudson-Webber Foundation, Ralph C. Wilson Jr. Foundation and JPMorgan Chase & Co, and was developed with support from a project team that included Mass Economics, Connect Detroit, and PolicyLink.