Share
Email
Remaking federalism: How states can realign and rebuild a stronger and healthier union 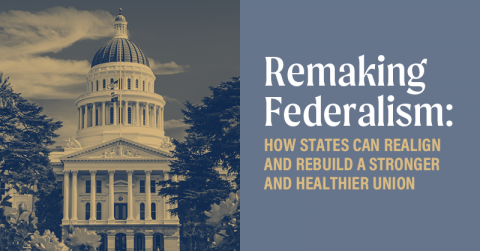 In Remaking Federalism: How States Can Realign and Rebuild a Stronger and Healthier Union, Neil Kleiman observes that there has been a redefinition of intergovernmental relations, one in which the country’s densest population centers have lost autonomy and authority in recent years. One of the consequences of this erosion is the growing use of preemption legislation – the use of state law to nullify a municipal ordinance or authority – that has chilled and even blocked important local initiatives throughout the United States.

The COVID-19 pandemic starkly illustrates these dynamics and the importance of state policymaking. It was originally written and completed just before the pandemic but has been revised in light of the crisis.

The core findings still hold – state policy in recent years has become more ideologically driven and there is a growing tendency to strip authority away from urban population centers. But the report’s prognosis is far more hopeful as the country will now enter a critical phase in which federalism demands a serious and intentional revision. Once we emerge from the current public health catastrophe, there will be a need to revise fiscal outlooks, government relationships and partnerships.

America’s future will depend on refashioning and getting the balance right – clearly, fairly and effectively distributing authority and strengthening the bond between government levels that has frayed in recent years

The report’s conclusions are encouraging: There is a growing number of policy actors in cities across America organizing and advancing a counterweight. In many states, mayors, foundations, universities, professional organizations and advocacy groups are beginning to work both collectively and strategically, the report notes. On a parallel track, a number of government and legal scholars are redefining city and state relations by drafting new frameworks that ensure state authority while also allowing cities to advance policy that protects and supports their residents. This white paper details this progress and spells out a path forward for cities to regain rightful self-governance.

The report offers the following key recommendations to restore this balance:

In summation, this report examines the diminished authority of local governance in the United States and what can be done about it. The report found that far greater collaboration has emerged amongst cities, professional organizations, universities and advocacy groups in recent years. Additionally, both local and national philanthropists have a greater appreciation of strategy and the need for funding consistency and coordination. But to reach anything akin to policy balance at the state level requires a thorough re-examination of intergovernmental relations that better protects both public will and local authority. This change, in turn, should be complemented with state-level agenda setting and leadership development. Finally, the white paper recommends that private philanthropy step up with significant, consistent investments to support this crucial infrastructure.

About the research paper’s itself and its methodologies: The primarily qualitative approach included a thorough literature review, examining local and state documents and related articles, and interviews with more than 40 field leaders including state elected officials, nonprofit leaders, foundation program officers and national policymakers focused on intergovernmental affairs. This project is the product of the NYU Wagner Innovation Labs. It was written by Neil Kleiman (a longtime urban policy researcher and policymaker as well as an academic at New York University’s Wagner School of Public Service and the Center for Urban Science + Progress), with contributions from Kim Haddow from the Local Solutions Support Center, and with support from the Kresge Foundation.