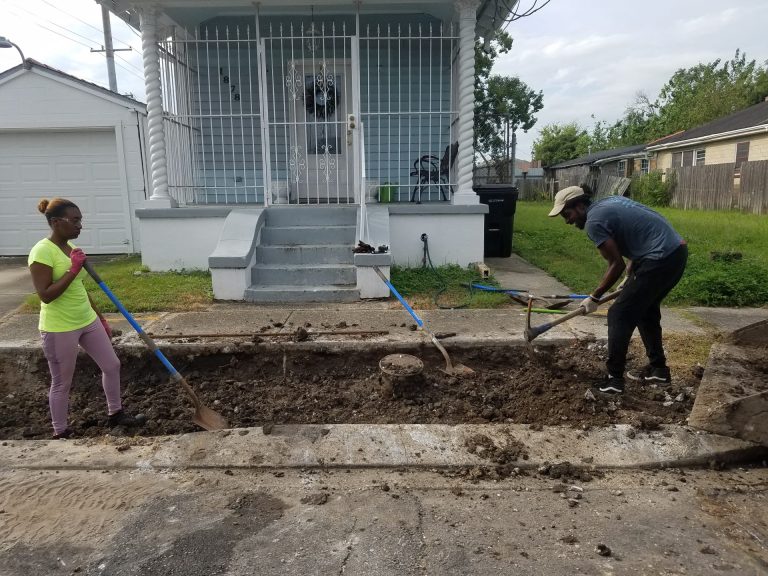 New Orleans, LA —  Water Wise Gulf South, Healthy Community Services and other Black-led community organizations in New Orleans, LA today released a new economic feasibility report: The Benefits of Community-Driven Green Infrastructure, which analyzes the economic benefits of investing in green infrastructure projects to prepare communities for worsening climate crises like urban flooding. The report was prepared by Earth Economics with support from The Kresge Foundation and the Institute for Sustainable Communities.

View a CBS interview with Angela Chalk of Healthy Community Services about these efforts.

The analysis found that every dollar invested in green infrastructure projects in New Orleans produces six times higher returns in economic, social and environmental benefits, with the potential for tens of millions of dollars in additional local benefits annually.

“We expect people — particularly Black and Brown communities — to be resilient following a natural disaster. What we really need is resilient green infrastructure to prevent flooding damage and help communities recover faster and more equitably,” said Angela Chalk, executive director of Healthy Community Services. “It’s time for the local, state and federal government to start listening to our communities and invest in solutions to build equitable and lasting green infrastructure that creates enormous economic opportunity.”

The groups are also hosting a groundbreaking event today for a new stormwater drainage system in New Orleans’ 7th Ward, at the intersection of Saint Bernard Avenue and North Claiborne. The project is one of three large-scale anti-flooding developments in New Orleans’ most heavily impacted neighborhoods, the 7th and Upper 9th Wards and Tremé. The latest in a series of more than 150 local green infrastructure installations in the past seven years, the three developments are designed to collect millions of gallons of rainwater. In addition to the report, the projects also received backing from The Kresge Foundation and the Institute for Sustainable Communities. No taxpayer dollars were used for the planning, design, implementation or maintenance of these projects.

“If the government doesn’t invest in the infrastructure that Black communities need to safely manage stormwater levels, then those communities are forced to solve their neighborhoods’ flooding problems themselves,” said Jeff Supak, co-founder of Water Wise Gulf South. “That’s just wrong. As Congress debates one of the biggest infrastructure bills in modern history, our green infrastructure projects in NOLA — and the associated economic benefits of creating resilient climate infrastructure — can serve as a playbook for government officials to help scale projects like ours nationwide. It’s the only economically viable path forward.”

Below are some of the key economic findings from The Benefits of Community-Driven Green Infrastructure report:

The report centers BIPOC voices in the conversation around climate solutions, demonstrating how initiatives developed by communities on the front lines of climate change can be the most effective. Many Black communities bear the physical and economic brunt of urban flooding, as was seen when Hurricane Katrina caused the most extensive damage to NOLA’s Black neighborhoods and recently when Hurricane Ida battered the Gulf Coast, causing severe flooding and leaving communities of color without power for weeks. This makes them intimately familiar with the structural problems that need resolving to prevent damages from climate disasters.

“Climate change has led to heavier and more frequent rain events in New Orleans. Combined with an antiquated drainage system, extensive and dangerous flooding has become commonplace. Stormwater management remains not only one of the biggest challenges we face, but it also presents one of our biggest opportunities,” said Louisiana State Representative Royce Duplessis (District 93). “New Orleans can and should become a global leader in green infrastructure. This consortium of neighborhood-based organizations taking the lead on new green infrastructure projects should be celebrated, studied and replicated. This is an example of leadership and innovation, because they are not waiting on government. These green infrastructure projects will serve as a catalyst for community education, empowerment and long-term sustainability.”

“Despite a lack of government funding, Black communities have designed an ingenious network of green infrastructure in New Orleans to solve for and mitigate flooding in their communities,” said Lois R. DeBacker, managing director of The Kresge Foundation’s Environment Program. “The community-based planning process led by the collective of Water Wise Gulf South organizations is a national model, which could be supported by philanthropy in other places. It lays the groundwork for government investment in green infrastructure that will serve often-underinvested BIPOC communities well. The Kresge Foundation is proud to support these talented New Orleans leaders and their partner, Earth Economics.”

About Healthy Community Services: Healthy Community Services is a 501c3 non-profit organization located in the 7th Ward of New Orleans, LA. The organization works in collaboration with Water Wise Gulf South and the Greater Tremé Consortium on the Water Wise Tremé and Water Wise 7th Ward Initiative. It provides residents and business owners with an understanding of urban storm water management techniques, how the drainage system of New Orleans works, improving the water quality of Lake Pontchartrain as wells as how green infrastructure reduces subsidence by increasing the water table levels. Learn more at hcsnola.org.

About The Kresge Foundation: The Kresge Foundation was founded in 1924 to promote human progress. Today, Kresge fulfills that mission by building and strengthening pathways to opportunity for low-income people in America’s cities, seeking to dismantle structural and systemic barriers to equality and justice. Using a full array of grant, loan and other investment tools, Kresge invests more than $160 million annually to foster economic and social change. For more information visit kresge.org.

About Institute for Sustainable Communities: The Institute for Sustainable Communities is in the business of unleashing the power of people to transform their communities. Their approach ensures solutions emerge from within the community, rather than being imposed from the outside. By sharing international best practices and experience, providing technical expertise and training, and building the capacity of local organizations, they are sparking creative solutions and lasting change. Learn more at sustain.org.