Seth Beattie has joined The Kresge Foundation as a program officer with the foundation’s Arts & Culture Program, where he will help advance the program’s goal of using Creative Placemaking to integrate arts, culture and community-engaged design into development and urban planning.

Beattie was born in metro Detroit and spent most of his professional career in Cleveland, Ohio where he has worked at the intersection of arts and community development since 2004. He is founder of Spire + Base, a consulting firm advising nonprofits in the development of Creative Placemaking strategies. 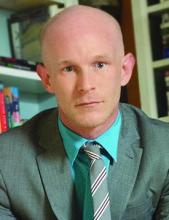 A graduate of Franklin College where he earned a bachelor’s degree with majors in political science and public relations, Beattie also has a master’s degree in public administration from the Levin College of Urban Affairs at Cleveland State University. He also has completed 430 hours of immersive Spanish language instruction.

Beattie said he is excited to help Kresge equip community organizations to establish more equitable and sustainable Creative Placemaking practices in underserved communities across the country.

“American cities are in the midst of an incredible renaissance, due in part to the contributions of artists and cultural organizations. I’m thrilled to help communities build on this momentum, particularly with an eye toward ensuring that positive change is realized by all community members and not a select few,” he said. “Kresge is an ideal place to make that contribution.”