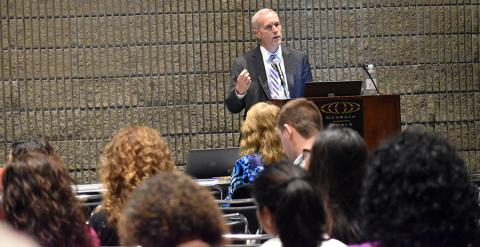 Ensuring that all people are able to protect themselves from the physical, financial and mental health effects of climate-fueled impacts was the focus of the American Public Health Association’s (APHA) annual conference this week – and The Kresge Foundation helped amplify the message through attendance, participation and sponsorship of the gathering.

The impacts of climate change – more intense heat waves, catastrophic flooding, drought and stronger storms – are particularly harmful for people without the means to properly prepare for to rebuild their lives following devastating events, said David Fukuzawa, managing director of the Health and Human Services programs.

“We share APHA’s recognition that our nation must do a much better job of planning for the increasingly harmful health effects of climate disruptions,” said Fukuzawa. “From western forest fires to the recent spate of destructive hurricanes, it’s clear that the time to fully address these threats is now.”

To that end, some 13,000 public health professionals and others gathered at the APHA conference in Atlanta from Saturday through Wednesday to explore methods to better prepare communities – particularly low-income and underserved communities of color – against the most damaging health effects of catastrophes borne of a more volatile climate.

In preparation for the conference, APHA published a Kresge-authored analysis titled “Bridging Climate, Health and Equity: A Growing Imperative” that explored how underserved communities are typically hit “first and worst” by climate impacts and how to create policies and strategies to better address such disparities. Kresge was also a primary sponsor of the conference.