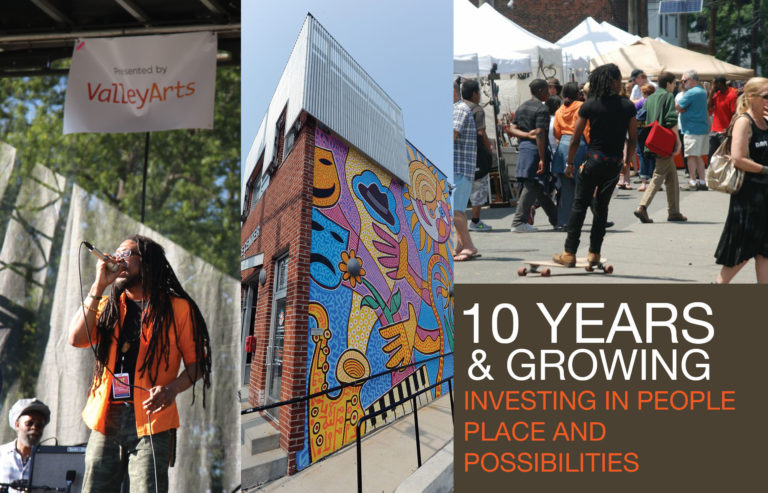 Creative Placemaking is the integration of arts, culture and community-engaged design into community development. It capitalizes on the unique attributes of a community, realizes residents’ and merchants’ vision, welcomes newcomers and supports social and economic mobility for all. Kresge’s Arts & Culture Program has funded Creative Placemaking efforts since 2013.

In recent years, Kresge’s Social Investment Practice and Arts & Culture team made a commitment to engage in a mutual learning journey. The goal was for the impact investing team to learn the fundamentals of Creative Placemaking and for both teams to better understand the capital barriers to investment in the systemic integration of arts and culture into community revitalization. At Kresge, we wanted to highlight early adopters, determine the current state of Creative Placemaking lending among Community Development Financial Institutions (CDFIs), and advance a national discussion on the opportunities for investment in Creative Placemaking.

These efforts revealed several willing partners and innovators in the CDFI field. One early adopter was New Jersey Community Capital (NJCC), a partner to several longtime Arts & Culture grantees in New Jersey and a CDFI already financing Creative Placemaking projects. In 2015, Kresge made a $300,000 grant and a $2.5 million program-related investment (PRI) to NJCC to help launch its Creative Placemaking Fund. Within two years of receiving the Kresge grant, NJCC has attracted $5 in additional capital for every $1 of seed money invested, a full year ahead of projection.

For a community to truly thrive, it needs a vibrant educational and cultural life. NJCC’s Creative Placemaking work simultaneously revitalizes communities by putting underutilized real estate to productive use — providing affordable housing, arts programming and businesses that attract further investment — and by creating community cohesion and enriching the intellectual fabric of the community.

One of NJCC’s first Creative Placemaking loans was to the Valley Arts District in Orange and West Orange, in collaboration with a longtime grassroots community redevelopment organization, HANDS. “The Oranges” were historically an industrial center. Job losses in the manufacturing sector over time led to economic deterioration and disinvestment, closed businesses, abandoned commercial properties and vacant homes. While economically challenged, Orange has many assets, including great transportation, stately buildings and – most importantly – a highly engaged community.

NJCC and HANDS have enjoyed a partnership for more than a decade, which has included financing for redevelopment and affordable homes. Together with other partners, HANDS has created artists’ studios, artist live/work spaces, galleries, theater space, a hydroponic farm and more. Its strategy is to locate highly visible, high-impact properties for redevelopment. It also rehabilitates underutilized scattered sites, such as a mixed-use building with art retail and eight live/work artists’ spaces.

In southern New Jersey, NJCC invested $6.75 million through a New Markets Tax Credits transaction for the Cumberland Community College Arts and Innovation Center, an off-campus expansion of the educational institution that concentrates on fine arts, journalism and design. The college’s facilities include gallery space, retail space, studios and classrooms. The project has become a centerpiece and economic engine for the revitalization of Millville’s Glasstown Arts District as well as other areas of southern New Jersey. NJCC also financed the Glasstown Creative Enterprise Center in Millville, which includes four artists’ studios, a business incubator, shared workspace, storage and conference areas, and a residential apartment.

NJCC also provided smaller grants to advance local initiatives in Millville, including arts-based entrepreneurship training and the creation of an “arts alley” in nearby Hammonton, as well as aesthetic upgrades such as improved facades in Hammonton and other nearby towns. These efforts clearly demonstrate how Creative Placemaking investments can revive a struggling economy.

While the Jersey City area has experienced significant population growth and financial investment in the past decade, parts of the city remain distressed. One such Jersey City neighborhood is the “Heights,” where Creative Placemaking has emerged as a primary revitalization tool and collaboration construct for the neighborhood and led to the creation of the Riverview Arts District. Through a separate technical assistance grant, funded by the National Endowment for the Arts and Kresge, Local Initiatives Support Corporation (LISC) selected Jersey City’s Riverview Arts District and NJCC to work with local stakeholders to fuse arts, culture and design with urban planning and community development to provide affordable homes, arts community centers and live/work artist spaces.

The technical assistance grant provided consultant services to walk stakeholders through a visioning and goal-setting process and ultimately the development of a business plan. This effort resulted in various district neighborhood and civic organizations forming a new collaborative — HeightSpace LLC. NJCC is in the process of acquiring a long-vacant building to serve as the cornerstone of a redevelopment project. It will be rehabbed to provide 15 units of housing for artists and space for HeightSpace to conduct its programming, which will include festivals, exhibits, concerts, employment and educational opportunities. While the project is encouraging arts-based activities, it’s also repurposing an abandoned building, a significant benefit to the community in itself. As an illustration of Jersey City’s support of Creative Placemaking and the formation of the Jersey City Riverview Arts District, the city amended relevant zoning ordinances to allow “the right to establish artist studios and live/work environments.”

NJCC believes that creative placemaking and harnessing the creative economy are vital strategies for and powerful drivers of quality of life improvements in low-income communities. NJCC will continue to build on and share lessons learned from the Creative Placemaking Fund. Together with Kresge and other key stakeholders as strategic and thought partners, NJCC hopes to establish the Creative Placemaking Fund as a proven approach and replicable model for catalyzing local and creative economies and revitalizing neighborhoods through strategic investments in arts and culture and community-engaged design.