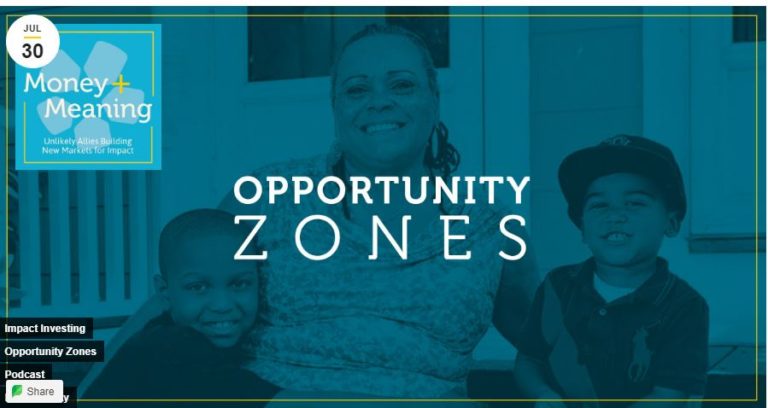 Kresge’s Social Investment Practice has worked since 2018 through its investment portfolio, convening power and grant making to have an influence, however small, on the emerging Opportunity Zones market. Why? Because this market, estimated to be potentially hundreds of billions of dollars, will land via investment funds and projects on the ground in low-income communities in the coming months.

That could be a good thing, if investors and fund managers follow the well known (in the community development sector, at least) best practices of engaging with low-income communities… and if they track their impact beyond dollars invested…  and if they act with transparency, making it clear that their funds are benefitting from the Opportunity Zones rules… and if they invest in the kind of projects that give local residents better access to employment and other social benefits. It’s a lot of ‘ifs.’ And as written, there is nothing in the Opportunity Zones legislation that requires any of that. Without requirements for reporting, measurement and transparency, we at Kresge fear communities will get shortchanged while investors reap huge rewards in the form of current and future tax relief.

In recent weeks, Kresge staff were featured on two podcasts discussing this issue and our response to it.

First, on a new episode of Wharton Business Radio’s Dollars and Change, Aaron Seybert describes how Kresge’s ethos and longevity allows the foundation to take an extraordinarily long view on the issues being addressed. “These are not transactional relationships, but systems changes. That’s how we measure impact,” he notes.

In the second, Aaron joins our President & CEO Rip Rapson on SOCAP’s Money + Meaning podcast, where they discuss the foundation’s move to push for higher levels of reporting and transparency and how Kresge’s used exemplary guarantees to back two first-of-their-kind “impact-certified” Opportunity Zones funds. SOCAP writes on its blog, “What role might foundations play in ensuring that the capital invested into economically distressed communities is done so in such a way as to benefit both investors and communities alike? The Kresge Foundation, an institution that believes that the absence of capital is one of the most critical challenges facing low income communities in America today, is currently taking a leading role in answering that question.”

By committing $22 million in unfunded guarantees to two these funds, Rapson explains, Kresge aims to set a precedent for transparency in this new space and shape investments to benefit investors and communities alike.

“The idea here is not that two funds…will change the world, but they may signal to the broader investment community that this kind of fund assembly is possible–that you can pull together these Opportunity Zone funds in a way that helps people build businesses, secure homes, and otherwise benefit low-income communities.”

–Rip Rapson, President and CEO of the Kresge Foundation

As communities navigate a changing economy and the administration’s new programs, these new episodes shed light on how Kresge’s ongoing efforts to lift up cities across the country and make sure no one is left behind. Both episodes are available now!