Memphis communities partner to fight poverty and a pandemic 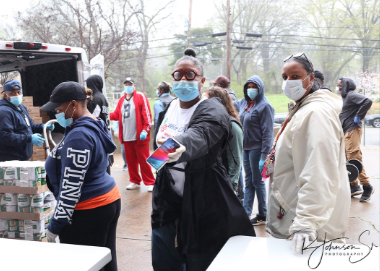 Natalie J. McKinney, Executive Director and Co-Founder of Whole Child Strategies (WCS), has been fighting entrenched systems of poverty long before the pandemic struck. Her career as a lawyer, educator, and policymaker for children and family well-being taught her to examine problems by trying to get to the root of them. So, when she saw kids in cities across the country not graduating high school on time or without college or career readiness — she asked a simple yet complex question — “why?”

Research indicates that more than 60 percent of factors associated with student academic success happen outside the school walls. The lack of quality affordable housing, food security, access to health care, mental health services, or parents’ employment can pose serious obstacles to student readiness. Failed policies, entrenched racism, and disinvestment have concentrated insecurity in low-income communities of color, creating a vicious cycle that can prevent Black and Brown children from achieving their education and career goals.

To address these challenges with a holistic, community-centered mindset, McKinney co-founded Whole Child Strategies (WCS) in 2017 in Memphis, Tennessee. WCS was designed to partner with a wide array of stakeholders: schools, businesses, community organizations and residents. Together they create a collective approach to equity and help students graduate on time, prepared with a college or career path for their future.

“We don’t make assumptions about what communities need,” McKinney noted. “The community itself has the experience and the expertise to identify needs, develop solutions, and implement long-term change.”

In the Memphis neighborhoods of Klondike and Smokey City, decades of disinvestment and neglect initiated a decline in population, schools, and businesses. In the once segregated city, the history of racial inequality is built into the very foundation of the buildings and the planning of the alleyways and streets. Once a bustling industrial hub, the closure of the Firestone Tire & Rubber Co. plant in 1983 led to boarded up businesses and empty blocks. In the years since, the populations of these two neighborhoods have plummeted, forcing public school closures and destabilizing educational opportunities for students of all ages.

“We say people need to be at the table — but the menu has already been set. We don’t just want to choose from the limited menu, we need community stakeholders to be a part of building the menu. That’s the way I see the table now,” said McKinney.

In Klondike and Smokey City, WCS gained a foothold by earning community trust and creating a network of local changemakers. In the summer of 2019, the newly formed Neighborhood Council hosted an inaugural block party with the express purpose of highlighting the tremendous talent and energy in the area — an important step in keeping current residents and attracting investment.

In October 2019, WCS was awarded a $50,000 grant from The Kresge Foundation’s American Cities Program, as part of the Kresge Innovative Projects: Memphis (KIP:M) initiative, to undertake a series of projects to improve educational attainment in the Klondike and Smokey City neighborhoods. Nineteen other community-based organizations throughout Memphis were also awarded a combined $2 million in grants to support resident-driven projects aimed at strengthening their neighborhoods.

But in March of 2020, the COVID-19 pandemic found its way into Memphis, threatening to undermine the recent progress. The virus shut down businesses, increased food and economic insecurity, and wounded the physical and mental health of vulnerable residents. Amidst a series of crises, McKinney and WCS, along with seven other neighborhood organizations, sprang into action, facilitating access to information and life-saving resources.

This coalition, dubbed the Coalition of Metropolitan Memphis Organizations for Neighborhood Services (COMMONS) and led by WCS, has become a vehicle for promoting the unified voice of communities in need in several Memphis neighborhoods and for facilitating aid to those communities including South Memphis, Frayser, Binghampton and Orange Mound. Other Kresge grantees participating in the COMMONS include the Center for Transforming Communities, Knowledge Quest and the Memphis Medical District Collaborative.

In May, the American Cities program awarded a $100,000 grant to WCS to support the COMMONS’ emergency relief efforts and $100,000 in general operating support.

Deploying the on-the-ground network already in place, the coalition set out to determine the top five most urgent needs of constituents. Surveys found that while most residents shared common concerns, their priorities differed. These findings offered essential context for determining how best to apply for and spend limited resources. Employment, food and cleaning supplies, internet devices and access, rent, and utility payments were on almost every list, providing a framework to triage support. Working with the COMMONS partners and local volunteers, WCS began taking grocery orders and providing cash payments to help residents pay rent and utility bills.

Knowledge Quest, for example, has distributed 250 technology devices and provided nutritious foods to families experiencing food insecurity through their Green Leaf Learning Farm and in partnership with the Memphis Food Bank’s mobile pantry.

Now, more than five months later, the groups are on a third round of community surveys, tracking the needs of residents as the virus resurges. In Memphis, the moratorium on utility cut-offs will be lifted on August 24th, likely triggering a devastating wave of electricity, gas and water cut-offs, leading to potential health-related concerns, as well as displacement and homelessness. WCS has been feverishly researching charters and documents from other cities that will help them advocate for new city programs that may help residents keep their utilities on and stay in their homes. New programs centered around income-based billing or bill credits, may provide some safety and stability during this crisis.

McKinney tries to be optimistic, citing volunteers and partners like Kresge that helped WCS quickly pivot to address this unprecedented emergency. Other Memphis-based funders, including the Community Foundation of Greater Memphis also provided grant support to the COMMONS through its Mid-South COVID-19 Regional Response Fund.

But, she still conveys a deeply-held worry for the future of these resilient communities and the education of local students. “In our neighborhoods, the challenges that COVID revealed have always been here. We need to take this opportunity to make real, systemic changes that will result in better lives for kids and adults. We can’t just tweak anymore. If after COVID we return to the same systems of the status quo, it will be devastating.