Listening to students is the first step in boosting civic engagement 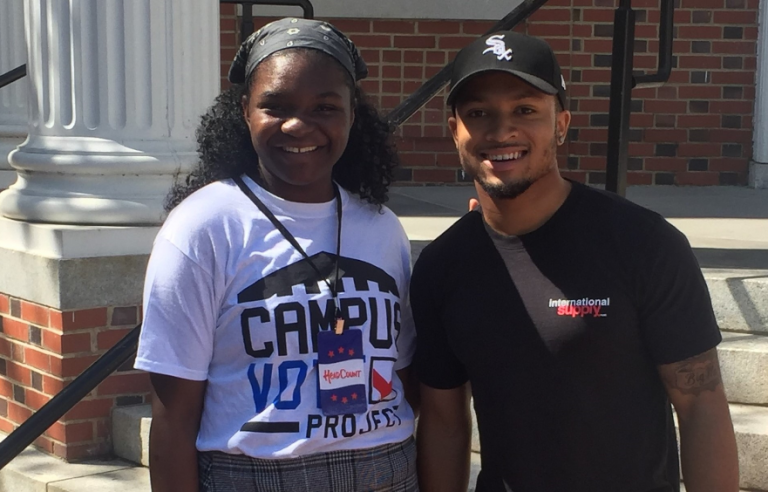 The Campus Vote Project, a Kresge Education Program grantee partner, works with universities, community colleges, faculty, students and election officials to reduce barriers to student voting and empower students with the information they need to register and vote. Erika Neal, a recent graduate of Virginia State University, was instrumental in establishing a Campus Vote Project chapter at VSU. Now as a member of the organization’s national Student Advisory Board, Neal is sharing insights from her experience boosting civic engagement among her fellow students to support campus fellows working to do the same nationwide. Kresge spoke with Neal to learn more about what it takes to truly inspire students to become more civically engaged.

Kresge: What inspired you to establish a Campus Vote Project chapter at Virginia State University?

Erika: As an undergraduate, I observed that there wasn’t a lot being done to ensure that everyone on my campus was registered to vote. We also had a lot of issues with getting an on-campus polling location during the 2016 elections. During a conversation with Virginia State University President Makola Abdullah, he challenged me to turn my observation into action and said, “If you can find an organization that is willing help us on campus, let’s do it.”

Campus Vote Project emerged as a great fit because campus chapters are truly led by students. The organization helped Virginia State start a much-needed conversation about how students could get involved in local political pushes without getting too partisan which could mean running the risk of losing some funding resources.

I eventually became the first on-campus fellow. Soon after the initiative was established, students started asking about how to get involved. They wanted to know about issues beyond our campus and help with things going on around our community. Eventually, we created the Student Voting Coalition which grew to about 25 students.

Kresge: What strategies did you use to encourage your fellow students to become more civically engaged?

Erika: Students become civically engaged when they channel their why. There’s a lot that brings diverse populations to this work. Some of those reasons might very well be personal.

I once met a student who was tired of seeing his mom living paycheck to paycheck. I connected him with local organizations working for equal pay for women and to raise the minimum wage.

“Instead of being angry and sitting with that, let’s turn that into some action,” I told him. “The first step to action is researching and understanding the issues that are important to you.”

Working on issues related to his personal experience drew him into civic engagement. He became inspired to get involved locally and naturally made the connection to why he should vote.

I also did workshops with students about how to become civically engaged. The workshops taught students skills to use their voice and their votes to advocate for their communities. My favorite one “How to Hold Your Elected Officials Accountable” was great because it didn’t necessarily depend on what candidate you’re rooting for. It was all about helping students become more comfortable with voting and engaging with politicians about their legislative records.

Kresge: You now serve on Campus Vote Project’s national Student Advisory Board. What on-campus reflections inform your work at the national level?

Erika: When students don’t feel heard on their campuses, they’re less likely to participate outside of campus. For students, trust means trusting that their vote means something and that their voice means something in the space they occupy. I always stress to administrators that listening to students is the first step.

When on-campus organizing efforts are blocked, it can deter students from being civically engaged in their off-campus community. When students have safe spaces, they feel empowered.

Kresge: The pandemic, its related health and economic impacts and the movement against racial injustice have made 2020 has been a year unlike any other. How are efforts to get out the vote and inspire civic engagement evolving?

Erika: This year is teaching organizers that organizing must be about what is most important to the community. Today, I rally students around their frustrations about the coronavirus. That includes would-be students who were told previously that they couldn’t enroll because online programs weren’t available. Now that most classes are online, those individuals are saying, “Wait a minute!”

Tuition prices are another issue that comes up in our organizing. Schools are trying to charge full tuition for online courses. Students deserve better, especially given that our generation has so much loan debt.

Things like the digital divide shouldn’t exist. It’s 2020! How are we talking about 5G and we don’t have internet access in rural areas? How can we evolve our internet connections and our cellular service but completely leave whole communities behind?

Organizers are adapting to this new space by letting the community voice their greatest frustrations. Talking about the issues that are most important to students is how I get them to think and talk about voting.

The Campus Vote Project’s national Student Voting Network has become a go-to resource for campus organizers, especially during the pandemic. It helps campus fellows connect with each other, share advice and find resources. I love that the network is run and led by students.

Kresge: How has civic engagement and organizing informed your future aspirations?

Erika: Civic engagement is my first love. I would do this work without being paid any day of the week because it matters.

Campus Vote Project challenged me to think about politics in a different way. I developed as a student organizer and became knowledgeable about voter engagement.

I want to take those skills along with my passion for public health to the World Health Organization and ensure that governments are doing what they need to do to protect vulnerable communities, especially with respect to the ongoing struggles of Black Americans.

I am no longer am accepting that other people will do the work to protect our communities. Every time that we’ve done that, it has ended up harming us. I’m not here to right any wrongs that I didn’t create. I am here to provide protection against any wrongdoing that is happening after the original sin of the United States, slavery. How we create civic policy is entirely up to us. But we need to be protected.

Erika Neal is pursuing a master’s degree in public health at the University of California, Berkeley.