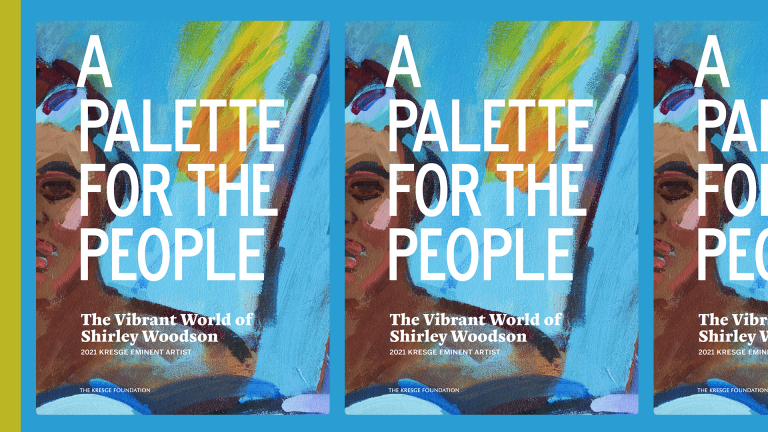 “A Palette for the People,” a monograph on the life, art and community contributions of 2021 Kresge Eminent Artist Shirley Woodson is now available for downloading and ordering at no cost, while supplies last.

Earlier this year, Woodson — superb figurative painter, arts educator, advocate and organizer — was named the 13th Kresge Eminent Artist. The annual honor for a metro Detroit artist is based on a lifetime of artistic excellence and contributions to their chosen art forms, and for contributions to the cultural community of metropolitan Detroit. The recognition comes with a $50,000 cash award, plus the creation of the monograph and a short film.

Beyond her evocative work on canvases and other media, Woodson was recognized for devoting decades to broadening education and exhibition opportunities for generations of African American artists, and for championing art as an essential lens into history and culture.

The monograph was created by editor-lead writer Nichole Christian and art director Patrick Barber in partnership with Kresge’s Communications Department. Wendy Lewis Jackson, managing director of Kresge’s Detroit Program, formally presented the monograph to Woodson last Friday at a small gathering preceding the public opening “Shirley Woodson: Why Do I Delight” at Detroit Artists Market. The exhibition, which runs through Oct. 23, spans Woodson’s career and places her work alongside the art of six of her proteges.

Subtitled “The Vibrant World of Shirley Woodson,” “A Palette for the People” traces Woodson’s life, from her parents’ arrival in Detroit with three-month-old Shirley — seeking greater opportunity for themselves and their first-born than the South they left behind — to Woodson’s birth and youth in Detroit where her talent was recognized in her kindergarten class and nurtured both at home and at schools. The monograph covers the evolution and themes of Woodson’s mature art; her career as an educator-administrator in the Highland Park, Michigan, and Detroit schools; her efforts as an advocate, organizer and mentor for African American artists; her collaboration with Detroit’s iconic Broadside Press and more.

“A Palette for the People” also includes reflections on her work through the eyes of her artist-son Senghor Reid, gallerists Dell Pryor, gallerist-artists Jocelyn Rainey and Yvette Rock, art historian Camille Brewer and artist Allie McGhee. Most important, the 9-by-12 inch, 80-page book displays numerous examples of Woodson’s work across her career.

“From its size to its title, to the careful selection of contents and colors, we knew this book had to be an enveloping, multidimensional, conversation, in the same ways that Shirley’s lived her life,” said writer-editor Christian, who along with book designer and photographer Barber spent numerous hours with Woodson in her northwest Detroit studio in preparation for the book. Christian said it was “a deep thrill to try to bring a measure of her world to life.”

Woodson, at 85, continues with a busy painting schedule in northwest Detroit studio, which she shares with her likewise lauded artist son Senghor Reid. She frequently paints to what is commonly called jazz, listening on a 20-disc CD player, a gift from her late husband Edsel Reid, from whom she learned to love the music that she, as Edsel did, refers to as “Black Visionary Music.”

A one-time music host on Detroit’s WDET-FM, Reid’s weekly sign-off was “I’ll see you listening.” Woodson says she’s painting to the sounds of John Coltrane, Etta James, Pharaoh Sanders and others, she often imagines Reid listening too.
At Kresge’s request, she compiled a playlist of some of her favorites, curated here as a Spotify playlist, taking Reid’s sign-off as its title.

One of Woodson’s works, “Martha’s Vandellas,” subject of a monograph appreciation by fellow artist Allie McGhee, is included in the exhibit “Harold Neal and Detroit African American Artists” showing through Oct. 20 at the University Gallery, School of Art and Design, at Eastern Michigan University in Ypsilanti. McGhee and Woodson will be part of a panel following the closing reception on Oct. 12.

The Harold Neal show will later be at Elaine L. Jacob Gallery on the Wayne State University campus Nov. 4 through Jan. 20, 2022.
Woodson is the juror for Scarab Club’s annual member exhibition, which opens on Nov. 17. As part of the opening, Woodson will sign the club’s beam, joining past Kresge Eminent Artists Marie Woo, Charles McGee and Bill Rauhauser and international such nationally and nationally and internationally acclaimed artists as Norman Rockwell, Isamu Noguchi, Diego Rivera and Marcel Duchamp.

Finally, the Detroit Institute of Arts will present 10 of Woodson’s painting from her “Shield of the Nile” series begun in 1984. The dreamlike paintings selected for “Shirley Woodson: Shield of the Nile Reflections” explore “the Nile as a metaphor for Africa by combining figuration and expressionism to symbolize the metamorphic, historical, spiritual, and cultural significance of this ancient body of water.” That show runs opens Dec. 18 and runs through May 29, 2022.