Kresge welcomes two new members to foundation’s Board of Trustees 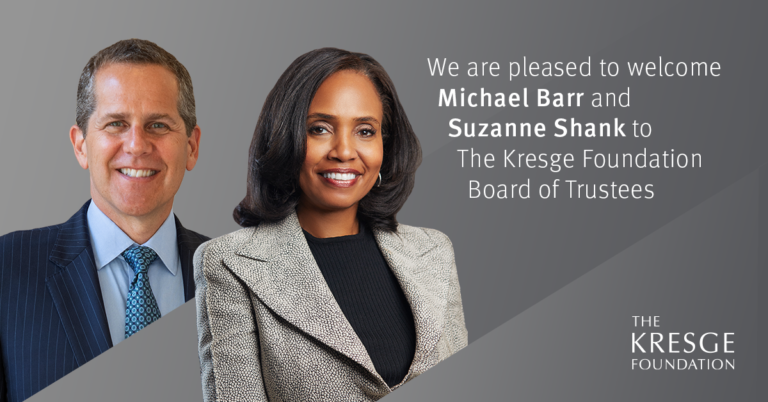 I’m pleased to share that two new trustees, investment banker Suzanne Shank and finance scholar Michael Barr, have joined The Kresge Foundation board. We could not be more humbled by their experience, their expertise, and their dedication to public service. Their work and influence have taken them into cities across the country, from Detroit to Washington, D.C. to New York, and all places in between. They will deepen and extend Kresge’s aspiration to improve the bedrock conditions of equity and opportunity in this nation’s cities.

Suzanne leads and is majority-owner of the nation’s top ranked minority and woman owned (MWBE) investment bank, Siebert Williams Shank & Co., LLC (SWS). Prior to forming SWS through a merger in 2019, she was CEO of Siebert Cisneros Shank, LLC, a firm she co-founded in 1996, which grew to become the first MWBE firm to rank within the Top 10 among U.S. municipal debt underwriters and the first MWBE to lead a municipal underwriting over $1 billion in principal amount.

Suzanne is from Savannah, Georgia, but made metro Detroit her home several years ago and quickly became active in the local community.  She is a graduate of the University of Pennsylvania’s Wharton School and the Georgia Institute of Technology, where she earned an MBA in finance and a Bachelor of Science degree in civil engineering, respectively. She is a board member and advisor to a number of industry and civic organizations including Consumers Energy Company, Rocket Companies, the Charles  H. Wright Museum of African American History, Wharton School Graduate Executive Board, Spelman College and Global Citizen.

Michael Barr makes his home in Ann Arbor, Michigan, where he is dean of the Ford School of Public Policy, the Frank Murphy Collegiate Professor of Public Policy, and the Roy and Jean Humphrey Proffitt Professor of Law at University of Michigan Law School. He is the founder and faculty director of U-M’s Center on Finance, Law, and Policy, and co-founded the Detroit Neighborhood Entrepreneurs Project. He’s a prolific researcher and author who writes about a wide range of issues in domestic and international financial regulation, with a particular emphasis on financial services for low-income communities.

Among the many senior roles Michael has previously held at the highest levels of government, he was assistant secretary of the Treasury in the Obama Administration and was a key architect of the Dodd-Frank Wall Street Reform and Consumer Protection Act of 2010.  He earned his law degree from Yale Law, a bachelor’s degree in history from Yale University, and a master’s degree in international relations as a Rhodes Scholar at Oxford University. He serves or has served in a wide variety of advisory roles for national and international organizations including the Bill and Melinda Gates Foundation, the Future of Finance Initiative (India), the FDIC Advisory Committee on Economic Inclusion, and the Washington Center for Equitable Growth.

As you might imagine, the honors both Suzanne and Michael have received could extend another 10,000 words. But the words used to describe each are remarkably consistent: brilliant, principled, compassionate, tenacious, kind, selfless. As we’ve come to know them, each of these rings true. We are profoundly privileged to have them add their knowledge, experiences, and passion for community to Kresge’s work.

Our Board Chair Elaine Rosen agrees that Suzanne and Michael are extraordinary additions to our board. “Their individual expertise in finance and banking and combined community development leadership – specifically in low-income communities – will further bolster the foundation’s efforts to expand opportunity for people living in America’s cities,” she said.

I couldn’t have said it better.

I want to thank Cynthia Kresge, a foundation trustee and great-granddaughter of our founder Sebastian S. Kresge, for leading this trustee search process. In fact, Cynthia has conducted four successful board searches in as many years, resulting in equally phenomenal new members Kathy Ko Chin (president of the Asian & Pacific Islander American Health Forum), Cecilia Munoz (presently on a leave of absence), John Fry (president of Drexel University) and Richard Buery (president of Achievement First, a network of 37 charter schools).