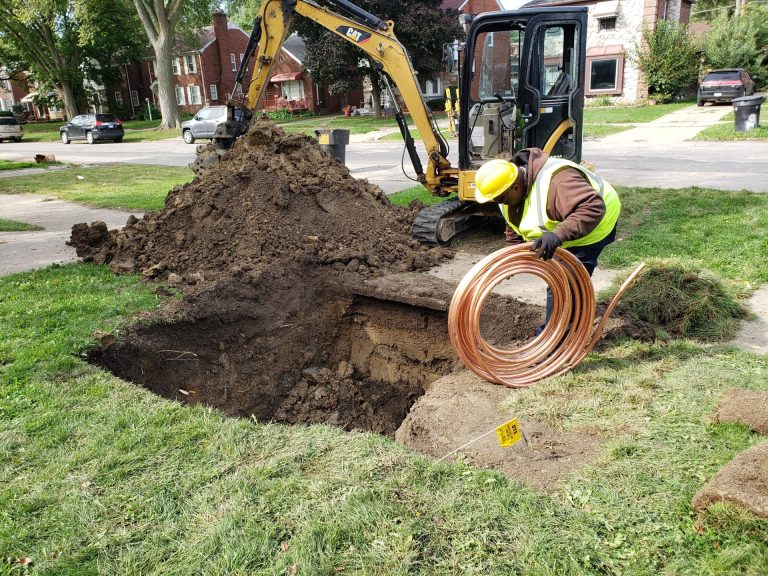 The Detroit Water and Sewerage Department will save an estimated $165 million and advance efforts to replace the city’s lead service lines to homes through use of an innovative technology to predict where the troubled lines are located.

Detroit’s effort using the technology of the organization BlueConduit, announced in a recent media briefing, is funded by The Kresge Foundation, the Rockefeller Foundation and the Michigan Department of Environment, Great Lakes & Energy (EGLE).

Detroit, as all Michigan cities, faces a January 2025 deadline for providing EGLE an inventory of lead service lines and a 20-year requirement to replace them. The city began the replacement effort in 2018.

EGLE is allowing and encouraging the water providers to use predictive modeling as an alternative to excavating every stop box on every property with city water service to verify the service line material prior to that deadline — at $500 to $600 per property and an estimated cost of $165 million.

Adapting machine learning techniques pioneered in addressing the lead-in-water crisis in Flint, Michigan, BlueConduit will build data bases of service line installation and other records going back decades, along with such features as age of houses, lot sizes, cost and area of city, and also use what is found when stop boxes are checked to develop predictions on the likelihood of where else lead service lines will or won’t be found.

Co-founded by University of Michigan professor Eric Schwartz and Georgia Tech professor Jacob Abernethy, BlueConduit is a for-profit social enterprise. Following the development of its predictive modeling in Flint, BlueConduit is now working in more than 50 cities with the Rockefeller Foundation supporting work in Benton Harbor, Michigan; Toledo, Ohio; and Trenton New Jersey, in addition to joining Kresge and EGLE to support the Detroit work.

“We are going to do our absolute best to use all of the data science and machine learning and expertise and software that we have developed to aim to reduce the time Detroit residents are living with lead,” said Schwartz.

And BlueConduit President and COO Ian Robinson emphasized that their system is designed to remove any “biases in the underlying information” that feeds into the statistical models to avoid any questions about the equity of the work. Robinson called that “a critical component” of working with the Detroit Department of Water and Sewerage.

Kresge Detroit Program Senior Program Officer Bryan Hogle said that through the partnership with the funders, the city and BlueConduit, “a problem of almost unimaginable scope has become imaginable and manageable,” putting city on a path to make the potential danger of lead in drinking water a thing of the past.

Even with the cost-saving of BlueConduit’s predictive model slashing the cost of surveying all the city’s service lines, the replacement project is estimated to cost $450 million.

“The Biden Build Back Better infrastructure bill is going to be critical,” said Palencia  Mobley, deputy director and chief engineer for the Detroit Water and Sewerage Department.