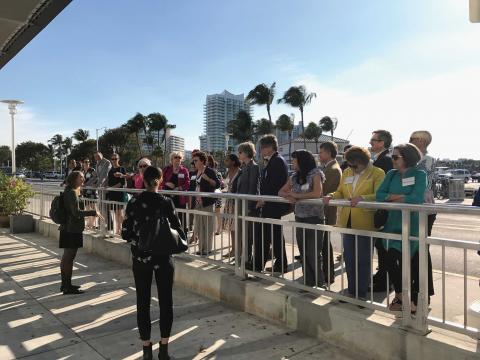 The Kresge Foundation’s Environment Program will continue its focus on helping U.S. cities build resilience in the face of climate change after the Kresge Board of Trustees affirmed the program’s goal and direction following a strategy review.

Trustees approved minor modifications to the program’s strategy that represent a clarification of desired outcomes as opposed to a significant shift in direction.

A comprehensive approach to climate resilience includes reducing a community’s contribution to heat-trapping greenhouse gas emissions (mitigation); preparing for the impacts of climate change that can no longer be avoided, such as flooding, intense storms and high heat (adaptation); and strengthening the connections between people and institutions within a community (social cohesion).

Information on the Environment Program’s strategies is available on the program’s web page.

Lois DeBacker, managing director of the Environment Program, said seismic changes in the federal policy landscape make the climate-resilience work supported by Kresge even more important. “While the political context is now more challenging, the urgency to act on climate change remains, as does the imperative to ensure that low-income people and communities of color are meaningfully engaged in decision-making processes relevant to climate resilience.”

DeBacker said the program will put renewed effort into the capture and dissemination of promising practices, use of multiple forms of capital to leverage change, and explicit consideration of racial equity in climate-resilience efforts.