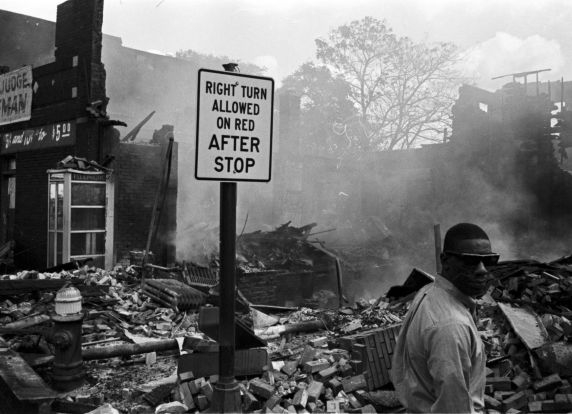 Four days and 50 years ago today, the Detroit rebellion began with a heavy-handed, undermanned police raid on an illegal drinking spot at the intersection of 12th and Clairmount. The raid-gone-wrong was conducted by a squad of all-white officers in a predominantly African-American neighborhood in the wee hours of a hot summer night.

A man walks by still-smoldering buildings destroyed in the Detroit rebellion of 1967. Some 388 families were displaced by the unrest. More than 2,500 stores were burned or looted.

Fifty years ago today as the violence subsided – after 43 deaths, more than 1,700 injuries, more than 3,000 fire calls, more than 7,000 arrests, and immediate losses of $242 million in today’s dollars – Detroiters turned to the hard task of rebuilding. They buried their dead, tended their wounded, swept broken glass, searched for new housing. With nerves still raw, they struggled to restore day-to-day civilities. Civic leaders, 500 strong, gathered in what would evolve, in short order, into the organization New Detroit, which continues today on its mission to grapple with causes of unrest. Many threw themselves with new urgency into the politics of a changed landscape, bringing black Detroiters their first decisive voice in municipal politics.

In this anniversary year, many of us in Detroit are revisiting what this all means. We listen to the voices of those who were there. We read the multiple interpretations from lay scholars and academics. We watch films and media coverage about Detroit’s darkest hours. What were the causes? What does the rebellion appropriately symbolize – and what does it mask? What can the past tell us about moving forward?

Just a few Kresge Foundation staff witnessed the rebellion – and lived through the city’s immediate recovery efforts. But in our work in Detroit and in cities across the nation, we have all come away from this anniversary with certain convictions.

Looking back, we see the rebellion not as the cause of the city’s decline, but a painful punctuation point in a pattern of white flight and disinvestment – abetted by federal policy — that began decades earlier.

Surveying the landscape of Detroit today, we see signs that decades of work across multiple sectors have created the strongest signs of revival yet in the downtown and Midtown areas. But Detroit is much, much more than downtown.

We see the hard work of neighborhood organizations taking hold across the city as they attempt to spark turnarounds, beginning with a reclaimed building here, a greenspace or a youth program there. Supporting the revival of neighborhoods is the most urgent work of our Detroit portfolio.

Looking ahead, we are cognizant of how much work remains to be done. The task of those who truly care about Detroit – and who care about the Detroits we work in across the nation – is to ensure that cities see revivals that are both broad-based and inclusive. It is essential that neighborhood revivals honor the sacrifice of residents who stayed and fought for a generation or more to become part of a better Detroit for themselves and their neighbors.

And we remind ourselves of the Detroiters – particularly leaders – who either thought they could hold back social progress, or were too comfortable with its gradual pace before those fateful five days in July. In looking ahead, it behooves us to listen with utmost humility to voices like those that fell on deaf ears at 12th and Clairmount.