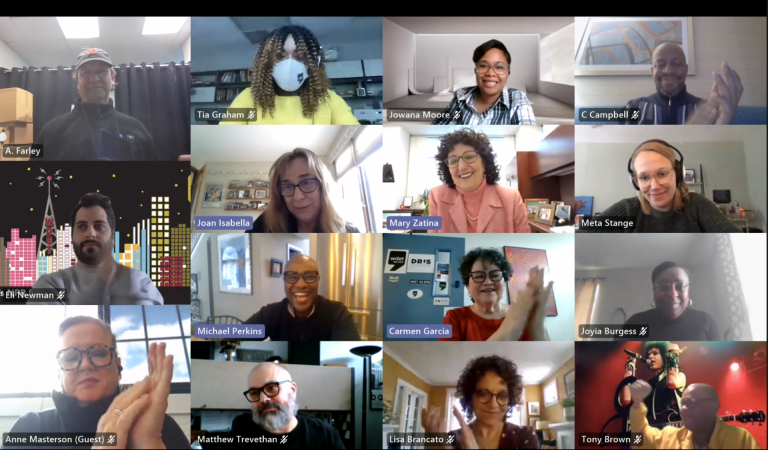 WDET staff got word of the Kresge grant during a Zoom call Wednesday.

The Kresge Foundation and WDET — Detroit’s NPR station — today announced a foundation grant to replace the station’s aging and failing transmitter to ensure over-the-air broadcasts for years to come.

Station general manager Mary Zatina said that Kresge’s grant of $150,000 complements more than one thousand donations, large and small,raised from generous WDET listeners during the station’s on-air spring fundraiser and together will allow the station to purchase and install a new transmitter by this summer.

“We are thankful that The Kresge Foundation, like our listeners, understands the value of the programming that we bring to the Southeast Michigan community day in and day out,” said Zatina.  “Our digital presence is important; it reaches listeners around the world. But our over-the-air signal is essential to make the station broadly available across our region to anyone who can tune in. Roughly 80 percent of our audiences listens to us via traditional radio.”

“For decades, WDET has been a go-to place on the radio dial for news, information, music and cultural programming. We readily recognized the importance of the transmitter as an access issue for metro Detroiters,” said Wendy Lewis Jackson, managing director of Kresge’s Detroit Program. “This station is an irreplaceable local voice that’s rooted in our community; it’s a unique place for discussion of the vital issues that shape our future and for elevating arts and cultural elements that contribute to our social bonds.”

The station reported earlier this year that both its 21-year-old transmitter had failed and its 34-year-old back-up transmitter was having severe problems, compromising sound quality and endangering broadcast continuity.  WDET knew the equipment was past its prime but had hoped to extend the life of the current equipment as it raised the funds needed to purchase new technology.

With Kresge’s support, a new transmitter will restore the clear, crisp sound listeners are accustomed to in the next few months. Furthermore, audiophiles will notice the return of HD Audio (a high definition sound format) for the first time since 2012.

The total cost for the purchase and installation of the new transmitter is approximately $180,000.