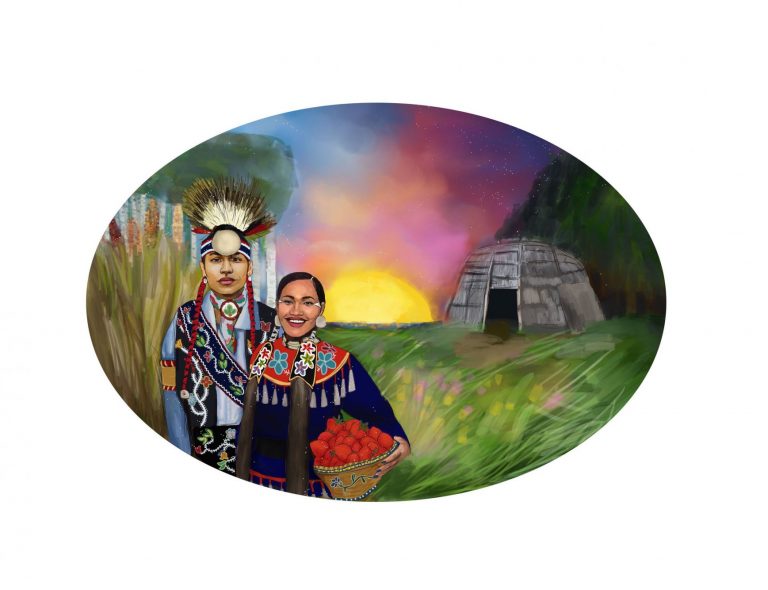 Detroit-based artist Joelle Joyner’s commemorative illustration of two young adult Anishinaabes will be the basis for a land acknowledgement artwork that will be displayed at The Kresge Foundation.

As part of Kresge’s commitment to more firmly center equity in our work to expand opportunities in American cities, the foundation has formally adopted Indigenous Peoples’ Day as an official holiday and has embarked on a land acknowledgement journey to recognize the ongoing relationship between Native Americans and the land we occupy.

The foundation has been engaged in an ongoing effort to broaden our understanding of the rich histories and cultures of Indigenous people and learn about the unique experiences and challenges they currently face.

“This learning journey has helped strengthen our intention to invest in the aspirations of Indigenous peoples and better support Native American communities and organizations,” said Kresge Detroit Fellow Joi James, who also co-leads an internal working group focusing on this work.

Kresge’s direct investment began in 2019 with a three-year membership grant to support Native Americans in Philanthropy (NAP) and its core mission of promoting equitable and effective philanthropy in Native communities.

In an effort to better serve and partner with Indigenous communities, Kresge staff also collaborated with NAP and other Indigenous-led groups to organize a two-day learning experience about the history of Native American peoples and the land that the Kresge Foundation headquarters occupies.

Kresge staff participated in a unique, participatory history lesson called The Blanket Exercise, which was developed in collaboration with Indigenous elders, knowledge keepers and educators and is intended to foster truth, understanding, respect and reconciliation among Indigenous and non-Indigenous peoples.

Following the educational experience, Kresge commissioned Detroit-based artist Joelle Joyner to design a land acknowledgement to honor the history of the site the foundation occupies.

Kresge’s headquarters in Troy, Michigan, is physically situated upon the ancestral and contemporary homelands of the Anishinabek and other tribal nations.

Joyner was also recently pictured in a viral photograph of four Indigenous women standing atop a marble column where a statue of Christopher Columbus formerly stood.

Joyner’s commemorative illustration depicts two young adult Anishinaabes, who are members of the Three Fires Confederacy – an alliance of tribal nations in the Great Lakes region that include the Ojibwe, Odawa, and Potawatomi tribes.

Both are dressed in contemporary powwow regalia with traditional floral beadwork. The woman wears a “jingle dress,” named for the healing sound the small bells make while dancing, which originates from Anishinaabe culture.

They are in a setting that represents traditions and practices of the culture, including corn, strawberries, a wigwam or sweat lodge, open water and sweetgrass.

The digital drawing will be the basis for an artwork that will be displayed at the foundation.

In addition to the land acknowledgement, Kresge is also committed to learning how to better support and fund organizations serving Indigenous communities. Despite Native Americans accounting for nearly 2% of the U.S. population, philanthropic funding accounts for less than 0.5% annually of U.S. foundation grant dollars, according to NAP.

Twenty percent of large foundations give to Native communities and causes. Even among this specific group, most give only a few grants, including Kresge.

The Centers for Disease Control reports that Native Americans are affected by COVID-19 at 3.5 times the rate of non-Hispanic whites and are more likely to experience health consequences.

“We view these grants not as one-off transactions, but as an entry point to learn more about their work, their network members, and the issues prioritized by urban Indigenous communities,” said Chris Kabel, senior fellow in Kresge’s Executive Office.