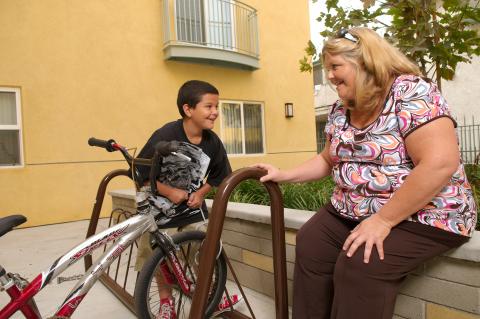 The Kresge Foundation is the latest funding partner in an unprecedented, multi-sector effort to annually triple the number of permanent supportive housing units in the City of Los Angeles. Kresge’s $1 million three-year grant and $6 million low-interest loan will help homeless Angelenos facing complex challenges to live with stability, autonomy and dignity.

As part of the Accelerating Permanent Supportive Housing Initiative, Kresge will join the California Community Foundation (CCF), Conrad N. Hilton Foundation, Weingart Foundation, the City of Los Angeles and nonprofit lenders and developers. Partners have committed $63 million in a revolving fund to launch 1,000 units each year.

Initiative partners have already seen how thousands of formerly homeless L.A. residents have found a place to call home in permanent supportive housing, where they can also get the mental health and substance abuse treatment they may need. Over the past 25-30 years, nonprofit housing developers have built nearly 10,000 units of permanent supportive housing in Los Angeles. But more needs to be done – and at a faster rate – to address our growing crisis.

“This initiative demonstrates the power in coordinating a multi-stakeholder response around an innovative model that improves outcomes and reduces costs,” said David Fukuzawa, managing director of Kresge’s Health and Human Services Programs. “By blending the work of health and human services, permanent supportive housing provides services while also working to address the systematic challenges that lead to homelessness. We hope that other cities experiencing similar pressures will be able to learn from this collaborative.”

To triple the number of units created, this effort is asking nonprofit developers to collectively start 10 to 15 new developments each year. Loans for developers will be managed by CSH, also known as the Corporation for Supportive Housing, through its Supportive Housing Loan Fund.

Kresge’s $6 million loan will support the fund as well as CCF’s efforts to raise additional resources through donor-advised funds (DAFs) for deployment as charitable investments.

“Making low-interest loans from DAFs is an approved use of those funds, but today the vast majority of DAFs are used as grant capital,” said Kimberlee Cornett, managing director of Kresge’s Social Investment Practice. “We know donors want to do the most good with their money and their dollars can potentially go further and be more impactful in the form of low-interest loans. We’re excited to work with CCF to help bring that opportunity to its donors and to direct more money into efforts to end homelessness in Los Angeles.”

A group of experienced nonprofit housing developers has been involved in identifying ways to streamline the system and accelerate production, including A Community of Friends, Clifford Beers Housing, LINC Housing, Los Angeles Family Housing, Mercy Housing California, New Directions for Veterans, PATH Ventures, Skid Row Housing Trust and SRO Housing Corporation. These and others may apply through CSH for loan funds, and through United Way’s Home for Good Collaborative for grant support, to cover the early costs of buying sites, developing plans and securing City approvals. The approval process will also be streamlined through the City’s Planning and Housing departments.

After securing approvals, developments will need long-term funding from private and public sources including state, federal and local sources. This November, the City of Los Angeles will also give voters the chance to approve a $1.2 billion bond measure – Proposition HHH – to finance new apartments for the homeless.